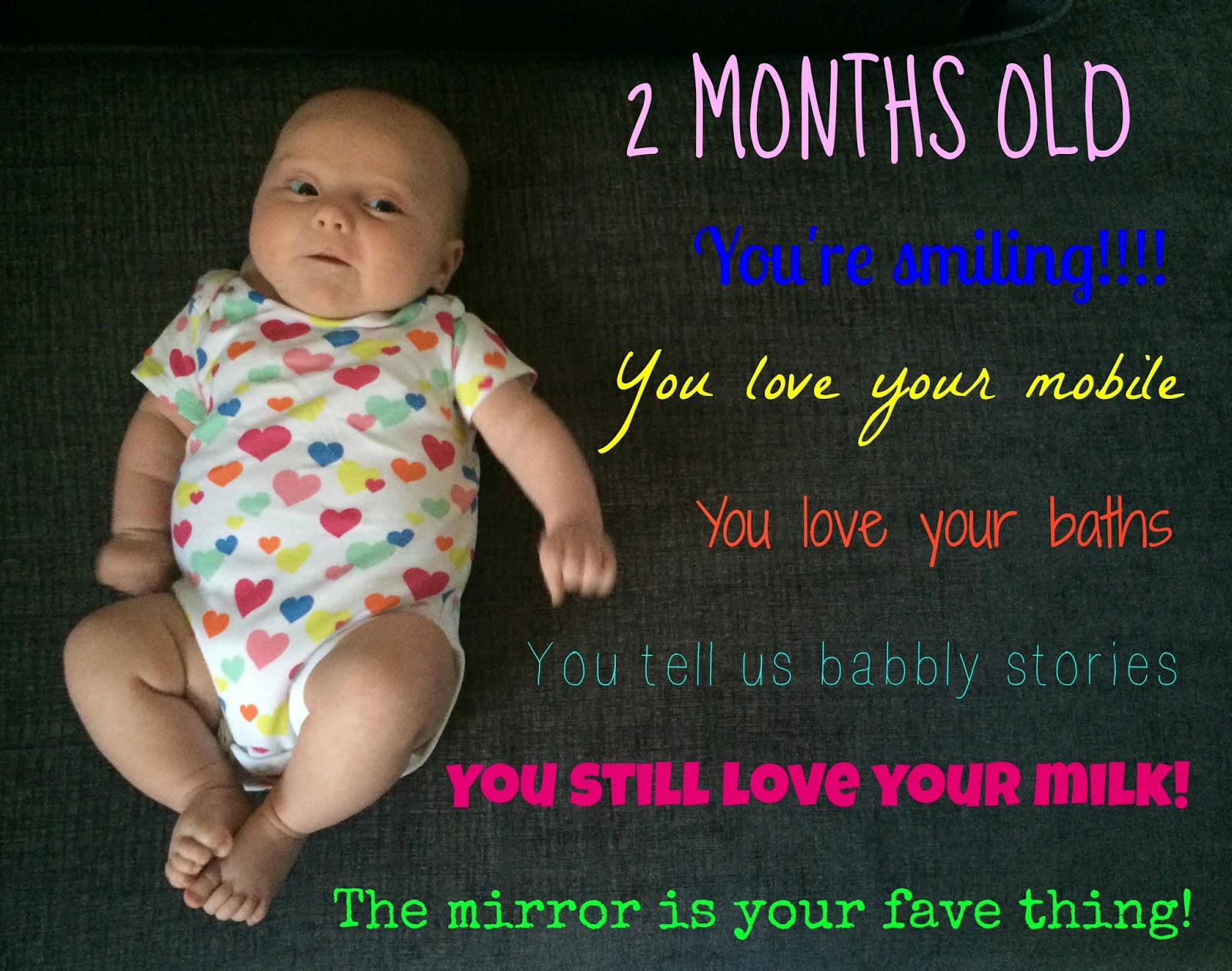 (I’m going to start doing monthly post partum updates from now on and separate mine from Isla’s updates – hopefully this will make them easier to navigate)
General:
These first two months have been a bit all over the place!…
We’ve done lots of travelling together:
– Up to relatives in Derbyshire
– Up to London on a few occasions
– Up to Aberdeen, Scotland
– Exploring our new area on the South Coast
And we’re hoping to go on holiday abroad this summer at some point too.
We’ve also been very lucky with the amount of visitors that have come to us to meet Isla. Thank goodness she’s a pretty social baby who loves the car or we’d have had lots of trouble with her travelling and being passed around like a hot potato! 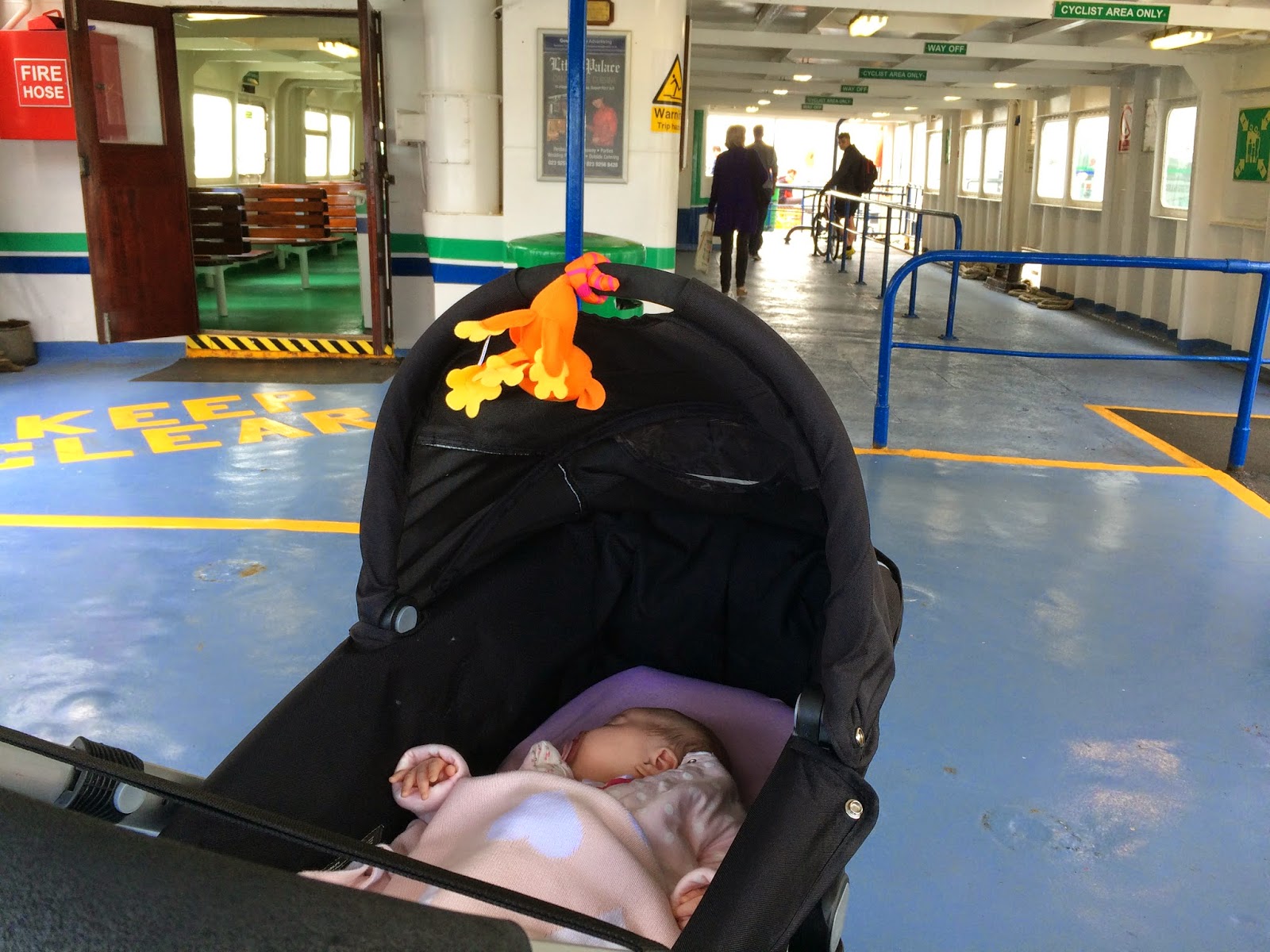 On the ferry over to Portsmouth 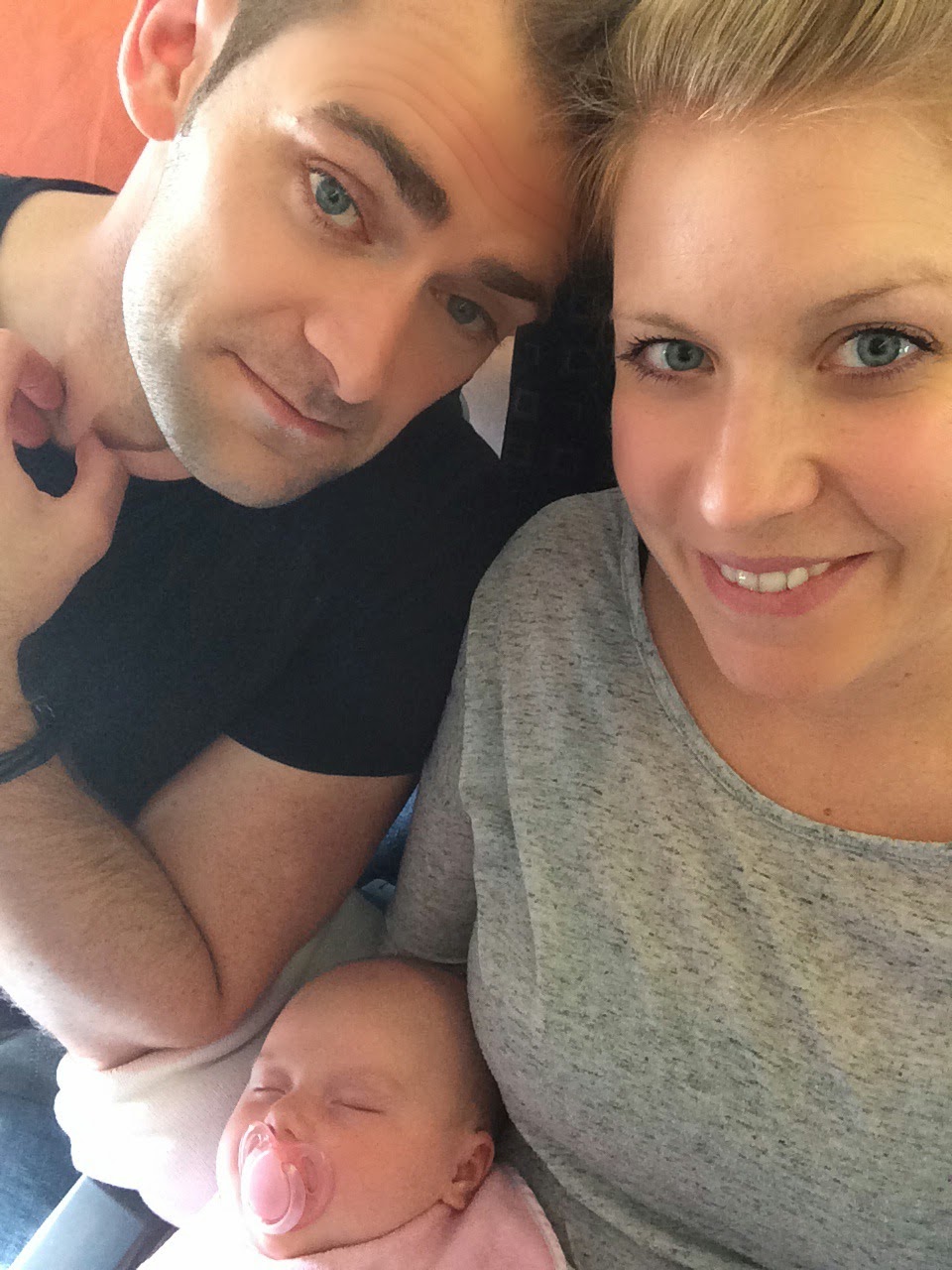 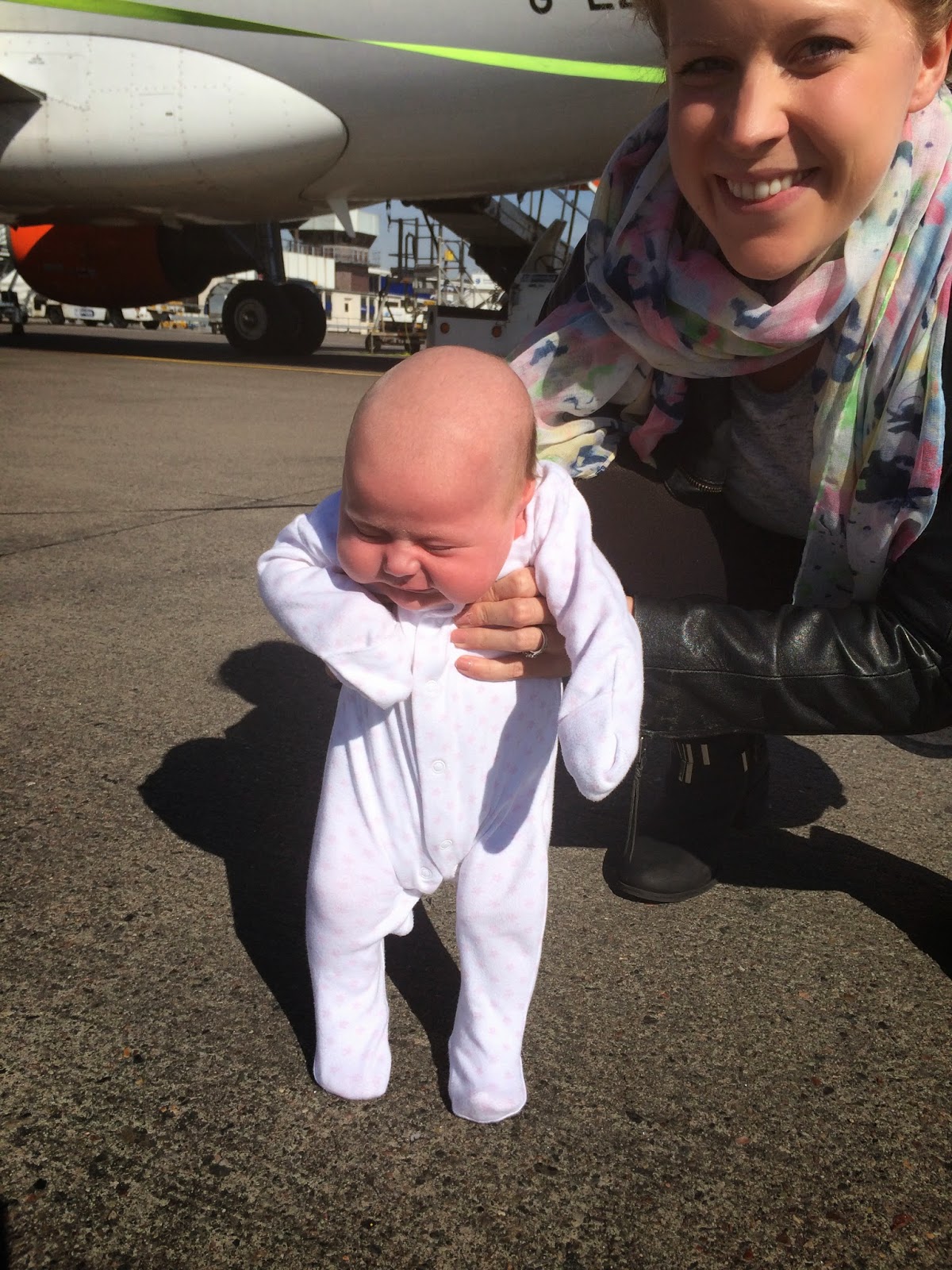 First flight and first trip up to Scotland to meet lots of family and friends.
The weather has been really good here and wherever we’ve visited which has really helped with getting out and about. It spurs you on to just get out there with the pram! Being in a new area as a new mummy is so hard but at least if the weathers good we can try to get out as much as we can and hopefully meet people. 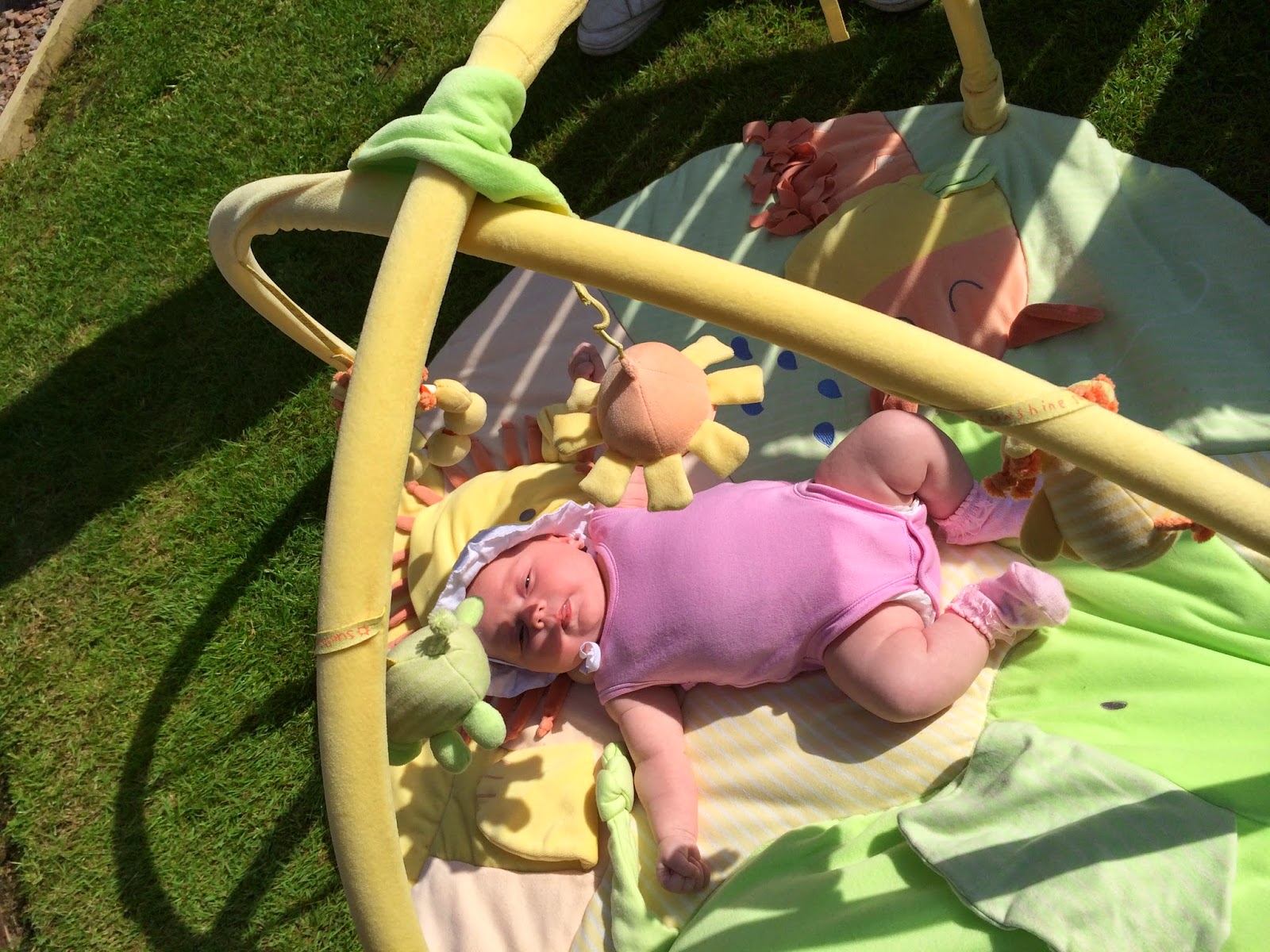 Up in Grannie and Grandad’s garden in Scotland 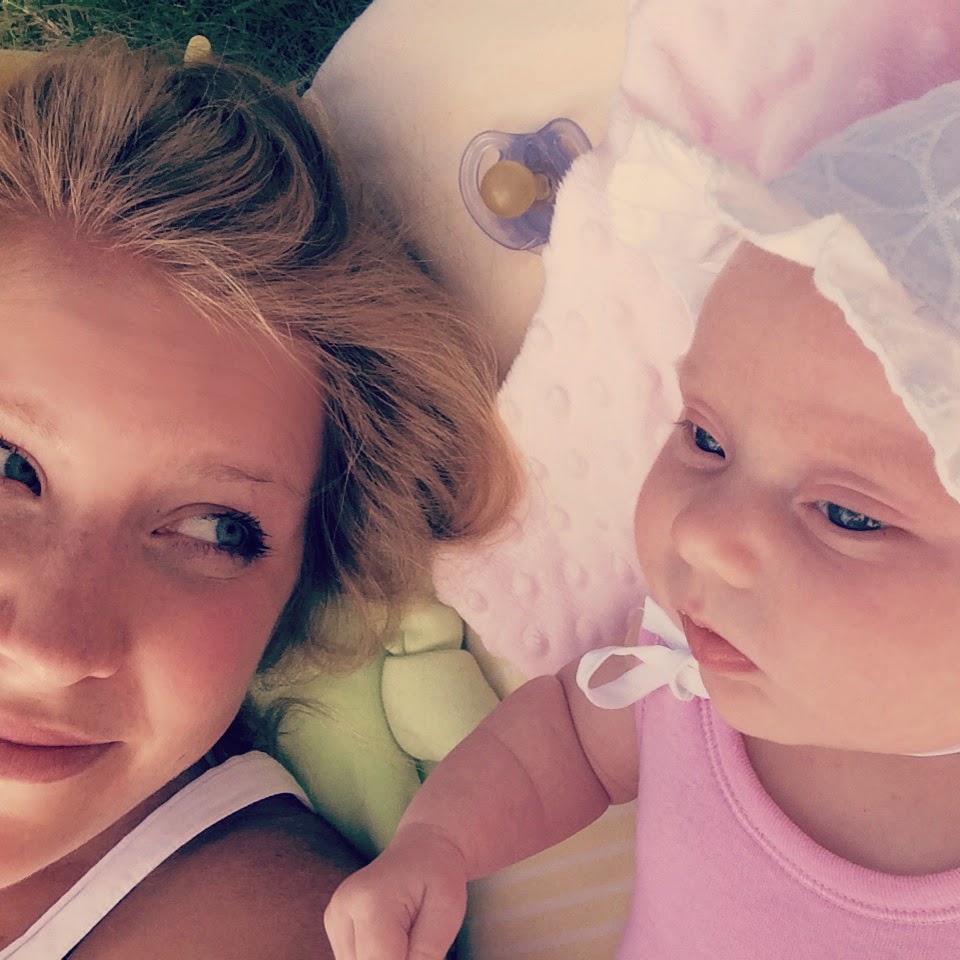 Sunshine Selfie!
Milestones:
Isla seems to be developing well and hitting milestones. We try to get her to do about 15 mins of tummy time a day but sometimes that ends up being on us rather than the floor if she’s in a bad mood! She is really strong and has quite a kick on her now. She can roll from side to side but not all the way over. Her little head bops up and down and she often looks like a meerkat peering over shoulders. 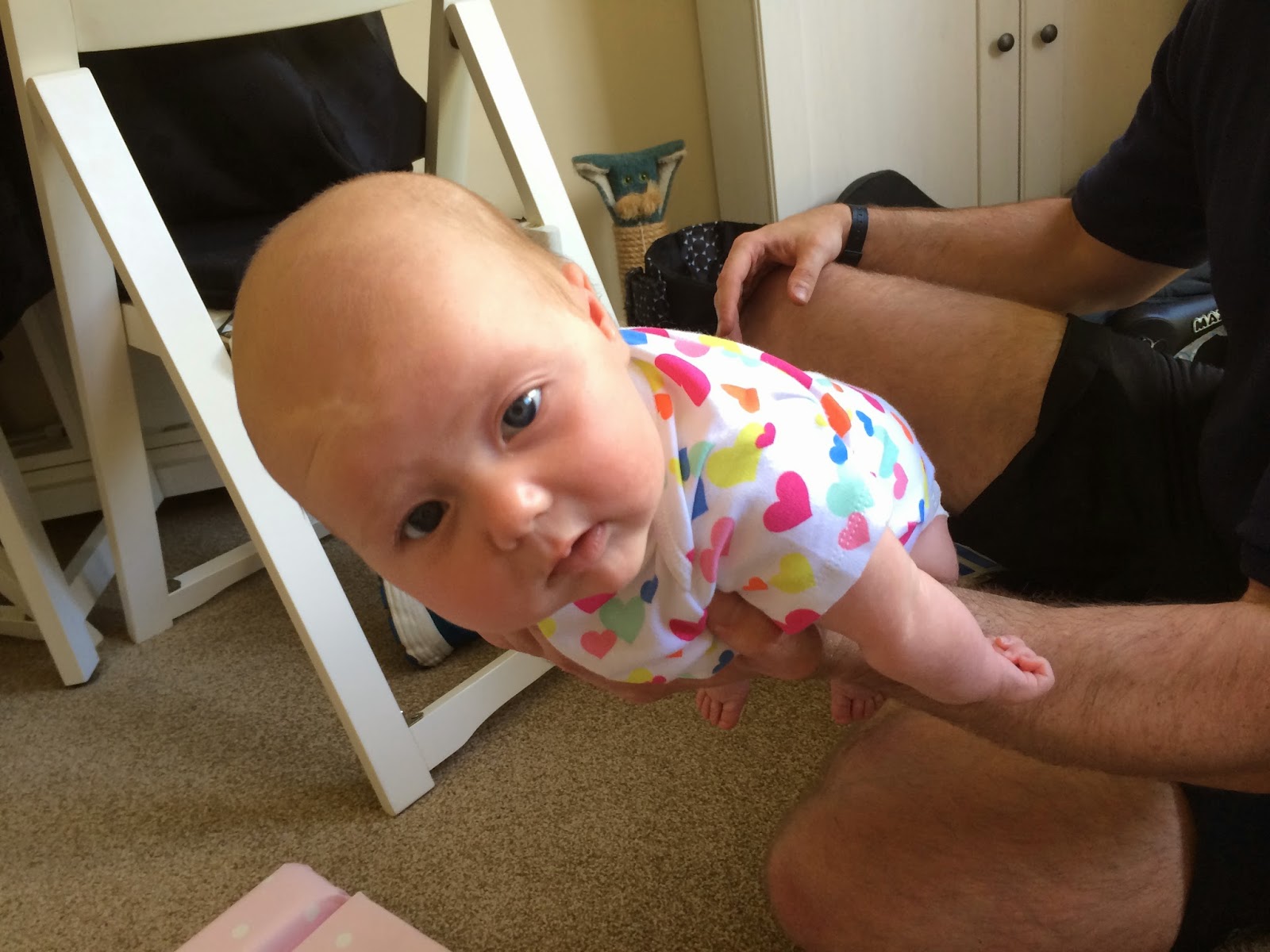 Such a strong head and neck now!
The smiling started off slowly at about 6 weeks but now she loves a smile! She smiles at the most random things – photo frames on the wall, curtains, grass! The cat has also gotten a few smiles here and there so we have high hopes about them being friends in the future. We also seem to know the right voices and noises to use to get her to smile which is lovely. 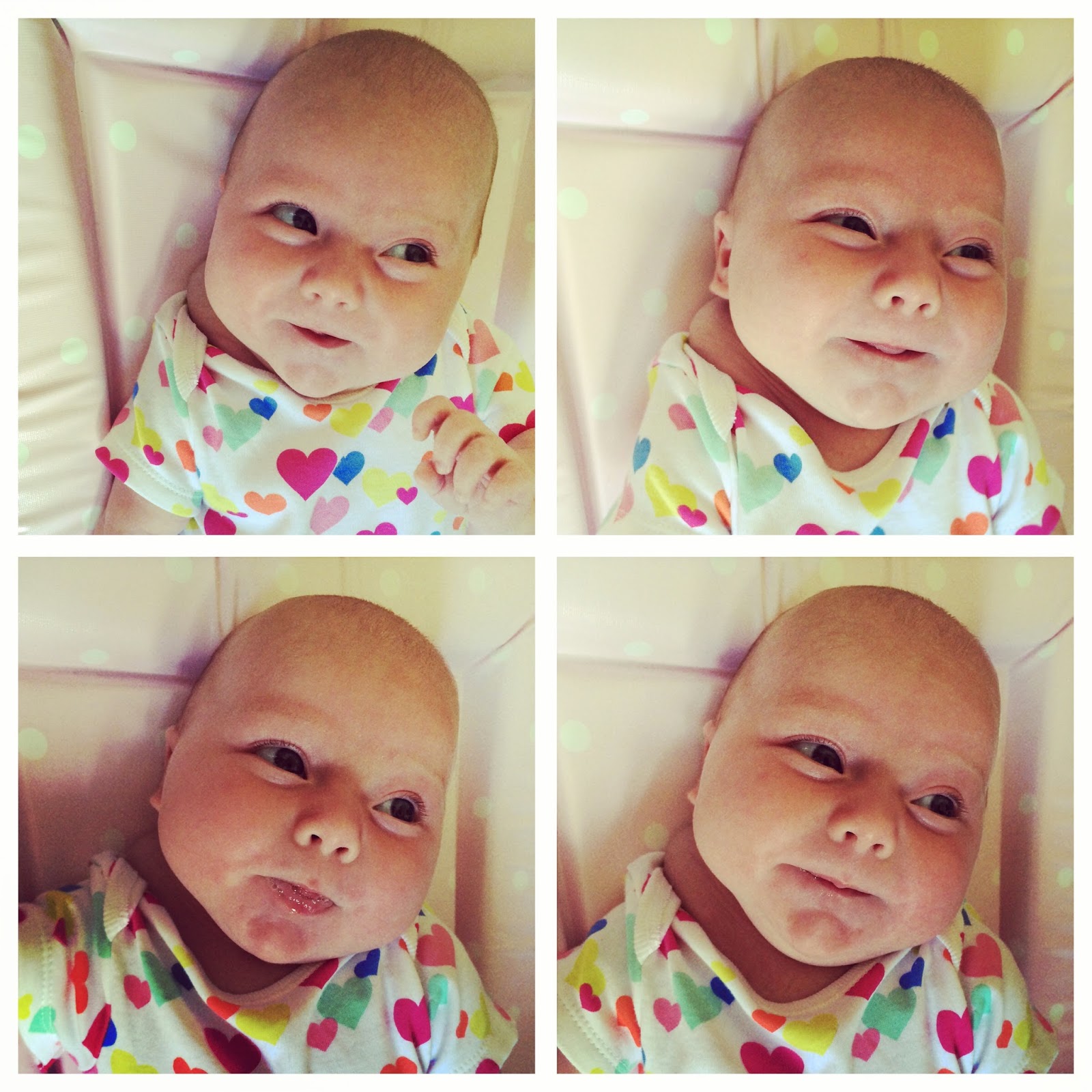 A face full of new expressions!
Routine:
We have started trying to get Isla into a routine as of about 2 weeks ago when she was just over 6 weeks old. I’ll do a separate post on that but at the moment it’s hard to tell if it’s working or not. Some days are good, others not so much. Actually, the days are always pretty good, it’s the nights that are the problem!!
We are having baths every night now which Isla seems to enjoy more and more each time. 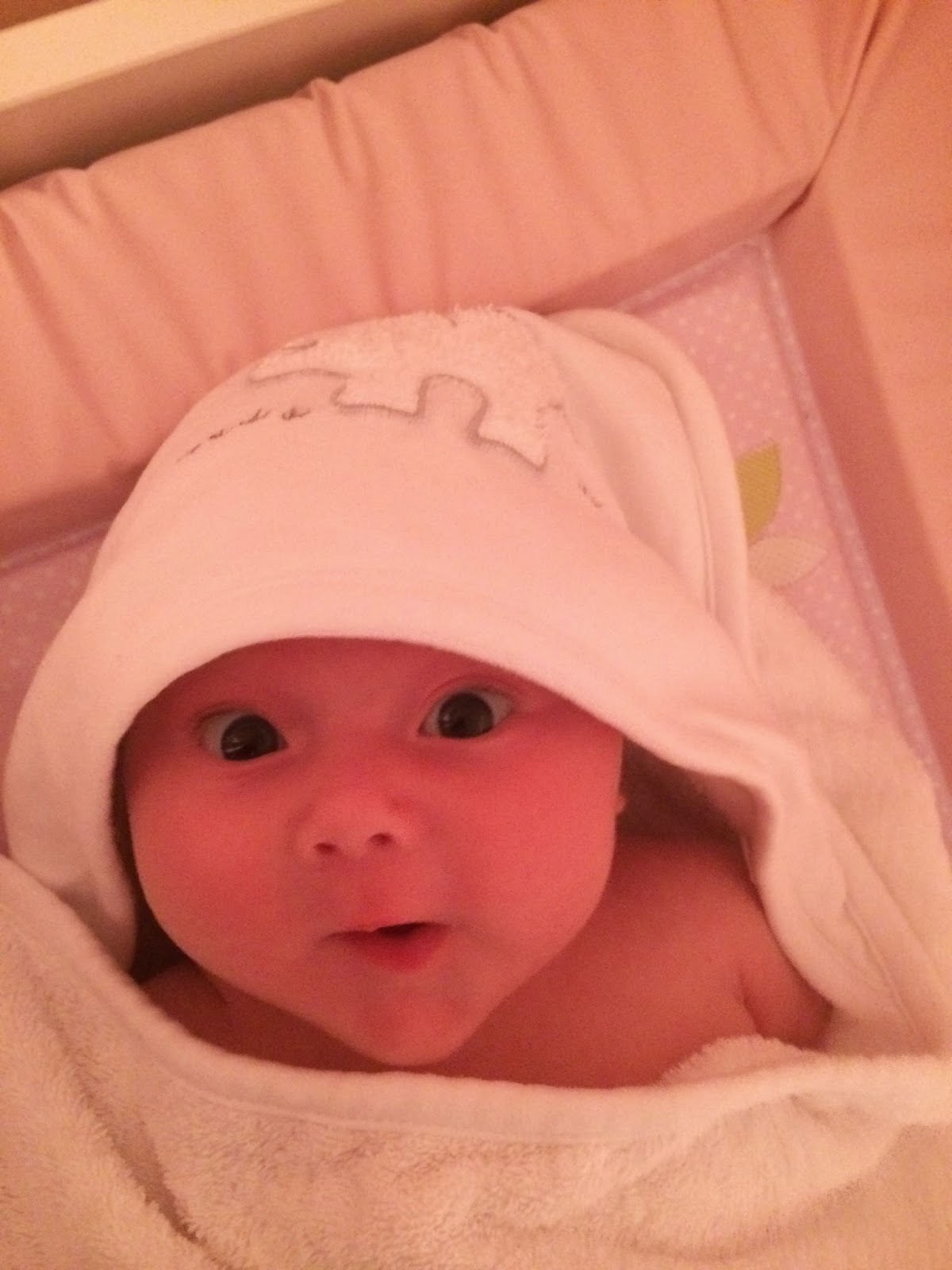 After bath time fun
Weight:
Isla is now 12lbs 14ozs at just over 8 weeks! The health visitor says she’s in the 91st percentile and tracking along the way she should be.
Feeding:
Isla takes 6 or 7 6oz bottles a day usually around these times:
– 4-5am
– 8.30am
– 12pm
– 4pm
– 8pm
– 11pm-1am
She rarely ever leaves anything left in a bottle. Hungry baba!
Clothing:
She’s definitely in her 0-3 month clothes now and some of them are actually too small already! The sizing really confuses me though. Even when they go on weight, it still doesn’t make sense. Some of her ‘first size’ clothes still fit and some 0-3 months don’t?! I’m looking forward to the 3-6 month stage as I have a wardrobe full of clothes I got from work for her! (samples from retail head office)
Well, that’s about it! Looking forward to what the next month brings :)

Why I Couldn’t Be A SAHM