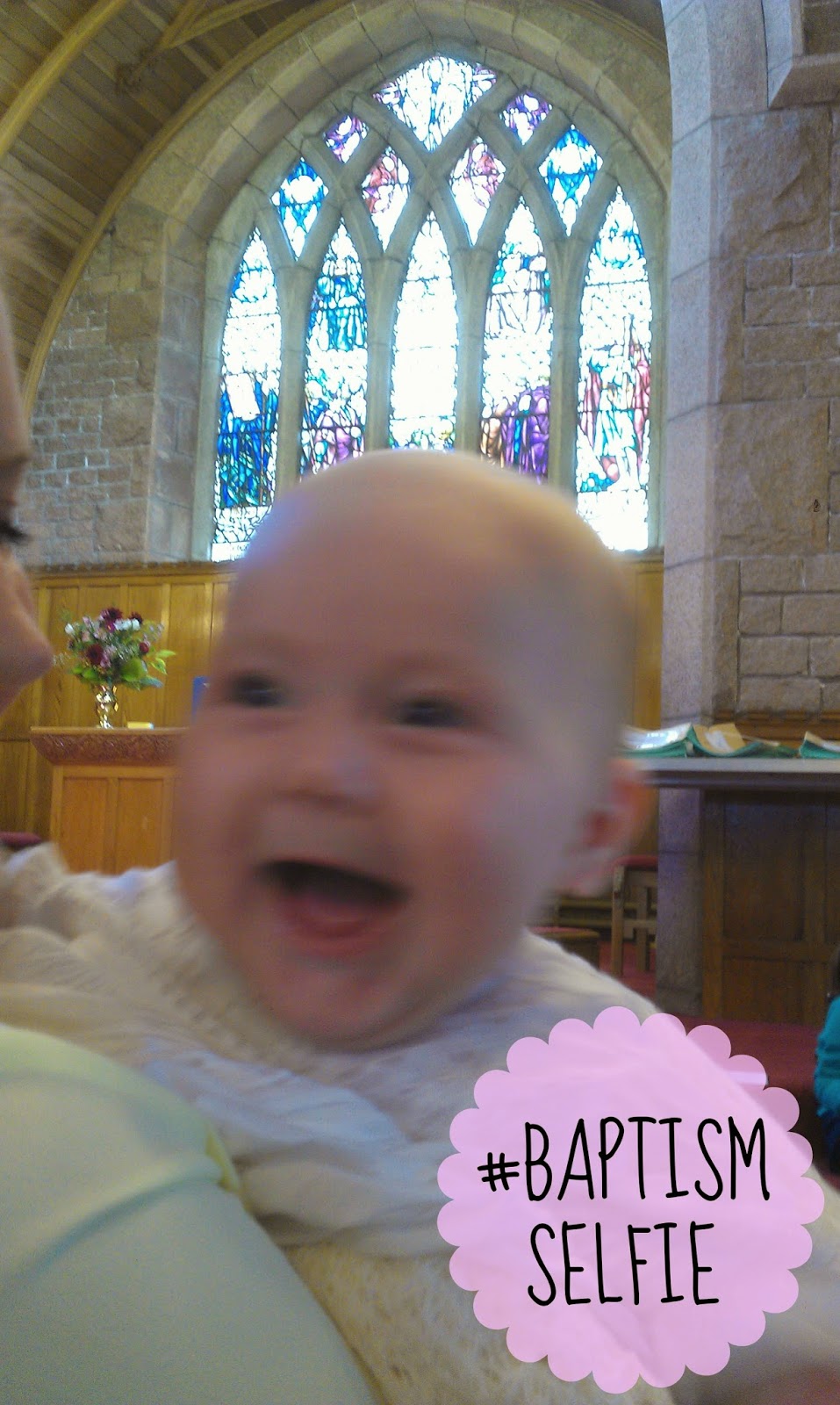 I always knew that we were going to get Isla baptised/christened (I’m going to call it baptised from now on purely because that’s what our minister kept referring to it as). My brothers and I were all baptised as babies and religion has always (albeit rather quietly sometimes!) been present in my life.
I know that blessing and naming ceremonies are really popular these days and it’s lovely that people have the option to celebrate their babies birth in whatever way they desire…
These were the invites we bought (clearly not ours – just an example from the designer!). We got them from Not On The High Street and they were gorgeous. 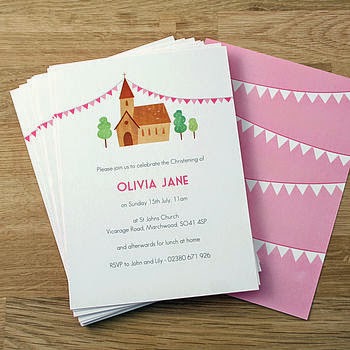 Isla was christened on Sunday the 24th of August at a church in Scotland, where I am from. For the actual service she wore a family christening gown which my brothers and I, my mum and her siblings and my grannie all wore to be baptised in so we estimate it to be about 100 years old! It was so special that she was able to wear it and it was all thanks to my mum having a good old rummage to try and find it in time. 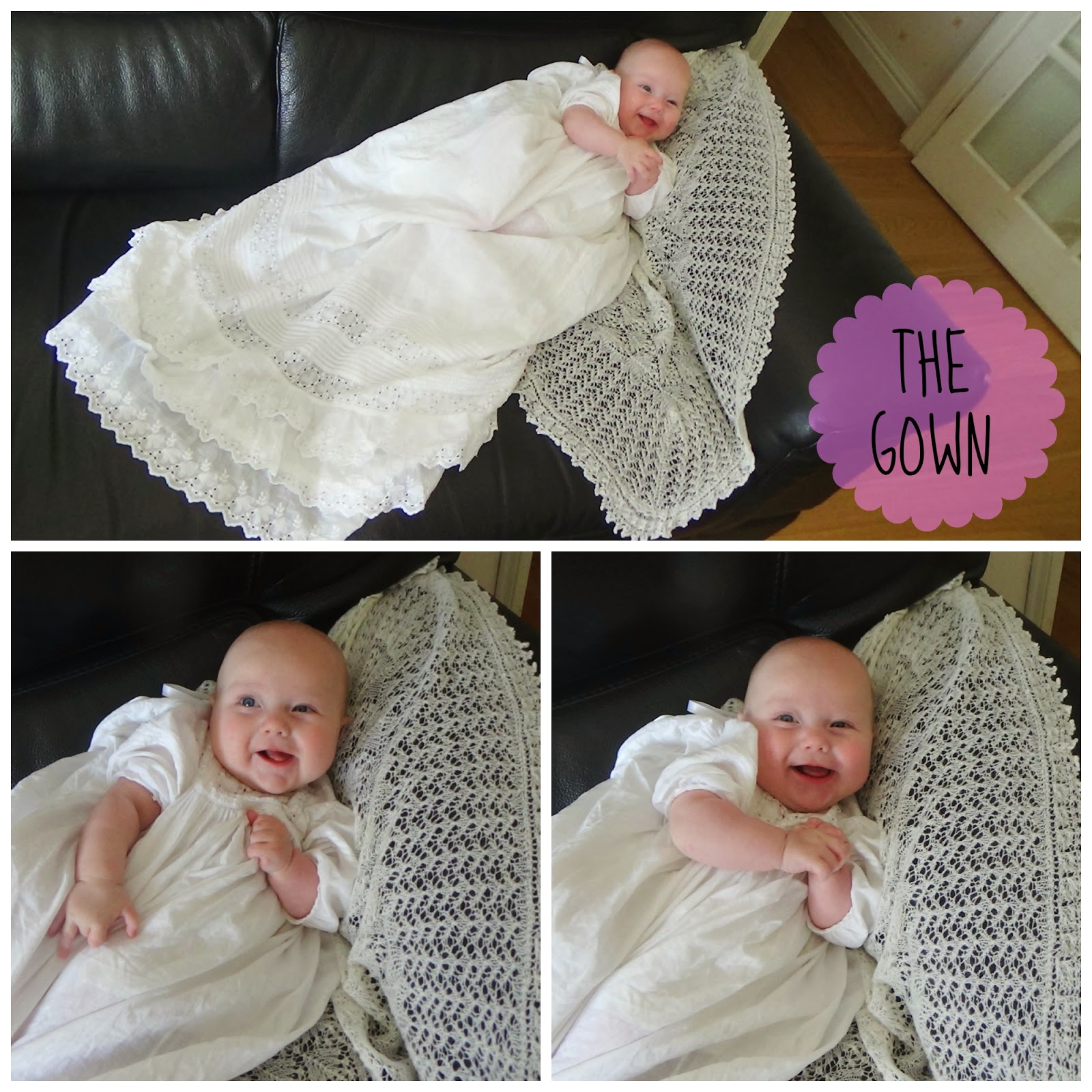 There was another boy being baptised at the same time as Isla and they were both really well behaved. They even had a synchronised nap halfway through the service which was funny. Before we walked through to take our seats at the beginning of the service, we were through in the minister’s office. I got slightly concerned when, whilst the other boy was being silent, Isla felt the need to start babbling really loudly and practically shouting at the poor boy but like I said, I needn’t have worried!
I won’t bore you with the details of the service but we had to take 3 vows to say that we would raise Isla in the Christian faith and she was baptised by the minister up at the font. There were some really nice hymns and readings done as well. We were given a children’s bible and certificate of baptism which was a lovely touch.
The rest of the service was based around the independence referendum that is happening in Scotland this month and was really interesting and relevant. We laughed though because we were trying to keep the day ‘referendum-free’. We had a pretty even split of yes and no’s attending and wanted to avoid a heated debate! 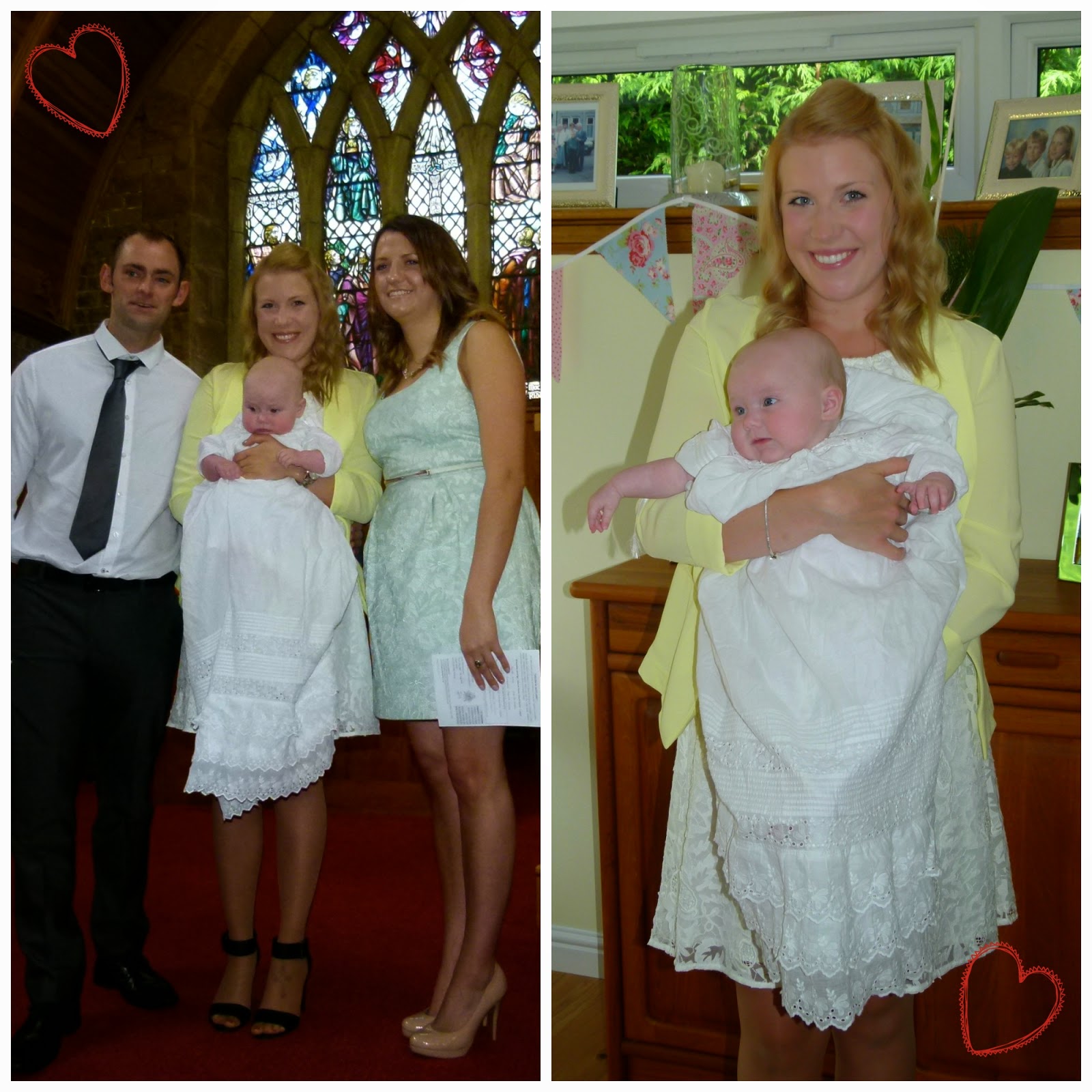 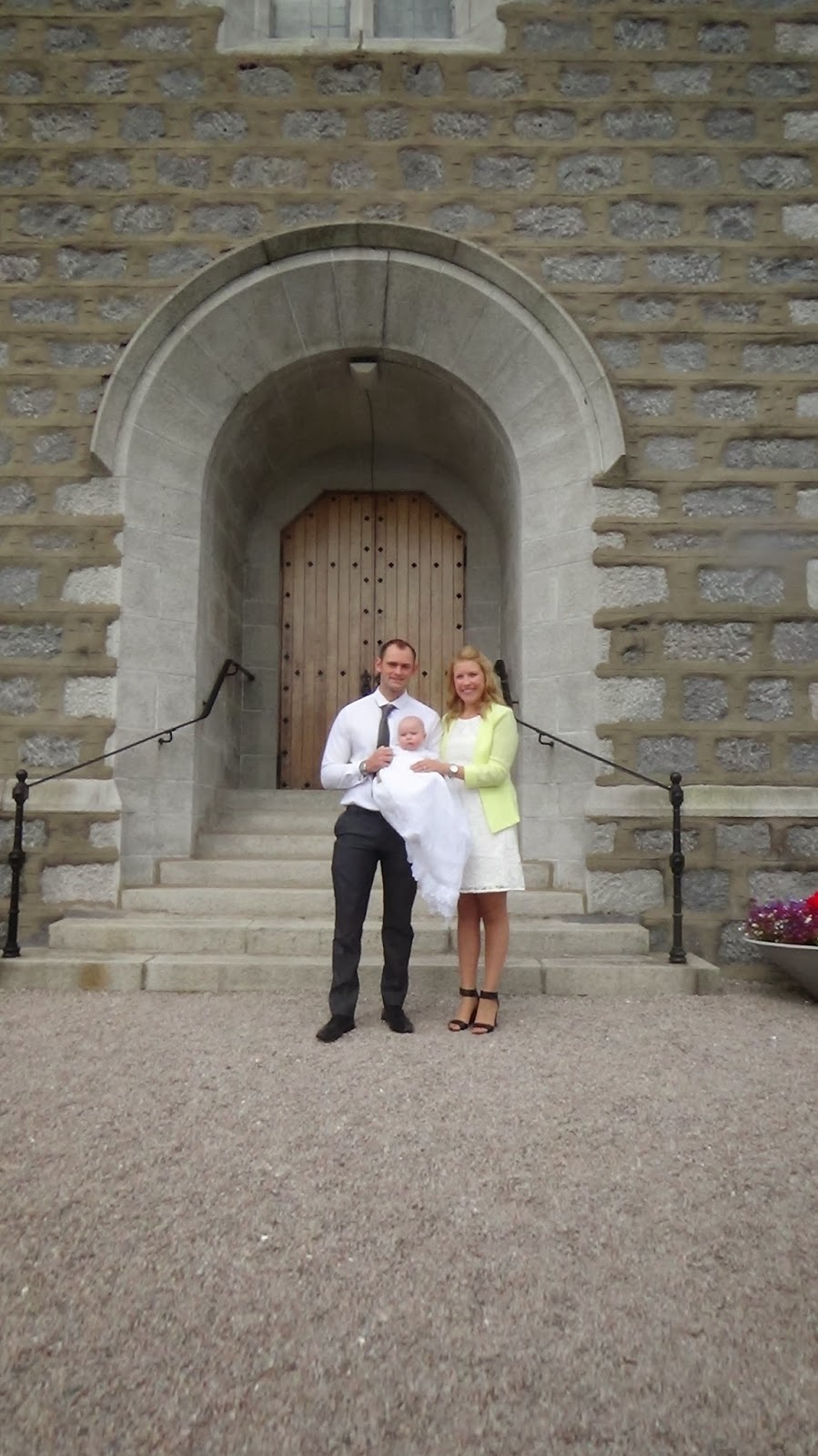 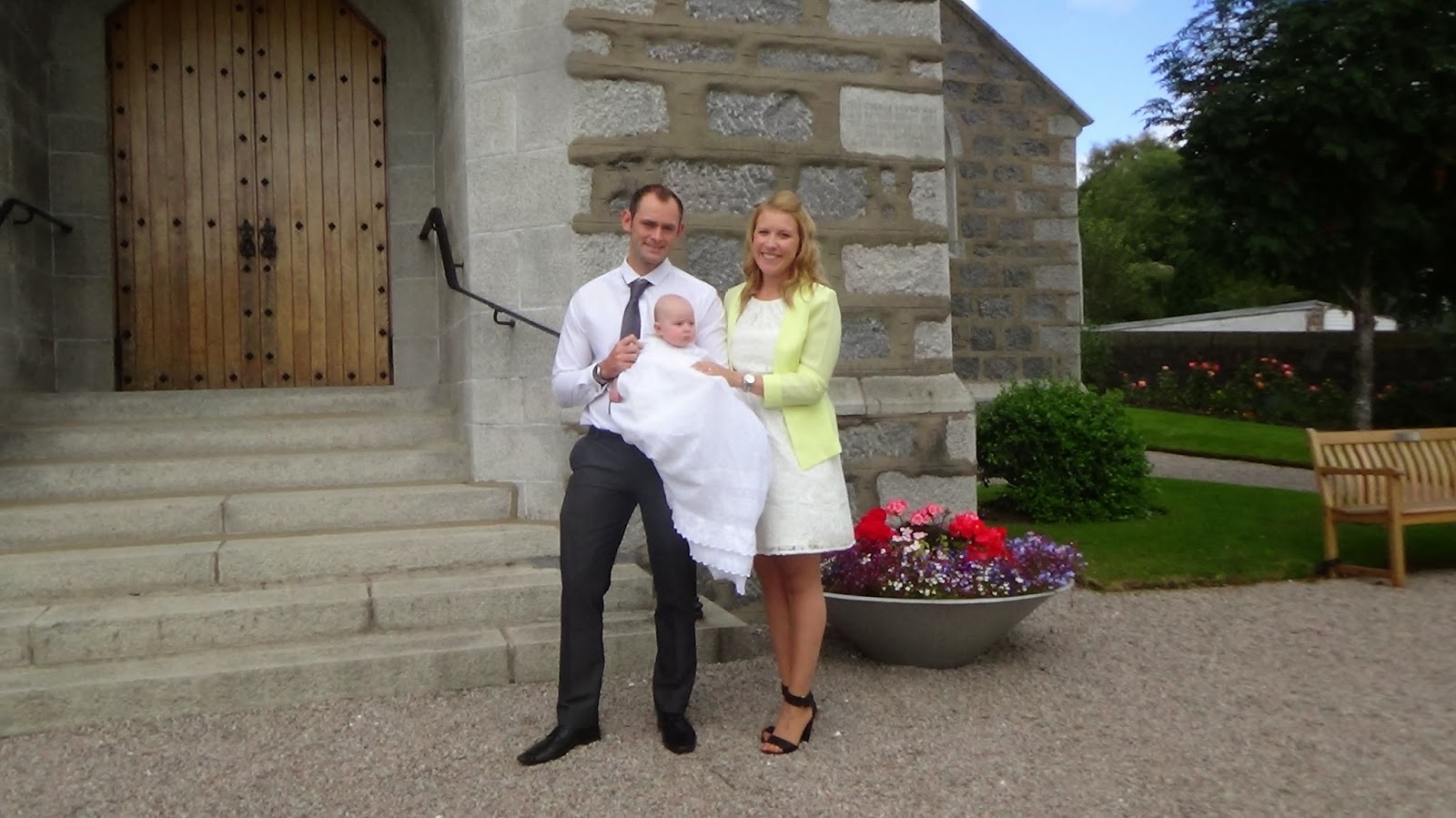 We decided to throw a little party back at my parent’s house afterwards to continue the celebrations. Luckily the weather held up ok (for the the North East of Scotland!) and we managed to get outside for a bit. Isla changed into a cheeky Cream coloured Primark number because the gown was a bit too much to be in all day. 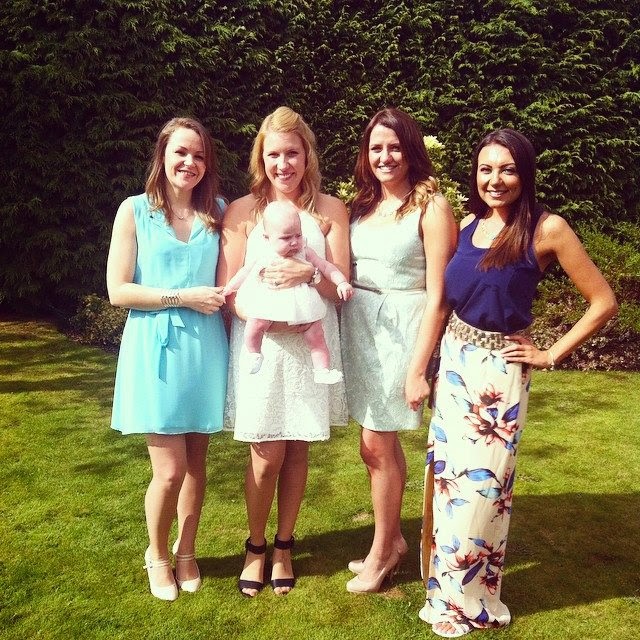 I decorated the house with pom poms and bunting that I purchased from eBay – bargains! The bunting is so nice that I’m taking it back and putting it in the nursery. My mum also bought some Pink and White balloons with some ribbon which added to the decor. I bought what I thought was a lovely candy stripe table cloth, for the table where the food was going, but it turned up looking like a piece of wrapping paper – disaster! 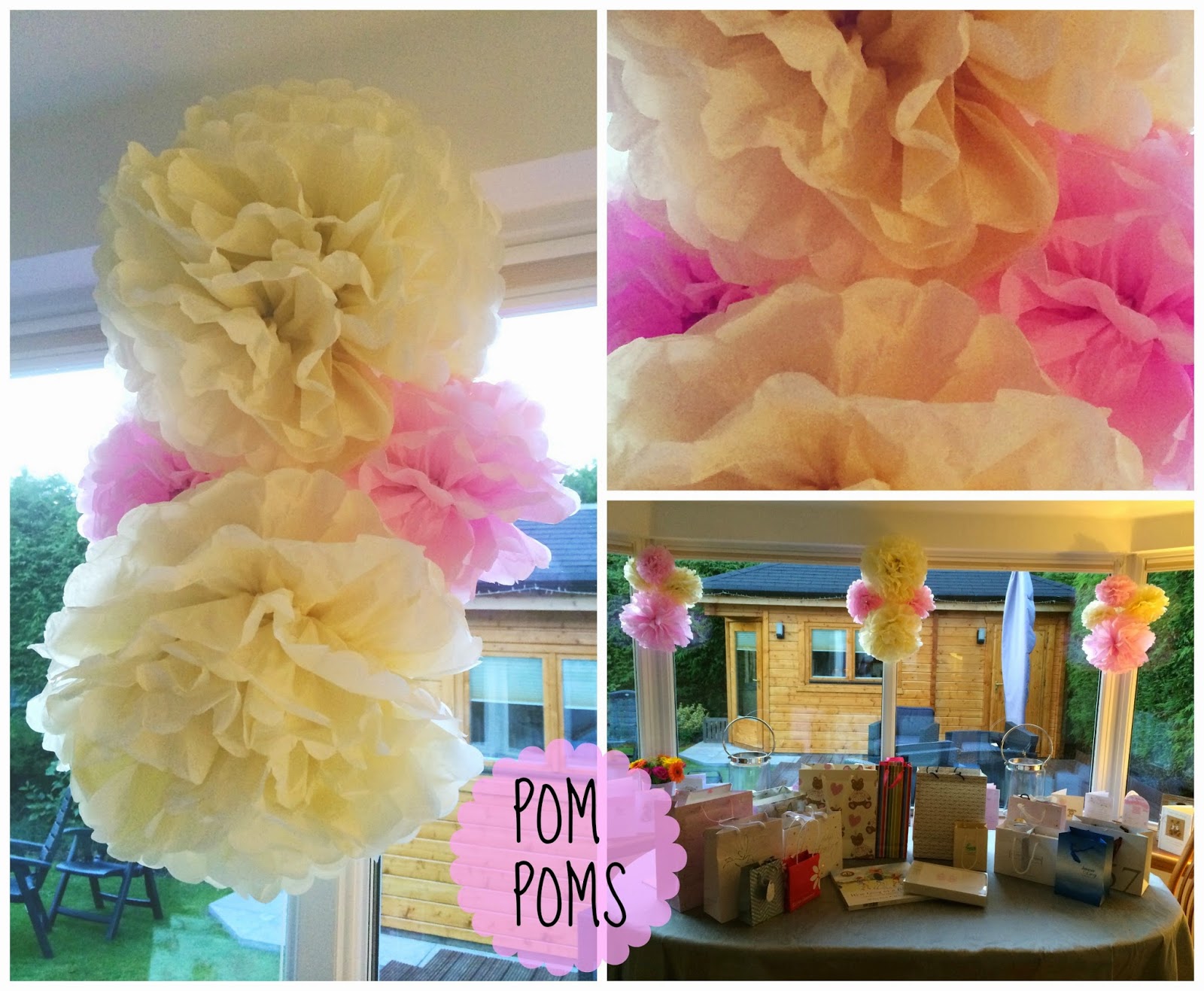 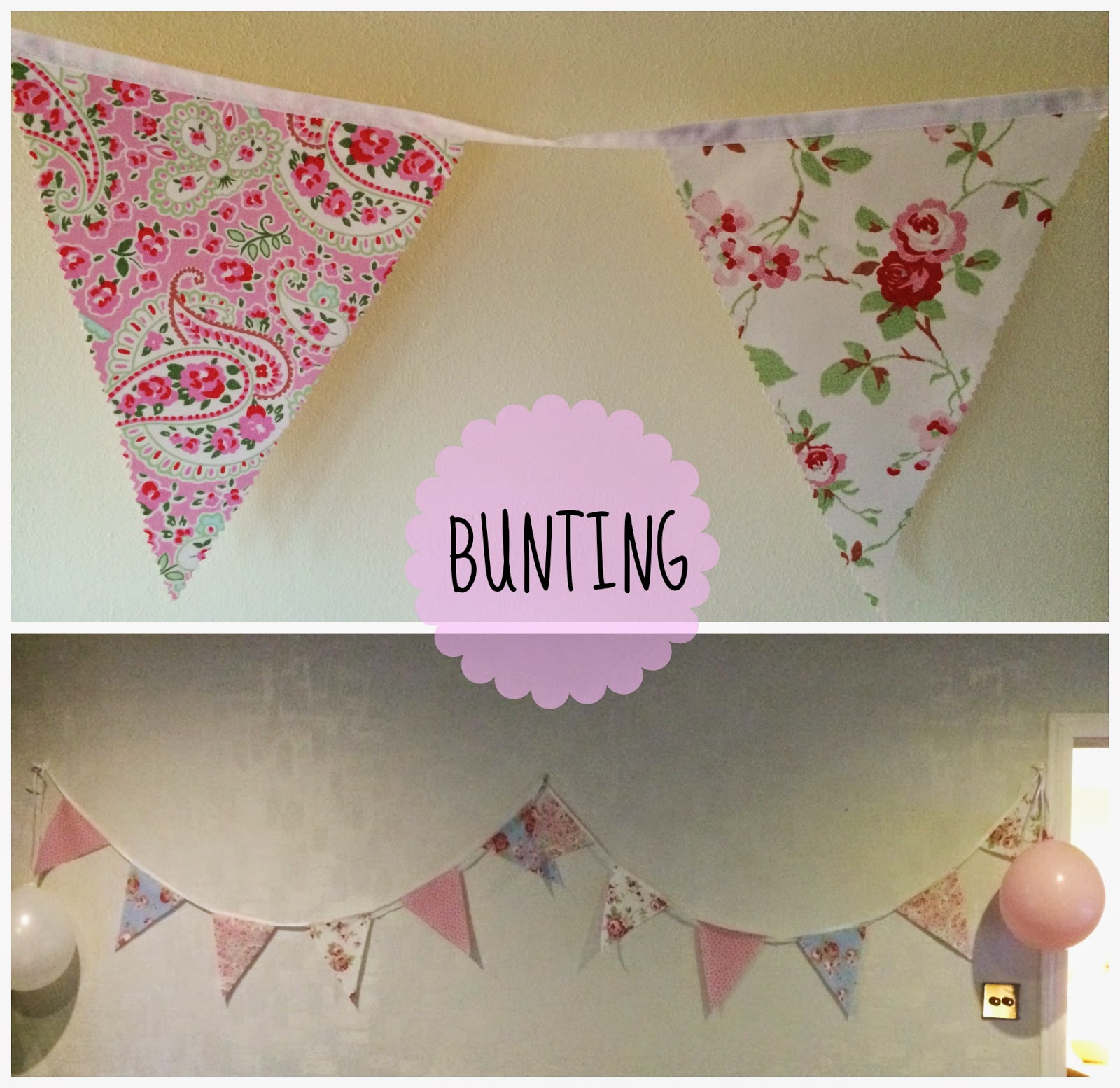 We were sent some gorgeous flowers from my auntie and uncle who couldn’t make it and my mum created the bad boy flower cake design on the right – talented lady that she is! 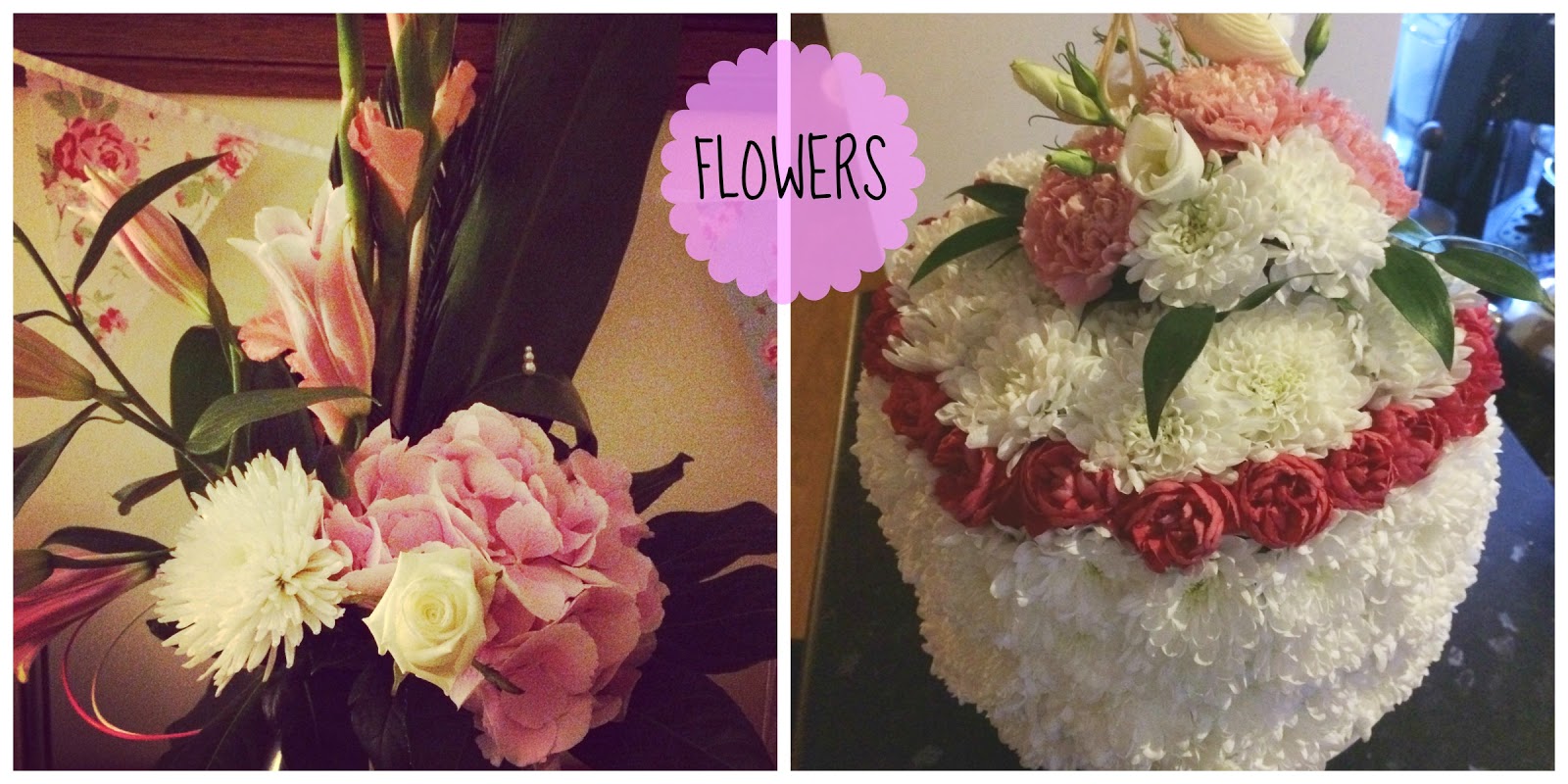 Onto the food! Unfortunately there are no photos because…well we are a bunch of fatties and it all vanished before I had a chance to take any photos! We had used Costco’s catering facilities before, when we had thrown a party the night before our wedding, and we were so impressed with the standard of food we decided to use them again. Platters were about £16 each and we had 2x Sandwiches, 2x Wraps. 1x Antipasti Meat Platter and 2x Dessert platters. We also topped up the food offering with the classic party faves, sausage rolls, mini quiches etc.
The cake was made by a friend who also made our wedding cake. She runs a fab cake making business called Truly Scrumptious Cakes by Joanna so if you live in the North East of Scotland, buy your cakes from her now. You won’t regret it!! We chose a chocolate sponge with white chocolate buttercream for the top tier and a victoria sponge with jam for the bottom tier. It was absolutely delicious and vanished as fast as the food – although I managed to take some photos this time! 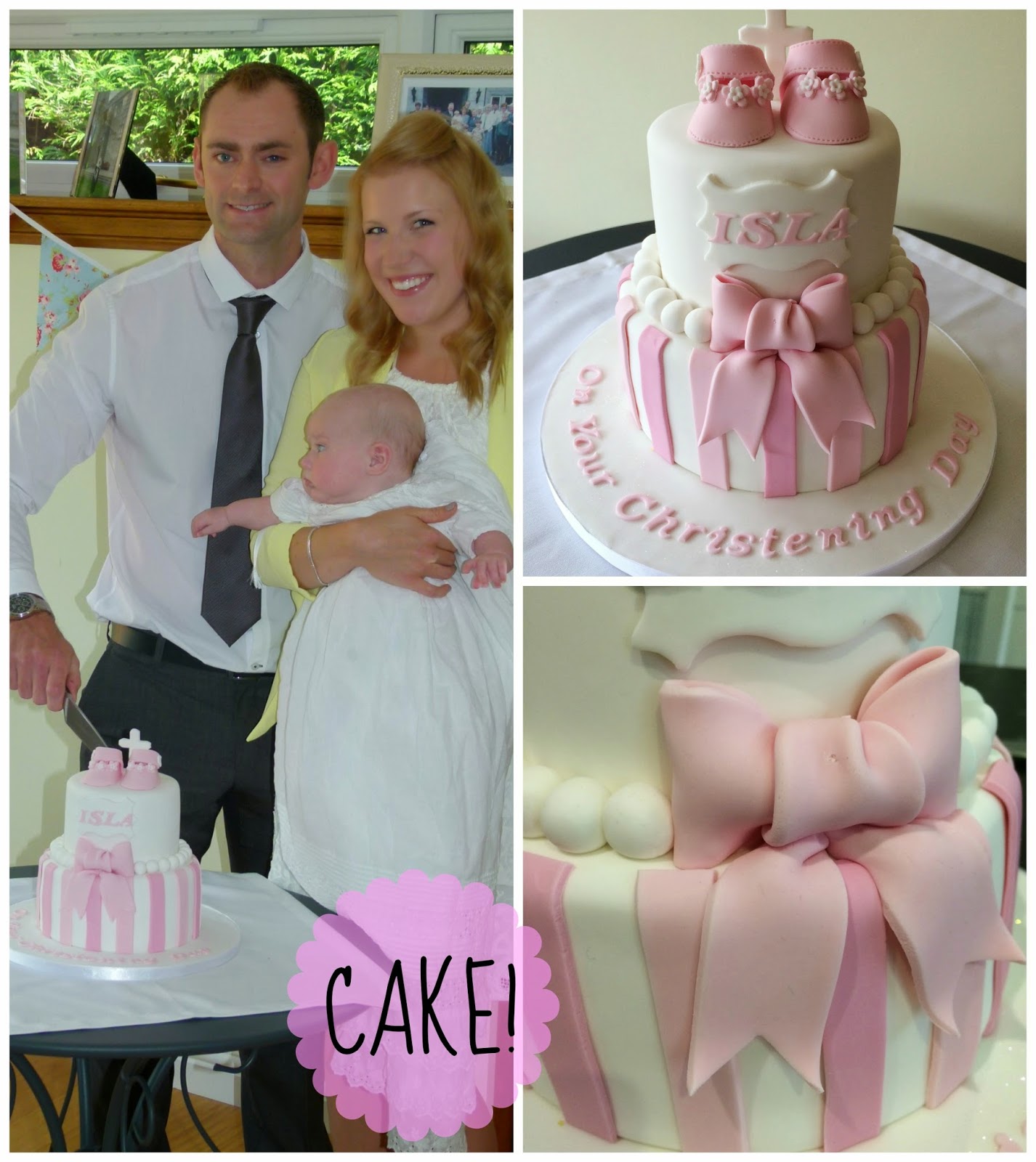 All in all it was such a special day and Isla was completely spoiled by everyone who came with love, cuddles and gifts! She’s a lucky little girly. My dad counted 14 bottles of prosecco plus numerous other alcoholic recycling materials when he was putting the bin out the next day – a sign of a good party!
Did you get your little ones baptised? Did you have a blessing or naming ceremony? Or did you just throw a party to celebrate their arrival into the world?
SHARE:

10 Things I Have Learnt in the 1st Year of Parenting

Great Activities To Try Out On Your Next Playdate*