Co-sleeping is a bit of a hot topic in the world of parenting. It’s probably been debated between parents since time began but with so much information available through the internet these days, it seems to get debated over and over again at the moment – it’s hard to escape it. 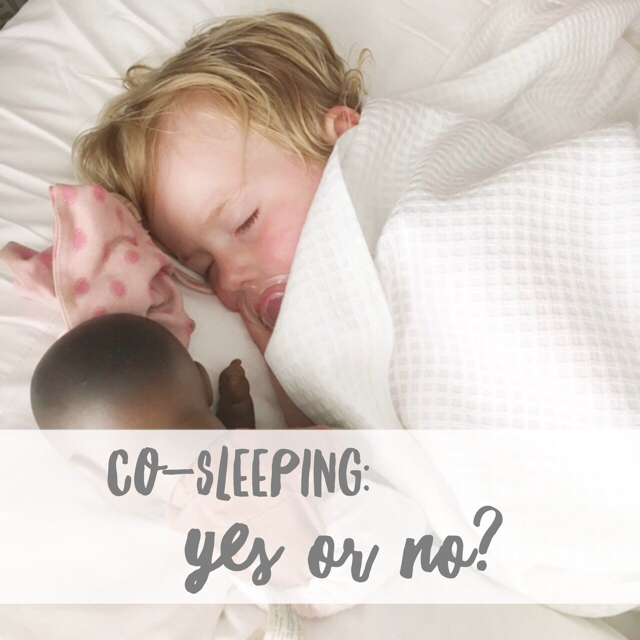 The best definition I could find of co-sleeping is:

You are actively discouraged from co-sleeping by the NHS midwives and health visitors – well you are in my area anyway. I remember having all sorts of facts about SIDS etc thrown at me in the early days of parenthood and it, obviously scared the life out of me.

I was so paranoid about falling asleep with Little I on me and was convinced I’d crush her at the slightest nod of the head during the MAJOR sleep deprivation days. It’s ridiculous looking back on it but it really is drilled into you from the beginning how dangerous it can be.

We invested in a bed side crib for the first six months and absolutely loved it. It gave you the closeness of co-sleeping without as many of the risks. Little I was more than happy in it and would often coo away in the morning, because she was able to see me.

I did have to take her into bed during the 4 weeks of colic hell we had when she was around 12 weeks old. We don’t like to talk about that time in our house! It was utterly horrendous. She was like a different baby. A possessed demon baby, bless her. It was lovely to get those snuggles but I barely got a wink of sleep. Our bed is only a double at the moment so having a husband, who does strongman training and is 6ft, a cat and a wriggly baby in it, there wasn’t much room left for me to get comfy.

Once she got a little bit older and I was still on maternity leave I did try to take naps with Little I, but she wasn’t interested and thought it was really funny to take it as a time to play ‘let’s touch every part of mama’s face and see how many times we need to hit her in the face until she stops pretending to be asleep’. She was on the move pretty young (crawling at 5.5 months and walking at 10 months) so she’s always been a fidget. Not a good trait if you want to snuggle down and have a nice sleep together.

Little I has also always been a bit of a snorer – or a heavy breather at best. Sometimes you can even hear her through her nursery door. So again, not the best attribute to have as a sleeping partner.

On a purely personal note, I do view our bedroom as belonging to my husband and I, not Little I. So, in that sense, I suppose I probably would have never fully got on with co-sleeping particularly well. It’s nice to have that time to come up to bed together as a couple and chat, which I’d imagine wouldn’t happen if there was a toddler lying star fished in the middle. Little I rules the roost in every other room in the house, so it’s nice to have our space.

It’s probably important to note that we have been in a pretty strict bedtime routine with Little I since around the age of 12 weeks and since we got over the colic, bar a couple sleep regressions, she has always been a good sleeper and enjoys being in her cot. The fact that we haven’t needed to co-sleep might contribute to why we haven’t done it as well.

I’m not for or against co-sleeping. I’m completely neutral when it comes to sharing a bed with your child. It just doesn’t work for us and that’s fine. Every child is different and their needs differ as well.

Do you co-sleep? What’s you opinions on it?

Why Play Dates Are So Important*

Great Activities To Try Out On Your Next Playdate*