How to spot a faker 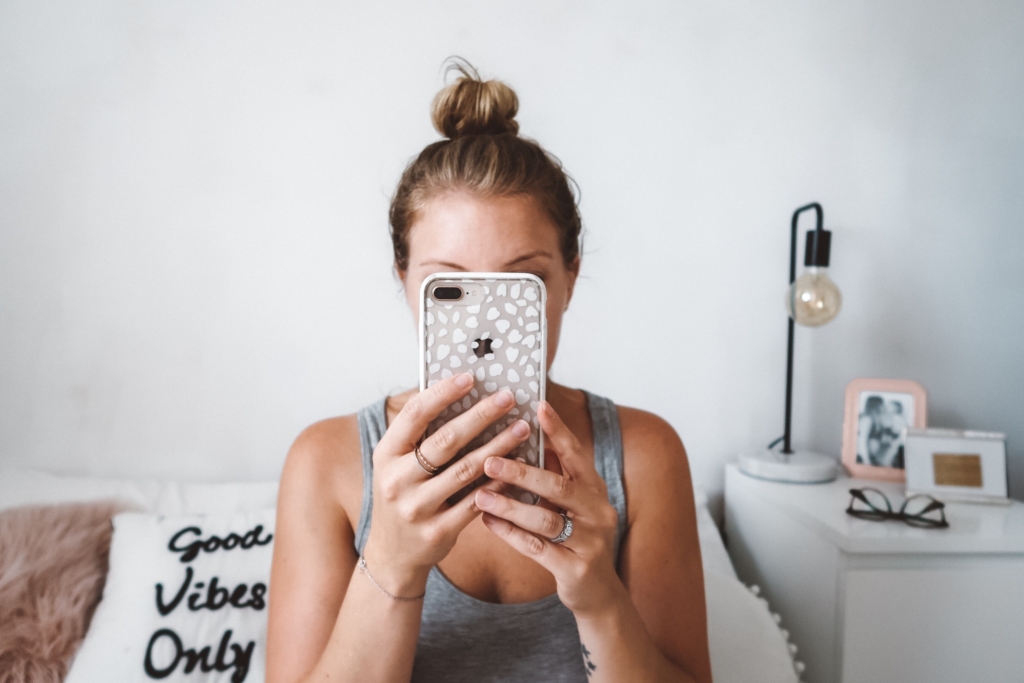 This could possibly be taken as somewhat of a controversial post but I am so unbelievably sick of everything that’s going on over on Instagram that I have to say something. I’ve broached the subject a few times on my stories and the response is always quite incredible. So many DMs! There seems to be a 50/50 split between people who don’t know it goes on and those who do know and find it just as frustrating and unfair as me.

I often get asked how you can spot someone who’s ‘faking it’ or at the very least ‘heavily artificially enhancing’ their stats, so here we go! It’s not an exact science. It’s just what I’ve picked up over the past couple months, so please don’t take it as gospel, but hopefully if you’ve got your doubts about someone, it might help clear it up one way or another.

I’d also like to point out I didn’t go out of my way to figure this all out. Basically, I was on a couple campaigns with a particular influencer (don’t like that word at all but I’ll have to use it, sorry!) and couldn’t get my head around their stats in comparison to mine. One of the brands we worked with sent me through their post’s insights, to show me what to send over, and their reach and impressions compared to their likes and followers made no sense whatsoever. They had slightly more likes than my post, but a fraction of the interaction in terms of reach and impressions. I looked into their account a little and suddenly found myself finding out all sorts of things about ‘engagement threads’, ‘pods’ and ‘like for like’ groups.

So, the way I see it, there’s two types of ‘faking it’ when it comes to Instagram. And what I’m mainly talking about is when someone moves from enhancing their stats for their own ego (their prerogative I guess) to then landing brand deals off the back of it and enhancing those as well…

One is the full blown buying of likes and followers which, I hope most people would agree with me here, is just plain wrong. If you have to buy fake likes and followers then surely you have to question what you’re doing on the platform at all. I believe there are numerous sites you can go and buy these from and they’re mainly based out with the UK. You select your level of service, pay whoever it is and they deliver your fake likes and followers to your account. Apparently it has gotten even sneakier in the sense that as brands get more wise to analytics etc and ask for demographics of followers, people are now buying likes and followers from specific countries. They can also ‘stagger’ the likes to make it look more ‘organic’. So bad!

The way you can easily spot fake likes and followers is by going to the likes on a photo, or the followers on an account, and having a look at the accounts. They will usually be odd looking accounts with some (or all) of the following characteristics: 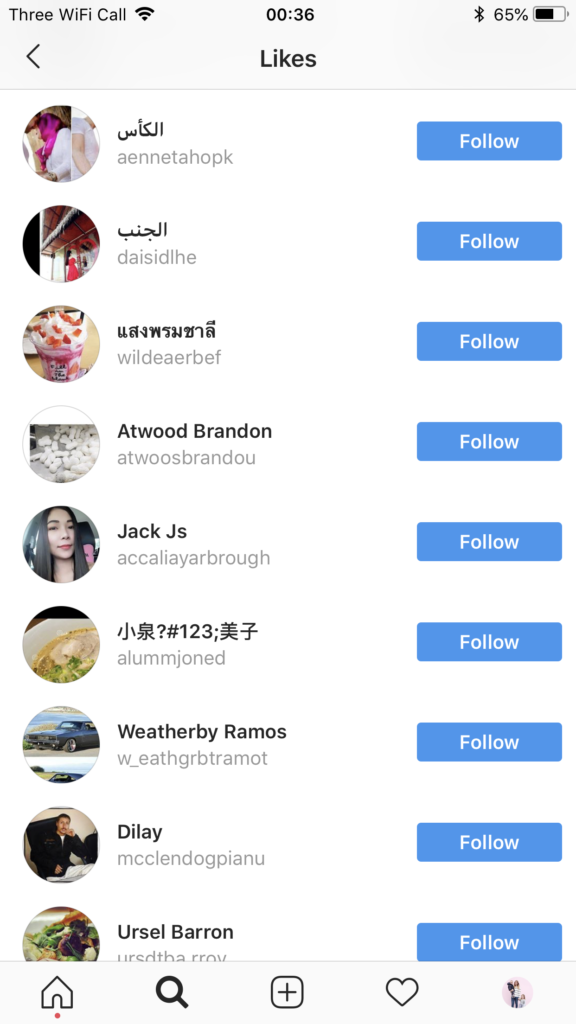 (Likes on a UK ‘influencers’ photo. They get 500-510 of these kind of likes on every photo now, with no comments and accounts that don’t follow them/look super dodgy? And after getting 10-50 likes before. Hmmm…).

Another way to spot it is that the likes are roughly the same on each photo because they’ve obviously bought a package. Organic likes have a form of momentum i.e. they start off fast, but gradual. For example my photos tend to get about 100 in the first 15 minutes, then up to 300-500 in the first hour and then maybe up to 800-1000 within 24 hours if I’m lucky. An account that goes from 0 likes to 500 in under 5 minutes, when they only usually get under 50 likes is clearly buying likes.

The comments can be a giveaway too. If a photo has 500+ likes and no comments, that’s a bit strange. Especially at our level where we still have the capacity to engage with our audiences. I say this because some account with 1 million followers might not have a proportional amount of comments on their photos because people know they won’t get a response.

Have a look back through their old photos. Spot when they went from getting 20 likes to 500+ and you’ll be able to pinpoint when they started buying likes. Even if someone suddenly gained lots of genuine followers overnight, the way the algorithm works means that new followers would see their old photos and like them so they should go up too…

Now onto the harder to spot type. I was pretty oblivious to it all until recently. I had heard of ‘pods’ where a group of people are added to a message group, whether that’s on Instagram DMs, Facebook messenger, Whatsapp etc, and then they message when they post a photo and everyone in the group has to go like it and/or comment etc. The idea is that it boosts the post at the beginning and gets it seen by a wider audience because it’s thought that Instagram favours lots of interaction at the beginning of a post’s life cycle. Someone added me to one a few years back and I couldn’t for the life of me figure it out! Everyone got so intense about people liking their photos and whether they did it fast enough, that I had to laugh and leave the group. I barely have enough time in the day to go to the toilet, never mind liking someone’s photos within 3 seconds of them putting it up.

What I hadn’t heard of was the specific Facebook groups that had been set up to ‘beat the algorithm’. These are groups, from what I hear, where there are threads that people put links to their posts in and then they get hundreds of likes in return for liking everyone else’s posts. I won’t name the groups I’ve found but there’s all sorts going on, and it’s hard to know where to draw the line with it all. Surely it just gives people a false sense of confidence? The accounts that are liking their photos are only liking them because they have to? It’s not real. It doesn’t equate to sales on branded posts. And it’s definitely not real engagement.

These are harder to spot and ways to spot these are similar to the above but can also have these characteristics: 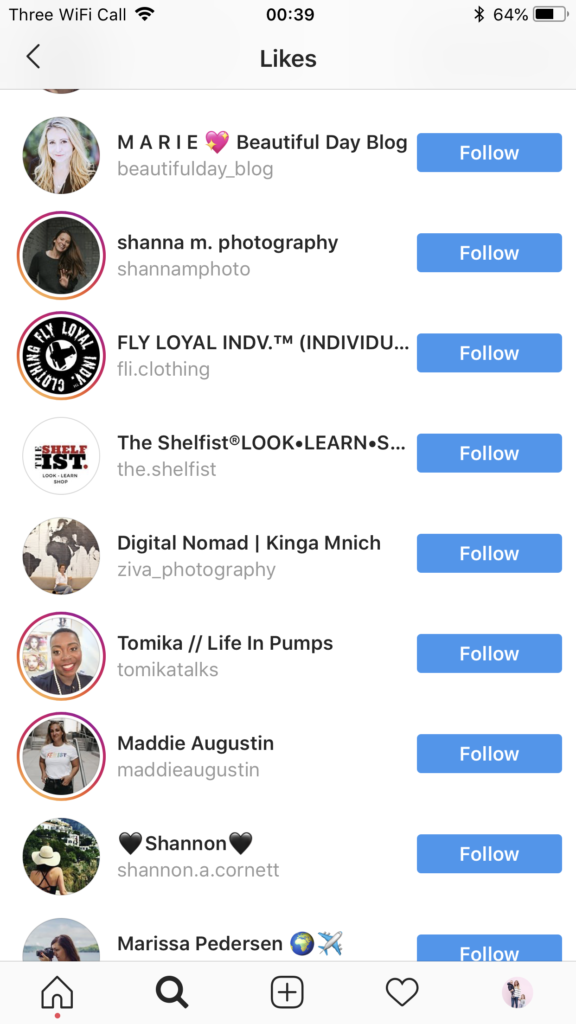 (All accounts that don’t follow the account they have liked the photo from. All business and blog accounts, no real people accounts. Barely any comments or engagement. Most based in US, when this influencer is based in the UK. This is just a screenshot of 100’s of likes just like these on this photo. Could barely find one normal real person UK account that had liked it. Surely that’s the brands target market for a UK food related sponsored post? Not an exact science but says engagement thread or pod activity to me…).

I could go into it more based on impressions and reach but that’s harder to quantify and prove because I would need people to give up their analytic data for that.

I get asked on a weekly basis to join various pods, engagements groups, loop giveaways and it’s scary to see how much of it is going on and how accessible it is to people. It’s worrying because I see so many ‘big’ accounts doing it and it being justified in all sorts of elaborate ways.

There are people who argue that it’s no different from a group of friends helping each other out. I beg to differ. For a start, no one has hundreds of friends on Instagram waiting to ‘help them out’. No one has hundreds of friends in real life!! I understand if you’ve got a group, say of 20 or under, of you who all help each other out across social platforms and blogs etc. That’s totally fine and not what I’m getting at, at all! It’s when it’s 100s to 1000s of people you don’t even remotely know liking each other’s posts that it gets more into the cheating the system territory.

Surely people should just produce great content, find their audience, monitor what does well, do more of that and grow naturally and organically? As well as being incredibly annoyed and disillusioned by the people faking it, it’s also quite sad to see people base all their worth on how many likes they are getting. It should be quality over quantity. Highly engaged content should be the aim of the game. We’re all affected by the algorithm so it’s not an excuse. You just have to try and get the algorithm to work for you, if it matters that much.

There are also the (very annoying) issues of people using bots to leave generic comments (which usually don’t make sense) and playing the follow/unfollow game going on, but Instagram appear to be cracking down on these a bit so I’ll leave these topics for another day…

I’ll be honest and say that a couple years ago I used to take part on a blogging comment Facebook group, but it wasn’t even slightly on the level of these Instagram engagement threads and pods – literally the teeniest tiny drop in the ocean in comparison. I just wanted to build up my site after I started from scratch on a new domain. I was a bit naïve and didn’t realise why people were doing it. I thought it was more to engage in the community. Not to look like your site was doing better than it was. Each post was always only limited to ten people too, so up to nine comments – not the hundreds on the Instagram threads. I haven’t gone on it in over a year.

I really hope that the poor brands paying for people’s fake/artificially enhanced engagement find a way to spot it more easily. Maybe there needs to be someone within in their team who is trained up to look into each influencer they work with. I actually worked with an agency recently where we had to sign certificates of authenticity before we could sign our scope of work contracts. It’s sad that this has to be the case, but it would appear there are always people trying to jump the system and not accept the levels of hard work the rest of us have to put in. It is incredibly insulting to see people who are buying likes/followers or artificially enhancing their accounts through threads and pods on the same campaigns as people who just simply work hard.

Is it a case of if you can’t beat them, join them? I really hope not. I hope the industry catches up with it and the brand deals stop for those who choose to go down these routes.

At the end of the day if a brand is paying good money to reach a certain audience, that they believe we have, then it is beyond unfair for us influencers to feed them artificially enhanced stats, where it is essentially just a big pool of other bloggers/influencers/creators who have liked the content. It becomes fraudulent on top of being morally and ethically questionable.

*This is not directed at anyone in particular.

So you want to get free products from blogging?

Why I Started Blogging