Toddlerhood is a strange time. A time where emotions can’t be controlled. A time where a decision between a red cup and a green cup is often too much to bear. A time where some days we don’t even want to wear clothes. So how do you tell a toddler their little bubble of a world is about to be turned upside down with the arrival of a new baby? 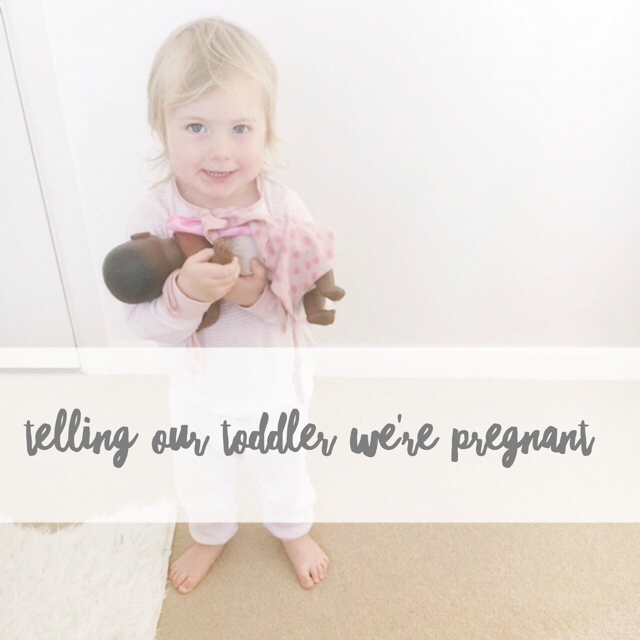 Little I was actually the first person I told, even before the husband because he was out of the house at the time. I didn’t expect to be pregnant so was just taking the test for the sake of it. She was only 20 months old, and obviously didn’t fully understand what I was telling her, but she actually went ‘ooh beebee (baby)’ and lifted up my top to give my tummy a kiss. She then kept saying ‘sishtur’ over and over again, which was slightly concerning as we wouldn’t be telling anyone for a while!

As her speech and understanding is developing, we try to include the baby in conversations with her. She gives my tummy lots of kisses and I think as time passes, and bump grows, she’ll start to grasp the concept of a baby being in my tummy a little more.

Once the baby arrives I’ll have a couple little gifts and a card/badge lined up to make her feel part of it and special. I also think it would be a nice touch for her to have a little gift to give her baby brother or sister too. Exciting times. I still can’t believe it!

I honestly think Little I will make such a wonderful big sister. Yes she will be a bossy boots and yes she’ll probably be a bit loud and rough to begin with, but she is such a caring little soul and will be so excited to have a new baby brother or sister to help with. She is dolly obsessed and loves nothing more than rocking her ‘been’ to sleep and telling us all to ‘shhh’. The timing is as perfect as it can be age gap wise (not husband deploying wise!!) and I think she’s more than ready for the role of big sister. In a way I think she needs it because she loves the company of other children, and tends to act out a little when she’s just stuck with me and the husband. Her brother or sister will be a welcome distraction!

How did you tell your child you were having another baby?