Before I start, I am not trying to offend anyone and this is a complete tongue in cheek post. I know everyone who says these things mean well and I’m not bitter and angry. They are just a few sayings we have had directed us along the way that have made me laugh. 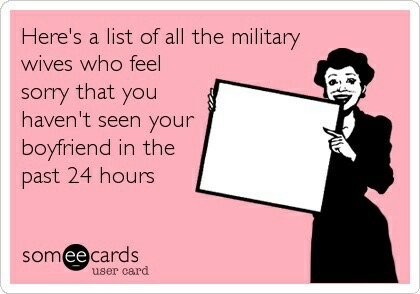 Um, I’m glad to hear it is for you. When I’m trying to get to sleep at midnight feeling a bit lonely, when the toddler is kicking off for no reason for the fifth time that morning, when I’m doing the nursery run/bedtime routine alone yet again, when I’m eating rice crispies for dinner again or when something breaks again for the millionth time and I have to sort it myself, it sure doesn’t feel like it’s going fast for us.

‘Oh gosh I know how you feel, my partner was away on business last month for x days/weeks/basically any time under the deployment you’re going through’

Was he in a hotel? Did he have a phone connection? Could you Skpye? Could you message or speak in some form every day? Did he return on a civilian flight when he said he would, perhaps bearing gifts? If there is a yes to any of those questions, then (fortunately for you) you don’t actually know how it feels. But I’m glad you don’t because I wouldn’t wish it on anyone!

Do you know what? I think it might be! Haha. When one of a child’s parents randomly disappears one day, I think they are bound to notice, no matter how young they are. I underestimated how much it would actually affect Little I and feel silly for that, so I do get why people ask how much it’s affecting her, but not if it’s affecting her.

‘You are so strong, I couldn’t do it’

I do genuinely appreciate the strong part. It’s sweet and it’s nice for that to be noticed but saying you couldn’t do it doesn’t make sense. I didn’t actively choose to meet and marry a military man. It kind of just happened. He creeped up on me one day and I haven’t been able to get rid of him! You are just with whoever you fall in love with and that’s that. You would be able to do it if you had to :)

To the toddler: ’Do you miss dada?’

Oh no, she could’t care less!! Come on now, what do you think? A. you’ve just reminded her that her dad isn’t around and b. why wouldn’t she miss her dad? He’s one half of her set of parents. One of her best friends. One of her rocks. What a silly question!

This really does make me sound like a bitter and twisted military WAG but it is genuinely just meant for a laugh! I know we’re a military family and deployments are part and parcel of that. We’re doing just fine (most days!) and have some great support through friends and family. I know everyone who says these things means well, but on particularly bad days, it’s hard not to want to slam your head against a wall, or laugh hysterically, when someone says one of them.

Maybe it’s just because I was pregnant/breastfeeding during this deployment and can’t drink my way through it as much as I’d like!