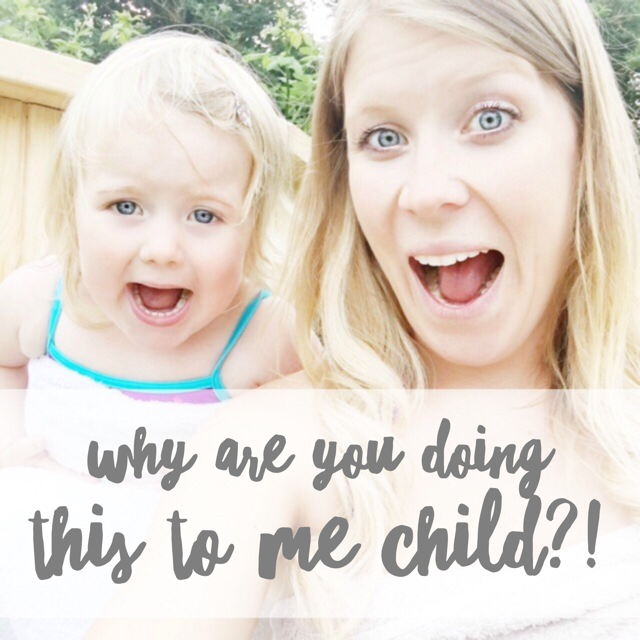 So this morning was a tough one. I’m back in the office after our baby scare the other week, which is great (that’s not the tough part), but Little I had a full on melt down this morning. It started with her falling out her cot, which she’s never, ever done. She’s never even attempted to get out and we were of the mindset that until she tried to get out we’d  keep her in the cot and then once she looked like she wanted to get out more, we’d take the side off and try her in a bed with a bed guard. She just decided to skip the trying and just throw herself out the top.

She also decided last night that she wanted to do a wee on the toilet, and actually did it. She’s been faffing around with ‘pants’ (pull up nappies) and potties for a while now, but hasn’t actually been doing anything, but lo and behold we witnessed an actual wee last night. Please, please, please send me ALL the potty training tips…

It’s great and I’m so proud of her wanting to try more grown up things, but I’m also a bit like ‘what are you doing to me child, your dad just left and you want me to deal with all this too!!!’. I mean come on, I managed to fix the baby gate myself last night. Surely that’s enough for this week haha.

She didn’t want to get ready this morning and didn’t want to go to nursery, which is so unlike her. She loves the place and I usually have trouble trying to get her to leave in the evening when I pick her up. When we were driving there we usually have a chat about who she’s going to see and who she’s going to say good morning and give cuddles too. She didn’t want to talk about anyone and just started crying. When I tried to get her out of her car seat she just cried and cried and kept going ‘no mama go, no mama go’ over and over again.

If you watch our vlogs, you’ll see that she’s the most independent, confident little thing and to see her like this is just heartbreaking.

It took about ten minutes of howling (her, not me) to get her out the car but eventually she calmed down. I had to carry her round to her area in her nursery, which again is so unlike her because every morning it’s ‘ILA WALK, ILA WALK’. This morning, however, all she wanted to do was do her best koala impression and not let me go.

Her BFF, P, was so excited to see her and Little I just didn’t take her on at all. They usually run at each other and give each other the biggest hug but Little I just didn’t want to, no matter how much I tried to coax her. Poor P even had her arms outstretched, with the biggest smile on her face, going ‘Ila Ila’ – oh the heartbreak. The only thing that seemed to bring a slight brightness to Little I’s eyes was the sight of all the dollies – she is baby obsessed at the moment (handy with our impending arrival in a few months).

I’m sure she’ll be fine and will perk up today, but I’m left with the horrible feeling of guilt about it all, even though I haven’t done anything wrong!

Anyhow, enough rambling, that’s where we’re at this morning.

I know this stage will pass. I know it’ll be a lot better in a week or so. But for now it’s crap. And I’m kind of wallowing in it.