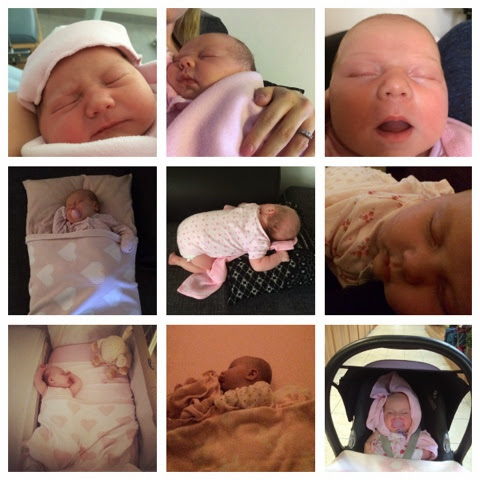 I know I am 100% going to jinx myself here by writing a post on sleep routines in babies but here goes!

Sleep, whether it’s your own sleep or your baby’s sleep, is the holy grail of parenting. It’s the main topic of conversation in those first never-ending weeks and something we, as parents, strive to perfect from as early as possible. Apart from a 5 week blip around 3 months when Isla was really colicky we (TOUCH WOOD) have been really lucky with the way that she sleeps. I do believe that it is, in part, related to the sleep routines we put in place when she was pretty young.
Before I start, I just want to say, I know all babies are different and some babies just don’t want to sleep no matter what routine or tips and tricks you try. I understand this and don’t want to sound patronising whilst writing these tips that have worked for Isla’s sleep routine. It’s literally just to try and help people who haven’t yet tried every trick in the book!…

When babies are newborn they can’t self settle and so it’s a bit pointless trying to get them into a strict routine. You’re feeding on demand and a lot of the time each day differs to the next. After the first 4-6 weeks settled down we tried to start implementing a rough sleep routine for Isla.
It basically consisted of a bath, a bottle and bed (and to begin with, a bit of sleep sheep help). Simple huh!! It certainly didn’t feel it at the time. Isla used to fight sleep and would take a good 2 or 3 goes at settling down in her bedside crib. Nevertheless we persisted with this mini routine and by sticking to a few rules, we started to reap the benefits.
The rules were (and we still stick to these):
– no rocking to full on sleep. We would maybe, as a last resort, rock her till her eyes were droopy but not till she was flat out sleeping. We didn’t want her to get used to it and need it every time she slept
– if she needed settled whilst in her cot, instead if lifting her out and settling her, we’d put a hand on her tummy or lie next to her
– we would make sure the last hour or so before bed was a bit quieter and darker than usual in whatever room we were in
– we would not let ourselves get stressed about not sticking to exact times because she’d pick up on the stress and react badly
So that was the beginning of our sleep routine journey. Even though we knew we’d be up 2 or 3 times in the night we did try to stick to it starting around 8pm.
Fast forward to when she was colicky and we were having an absolute nightmare! We still stuck to all the rules but she would just scream and scream. Unfortunately it’s just one of those things you have to let play out. There’s not enough known about why it happens.
After she got over that we found things had changed a little with regards to her sleeping so we had to adjust a few bits and bobs.
First of all she refused to sleep on her back. Cue health visitor gasp!! We fought with her through numerous bedtimes and then one day I rolled her onto her side by mistake and boom she was asleep! From then on she’s always slept on her side. We used a rolled up towel or blanket as a wedge to keep her in that position because she kicks off if she rolls back onto her back in the night.
Here goes another health visitor shocker!!! We also realised that in order to get to sleep she likes to have her cat toy right against her face and either a muslin tucked in there too or…over her head! We did check that you could breathe through the muslin before we let her do that. We’re not evil parents after all!
Once she dropped the 2am bottle and started having her last bottle at 9pm-ish, we knew we were into a winner.
This is where we are now…
Around 8pm – Isla gets a bath, some playtime in the bath and a massage (I’ve now been on a course don’t-you-know!)
About 8.45pm – she has her last bottle (an ounce more than all the daytime bottles)
About 9.15pm – she gets put down in her crib awake, on her side, with her toy and muslin and either in her sleeping bag or with a blanket tucked in round her
She is then left to fall asleep. It usually takes about 10 mins and she now rarely makes a peep. If she does cry out I’ll go in and just put a hand on her tummy.
Another thing to mention is what we call the golden window of opportunity. It’s that period of about 10 minutes that we have where Isla is looking sleepy, droopy eyed and rubbing her eyes. If we don’t catch her then and make sure she’s having her last bottle or on her way to bed, we know we’re in trouble! The same applies for naps.
Isla technically naps once or at max twice in the day not including the time she goes back to sleep after her 5.30/6am bottle. If she doesn’t get at least one nap we can be in a bit of trouble at bed time. When she does nap I try to put her up in her crib. When she was younger I let her sleep downstairs around loads of noise so she’d be able to sleep through it.
And a last thing to talk about is her feeding around bedtime. Sometimes she gets a bit funny and will literally only let me feed her. It’s bizarre! She takes a bottle from anyone during the day quite happily. She also likes to pretend she’s breastfed at night (don’t ask) and will only take her bottle if she’s on her side cuddled into me. We also give her an extra ounce of milk at night to try and see her through and give her the 5.30/6am bottle in bed so she stays relatively sleepy and goes back to sleep for a couple hours.
So we now usually get 9pm-5.30am with Isla asleep and then up for a bottle that she drains in 5-10 mins and back to bed for another 2ish hours.
Sometimes after the 5.30/6am bottle I do have to take her into bed to get her back to sleep (aaaand yet another health visitor shocker!) but I’m happy with that just now as she’s still young and the cuddles (minus the pinching and face grabbing) are lovely.
And that’s it. Phew! Sorry it’s long but I know how popular a topic baby’s sleep and sleep routines are and just wanted to share our experience so far.
How do your babies get on with their sleep routines?

Memories Of Our 1st Christmas