Travelling by Ferry with Kids

When heading abroad in the past, I have always found myself immediately looking for flights and not taking travelling by ferry into account at all. I’m not sure why! Maybe it’s because that’s the way most holiday packages are sold and just the way I’ve always tended to travel. When P&O ferries (link to P&O Ferry site) got in touch and asked if we fancied heading over to France for a day trip with them I thought ‘why not?!’. It seems silly that we live just across the water from France but have never ventured over via water. 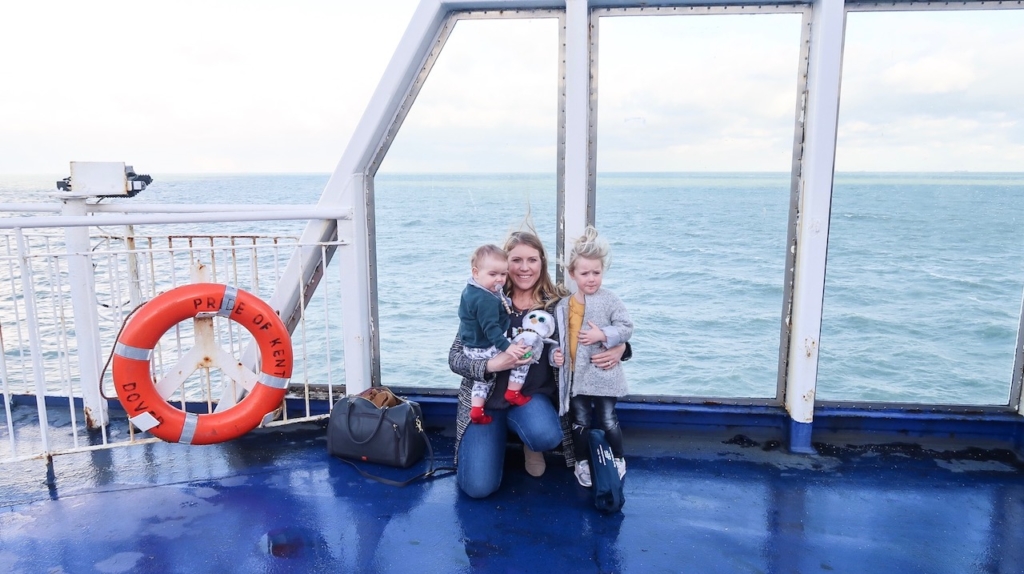 We decided to head over for the day on a Friday so that we would have that weekend feeling, on top of the fact that it was the 1st of December so we were definitely in the Christmas spirit. What’s great about travelling by ferry is that you don’t have to worry about luggage allowance and getting kids out of buggies and through security etc. You just potter on through in your car, with the kids safely strapped in the back not causing mischief, and it all feels a little less rushed and stressful. Being able to get the buggy out and have it to wander around the ferry with as well is great too.

Driving through the port at Dover was relatively straightforward. We had a bit of a mix up between passport control and the check in where it was unclear who had to go through security and who didn’t. Once we got through that and got to the check in kiosk, we were given a tag to hang from our interior mirror and told which lane to drive to for boarding. 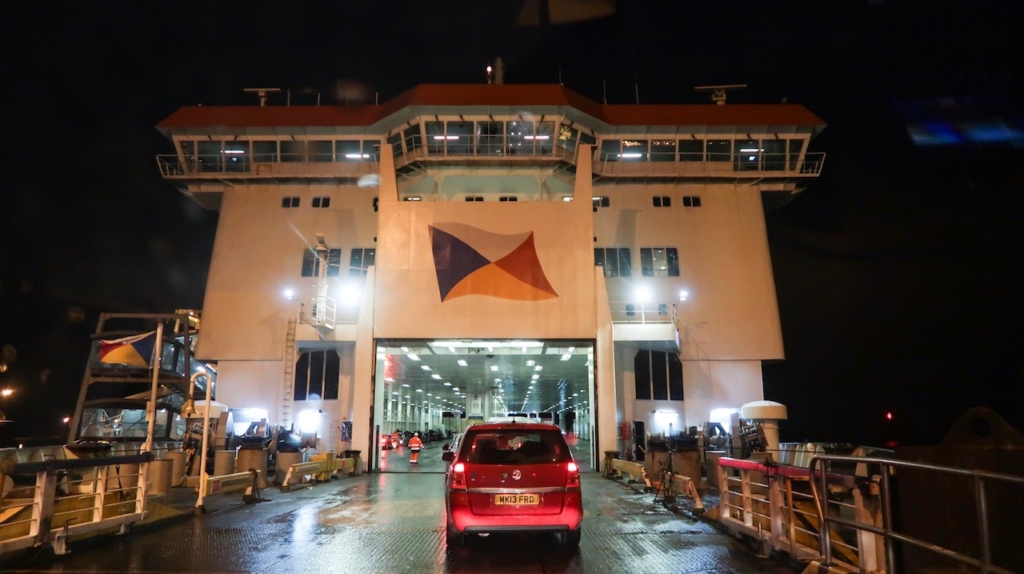 Boarding started less than five minutes after we parked up and was really straightforward. We were guided onto the ferry and it seemed to be a pretty quick and efficient process to get all the vehicles on board. 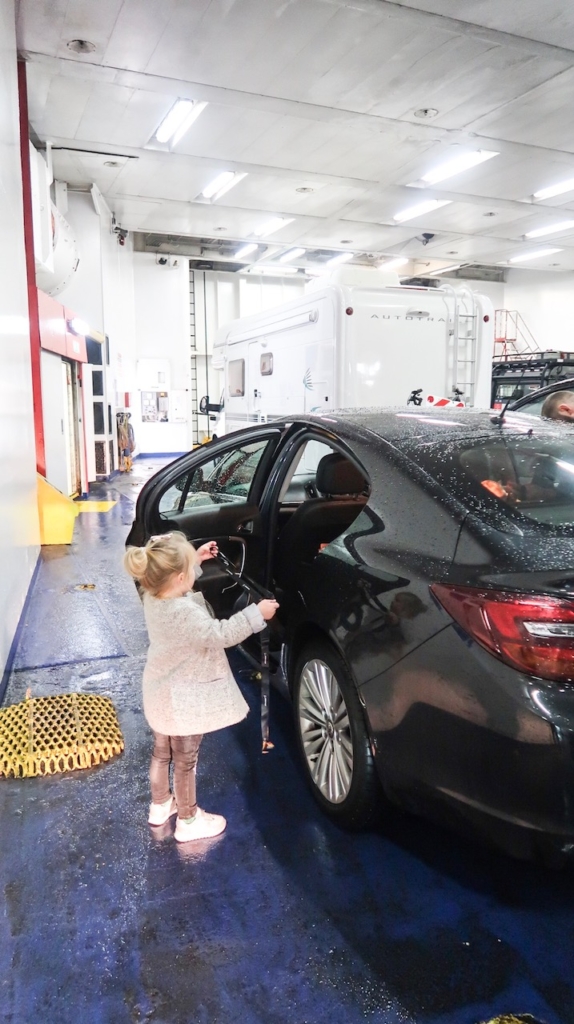 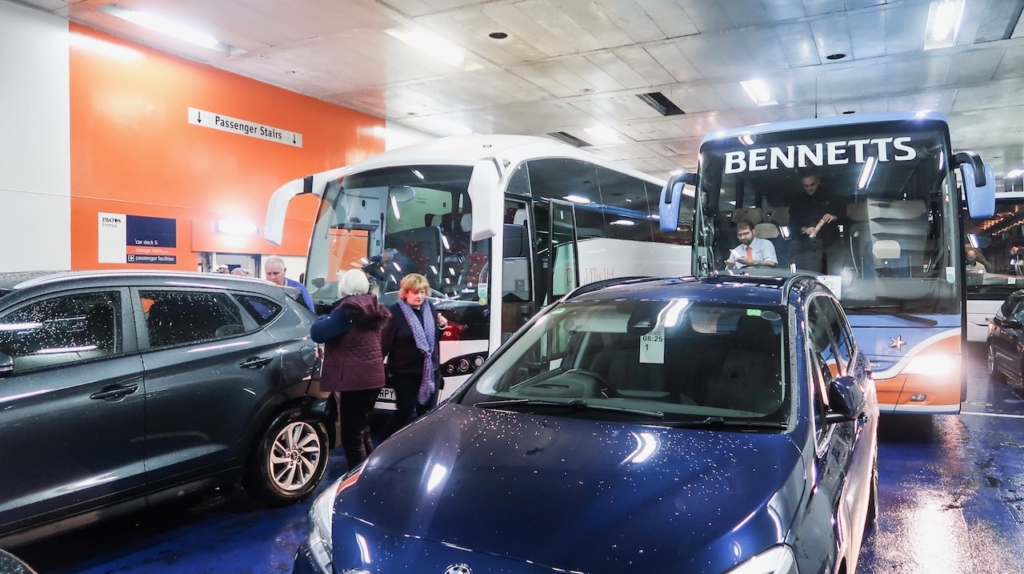 Once we got up to the upper decks we fancied a bit of breakfast so decided to go to the The Brasserie restaurant instead of the Food Court restaurant (less of a queue!). We ordered some drinks and then had to wait to order food as they were going round the tables in order of who had arrived first. The drinks came pretty quickly and the coffee was lovely. Rob had a full breakfast, the kids had the kid’s breakfast option and I had eggs benedict (a fave). The food didn’t take too long to come out, considering the restaurant was full, and all our meals were lovely and hot, and tasted good. 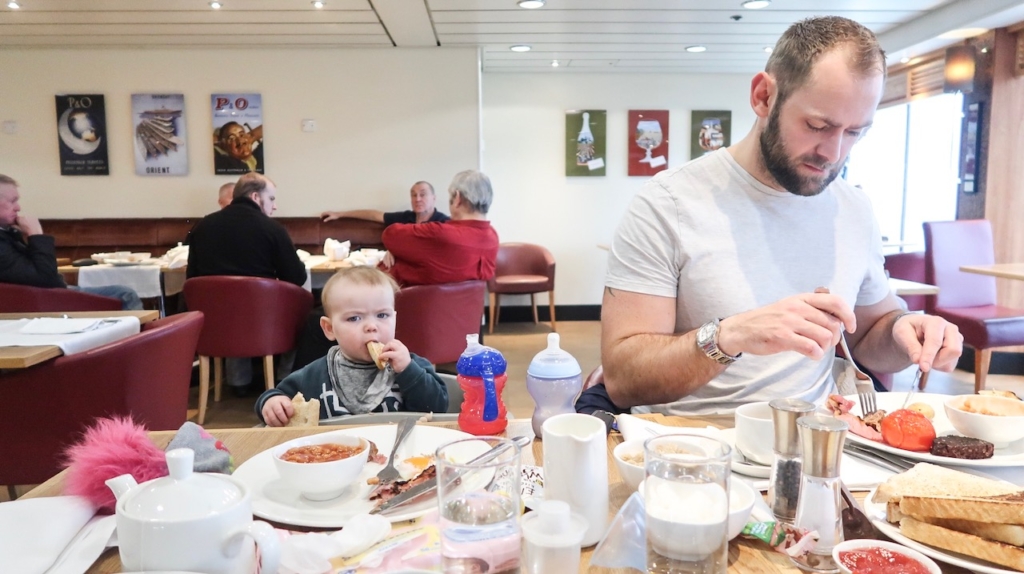 We then had a wander around the ship and checked out the facilities. There were plenty of toilets (with baby changing) around, and some shower facilities too. I had arranged to change some pounds into euros before we left via P&O’s website. You can go on and book your currency exchange to pick up when onboard, at the exchange desk. SO handy for this parent who has zero time in the day to be hunting down currency exchange places prior to leaving!

The on board shop was opposite the currency exchange desk so we popped in to have a nosey on our way past. There was a wide variety of products on offer – similar to what you get in the duty free shops at airports. Perfumes, toys, confectionery, alcohol and much more. We needed to pick up a few car bits for driving in France and found a ‘European Car Motoring Kit’ which was really handy. Little I insisted on carrying around the ferry for the rest of the journey! 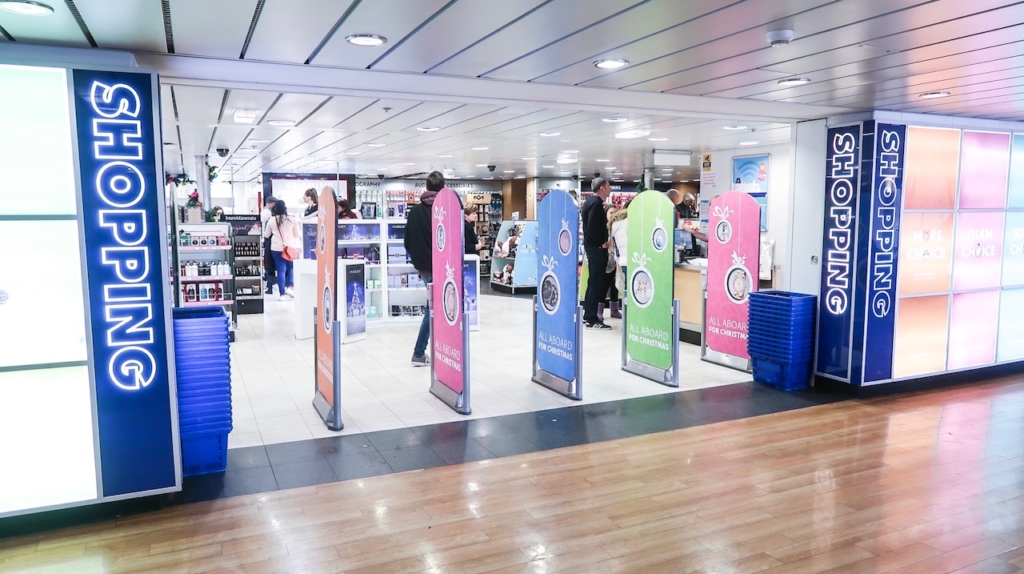 We headed up to the upper deck to let the kids see outside and the ferry moving on the water. It was super breezy but there were plenty of wind shields and gates around to keep us safe. There was lots of space to move around and some tables and benches to sit at, which I’d imagine would be quite nice in the summer months. The kids loved waving at another P&O ferry that went past us. 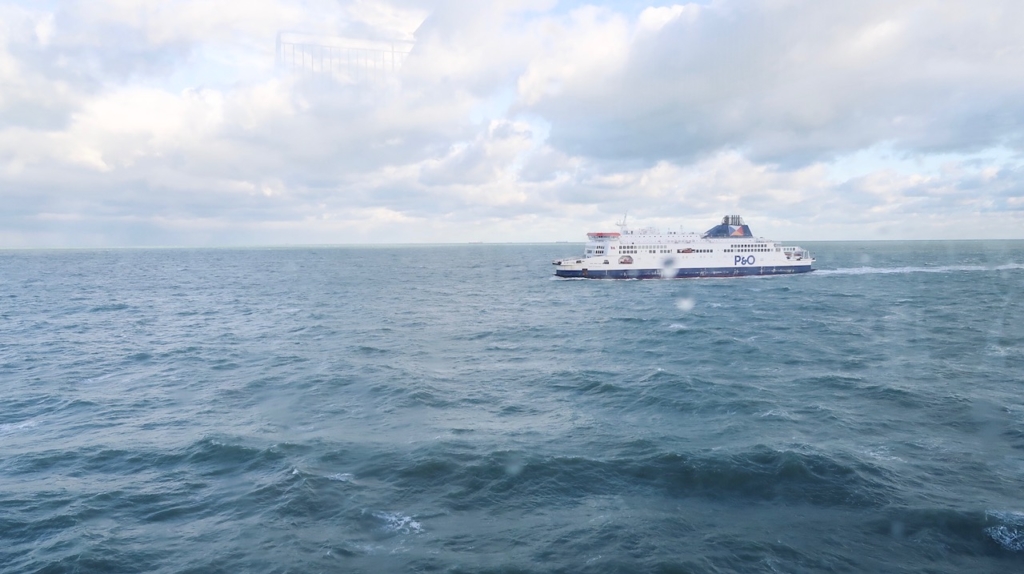 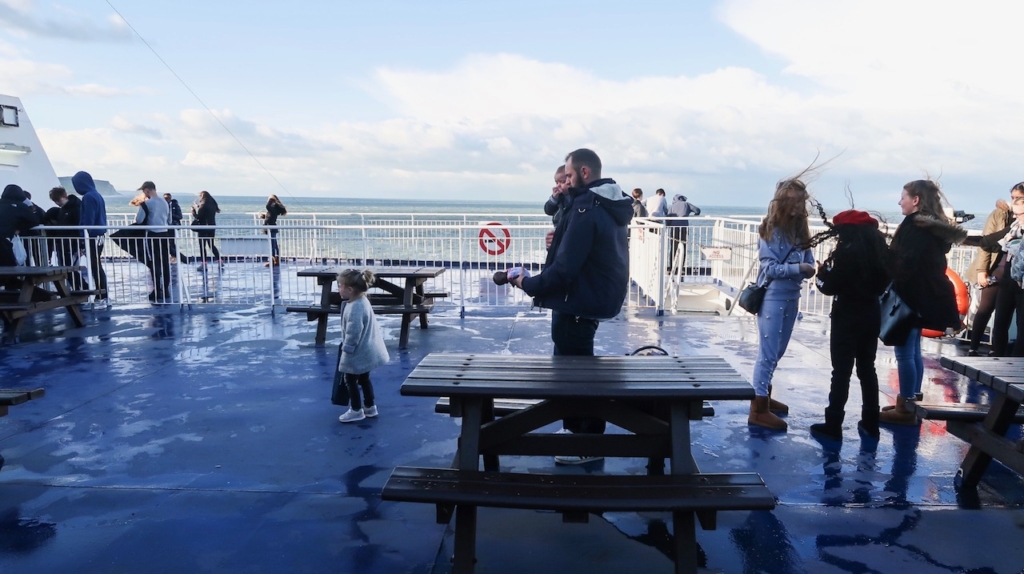 The family lounge and Kids Zone were a good set up. It’s basically a big area with lots of seating, a bar and coffee shop, TVs (that were playing kid’s films when we were on) and a play area. The play area was bright and colourful with a few wall toys, a standalone activity toy and some kid’s table and chairs. We got a seat and table right next to the kids zone, on our ferry back at night, to grab a coffee and snack, which was great because it was easy to keep an eye on the kids and let them burn off a bit of energy. 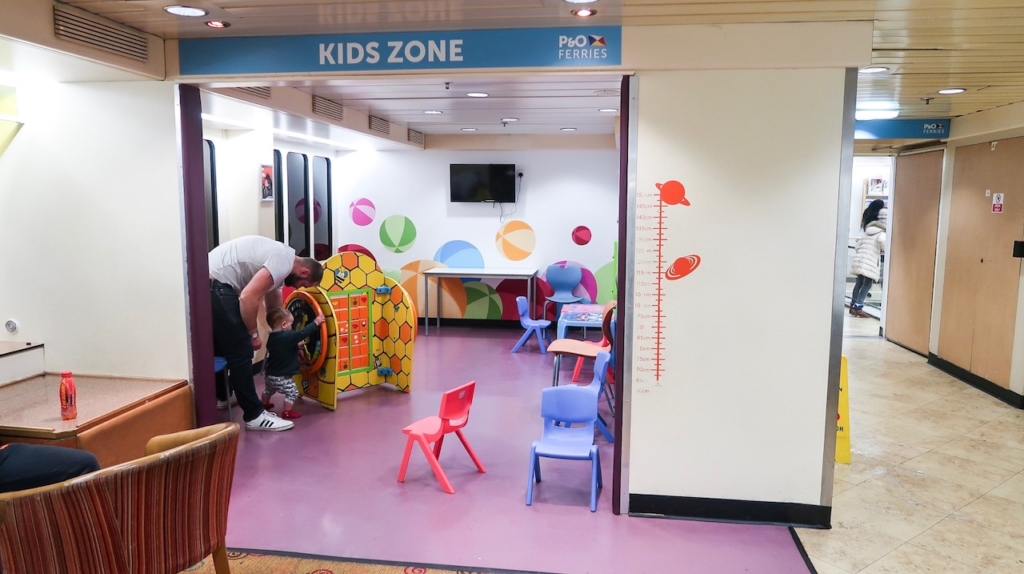 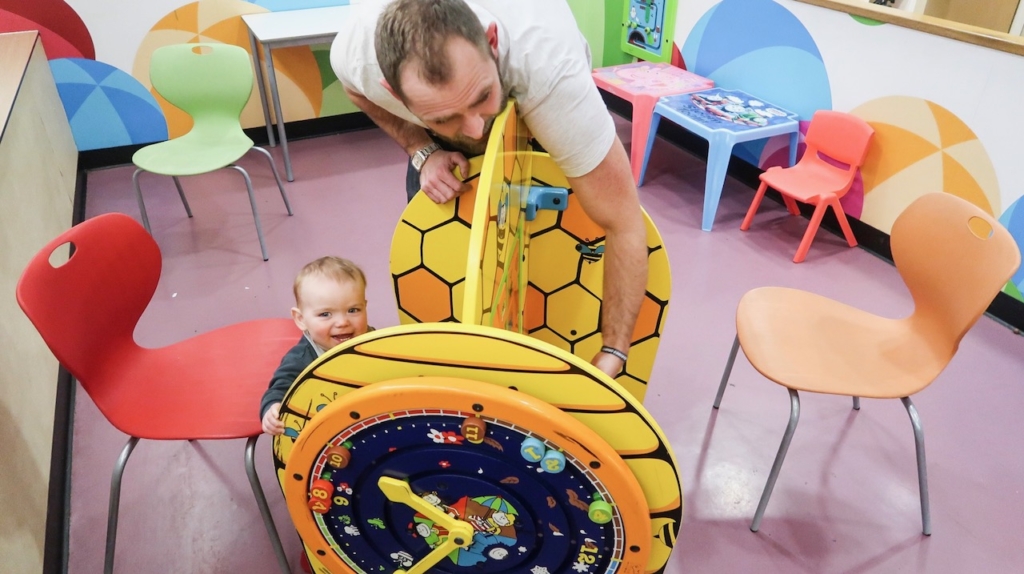 The café was good. It served Starbucks coffee – always a winner – and I got my first festive Red cup of the season! We shared a pizza which was tasty but the husband didn’t realise it had loads of onions in it and had to pick them all off for us! We took a peek into the food court as well just to see what it was like and it is a canteen type set up with quite a few varied option on the menu. 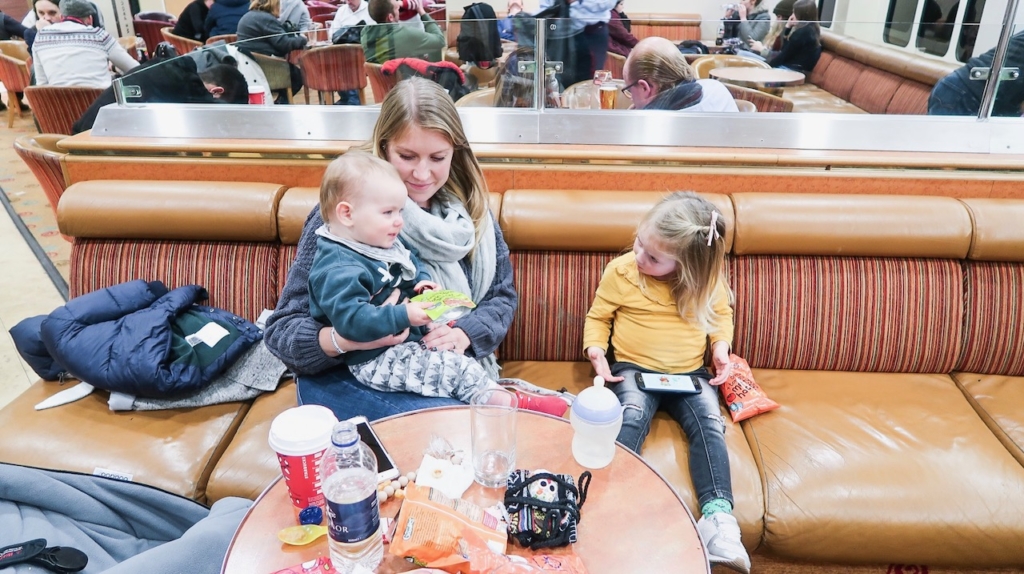 On the way back we had a slightly different ferry but it was just as easy and had very similar facilities. 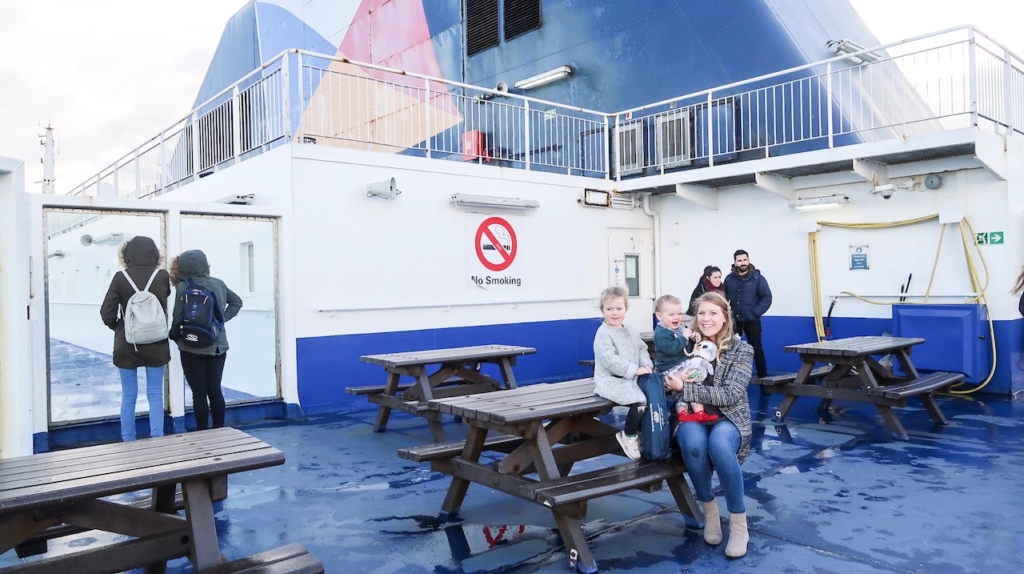 Overall we had a really good experience on our day trip to France with P&O Ferries and would definitely recommend it as a fun day out for all the family. A super easy way of travelling to France with kids. Just have a plan of where you’re heading to once you get off the ferry and off you go!

*This post is a sponsored collaboration with P&O Ferries but all thoughts and opinions are 100% our own.

The Bluestone Series: Getting Here

Our Day Trip To France