A couple weekends ago we tootled on up to London for a little trip, which included going to, and reviewing, the Warner Brothers Harry Potter Studio Tour. Bizarrely I wasn’t the biggest Harry Potter fan till about a year ago. I’ve jumped on the bandwagon rather late and never used to see what the fuss was about, but now I’m obsessed. I love a bit of Harry Potter and have loved re-watching all the films. 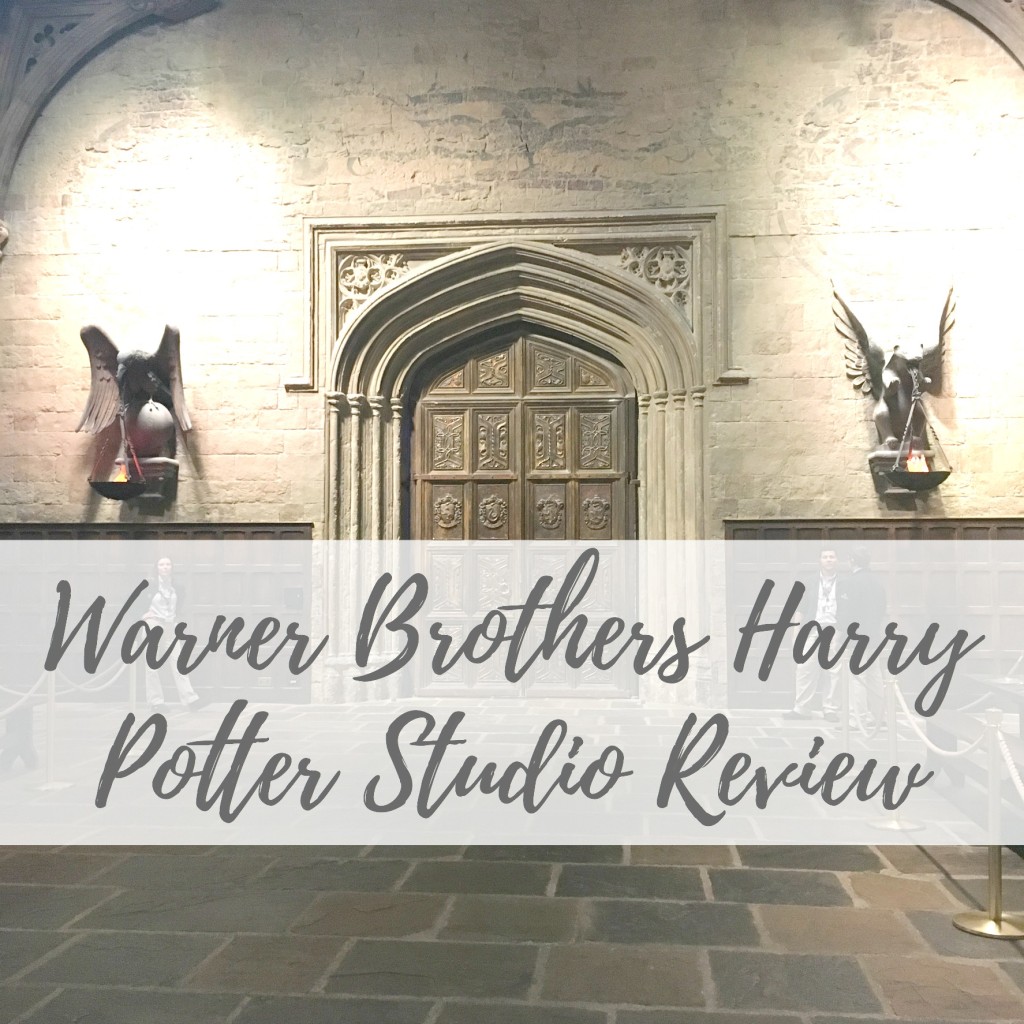 When we turned off onto the road leading up to the Warner Brothers Studios, we were greeted by a very helpful attendant who checked out reference no and directed us towards the car park, and his colleagues there. We were then directed to an empty space by another attendant. It was all very efficient. 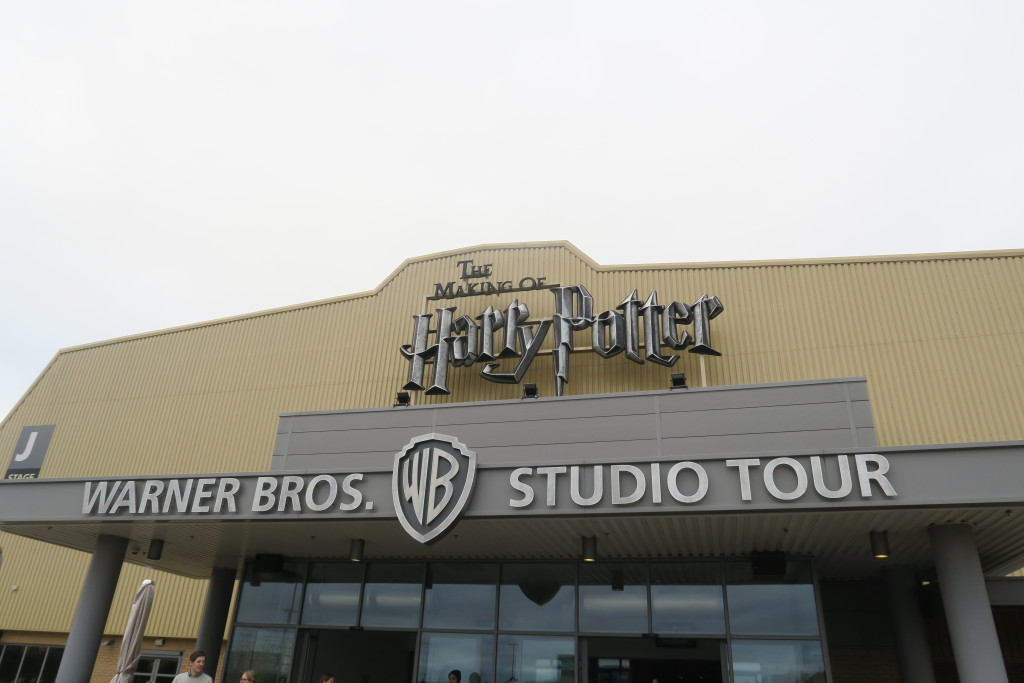 The first thing that struck me was the size of the place. It’s huge! There are two studios, J Studio and K studio…get it?

We walked from the car to the studios and picked up out tickets from a machine outside. All you had to do was type in your reference number and last name, and your tickets popped out the bottom of the machine.

We then went through a baggage and security check, which didn’t take much time at all. The entrance hall that you walk in to is huge! It has a café, a Starbucks stand, toilets, cloakroom, an entrance to the shop and then the main entrance you queue up for to get into the studio tour. We did have about a half hour wait to get through, but it was the last day of half term so it was to be expected. 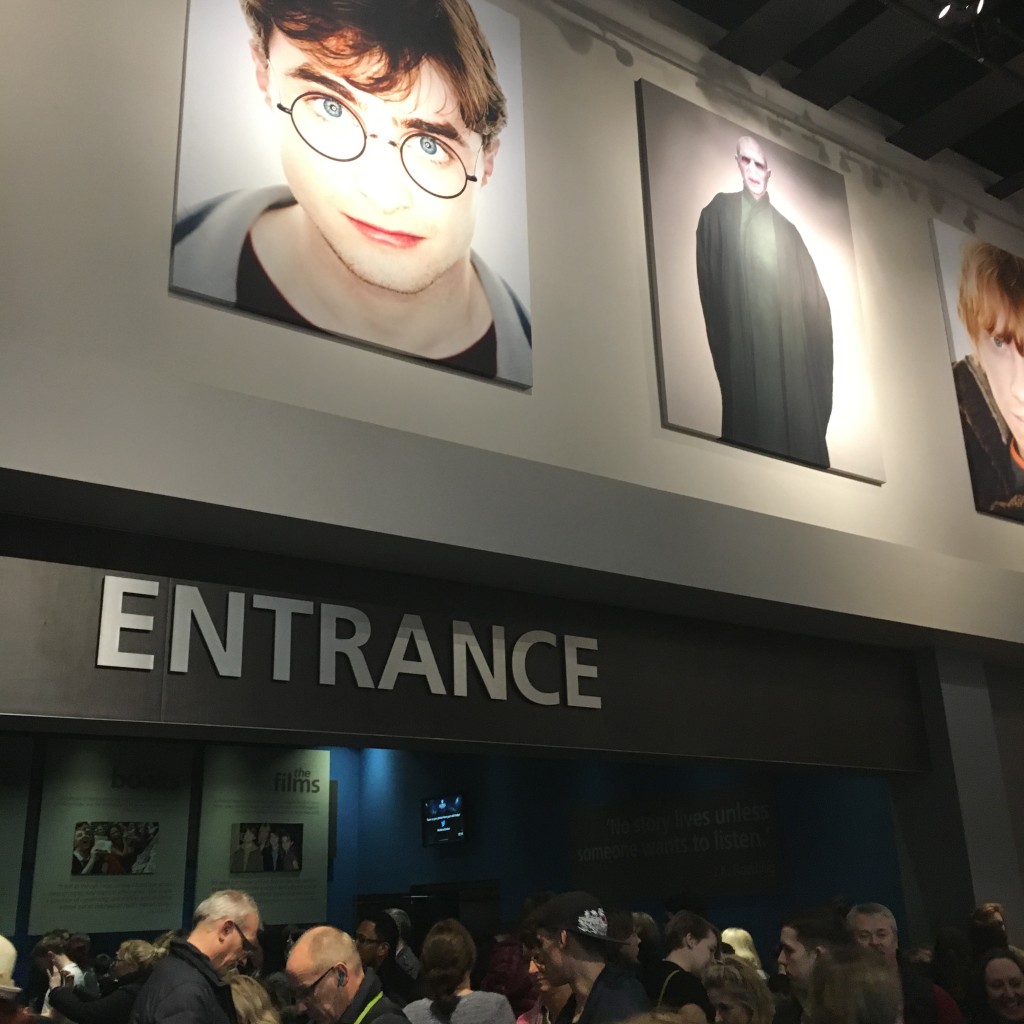 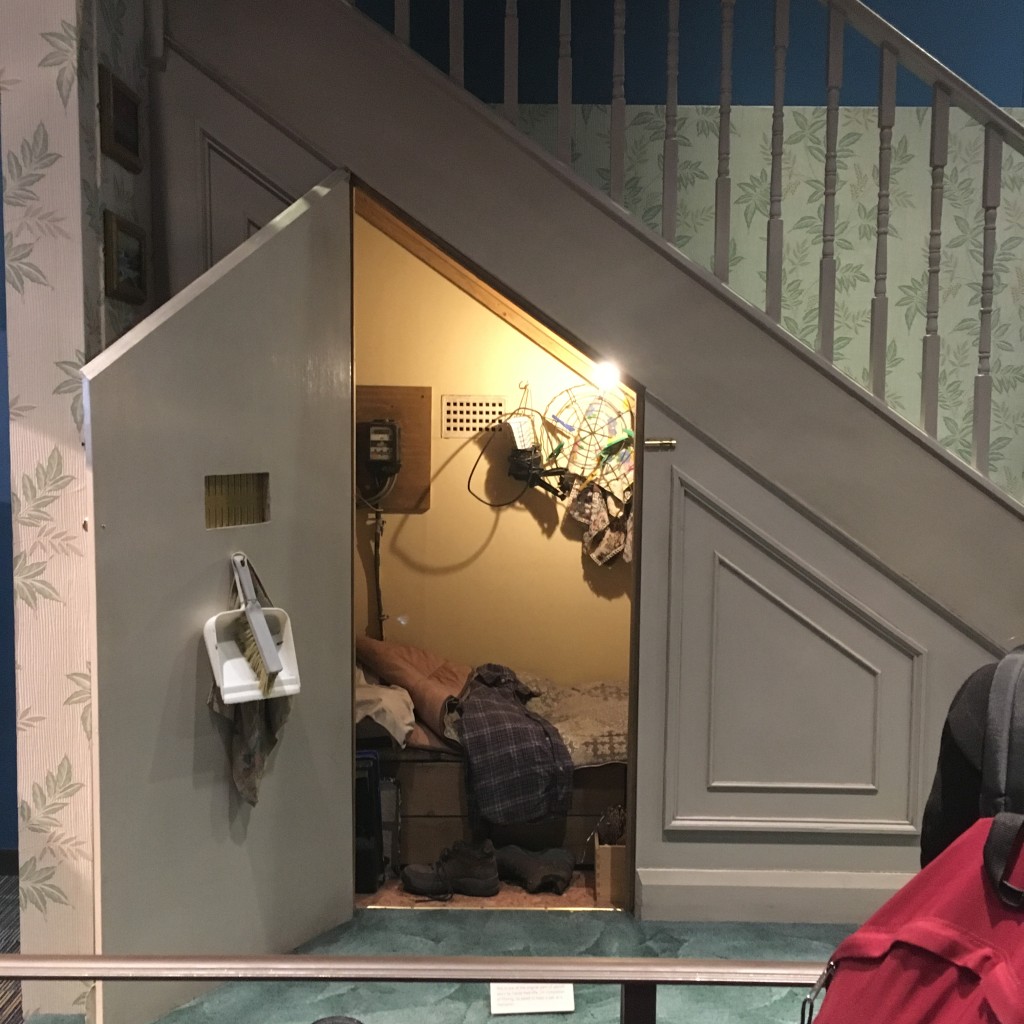 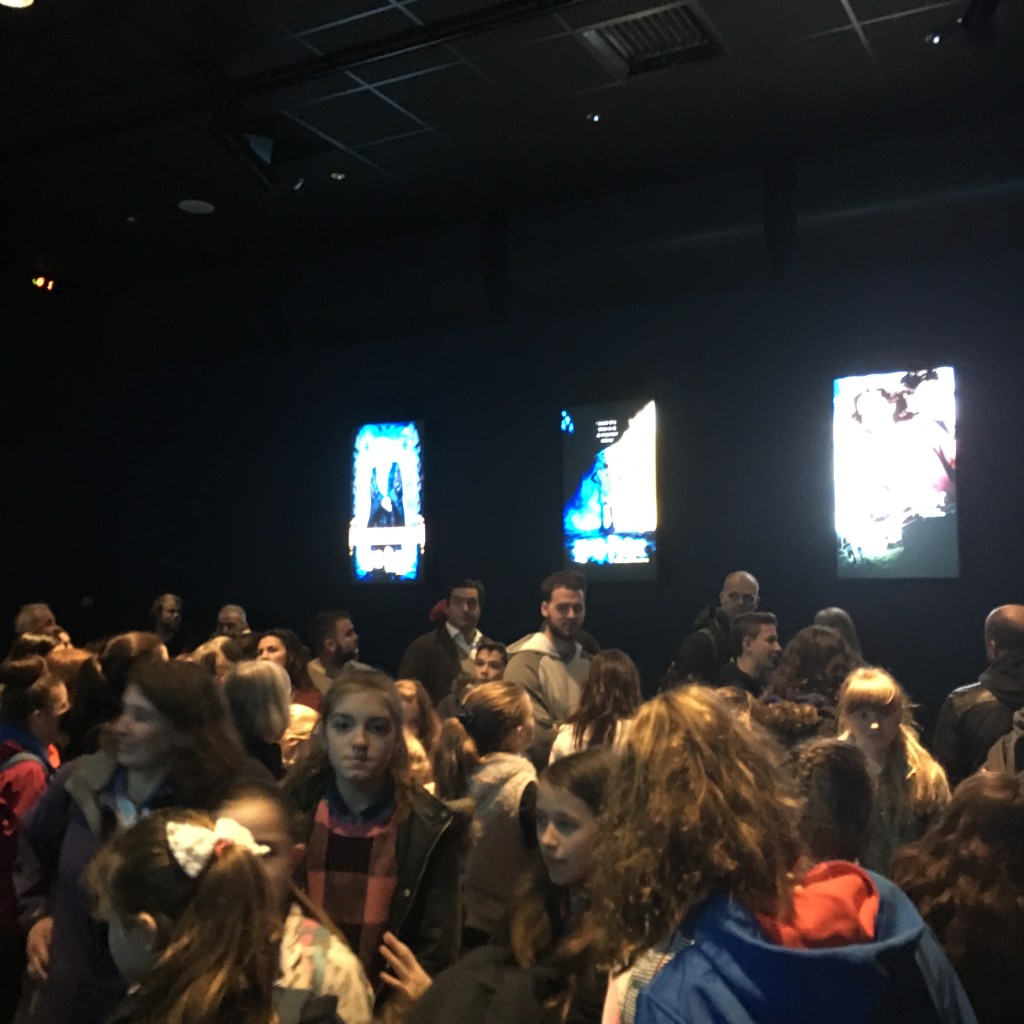 Once we got through the queue for the entrance we were taken into a room and a guide told us a little bit about the studios and the history behind the making of the Harry Potter films. They also explained some ground rules and how the studio tour works. There was a short video clip then we were taken into a cinema room to watch a short film about the making of the films. Daniel Radcliffe, Emma Watson and Rupert Grint featured in it and it was incredibly interesting to see lots of behind the scenes footage of all the staff involved. 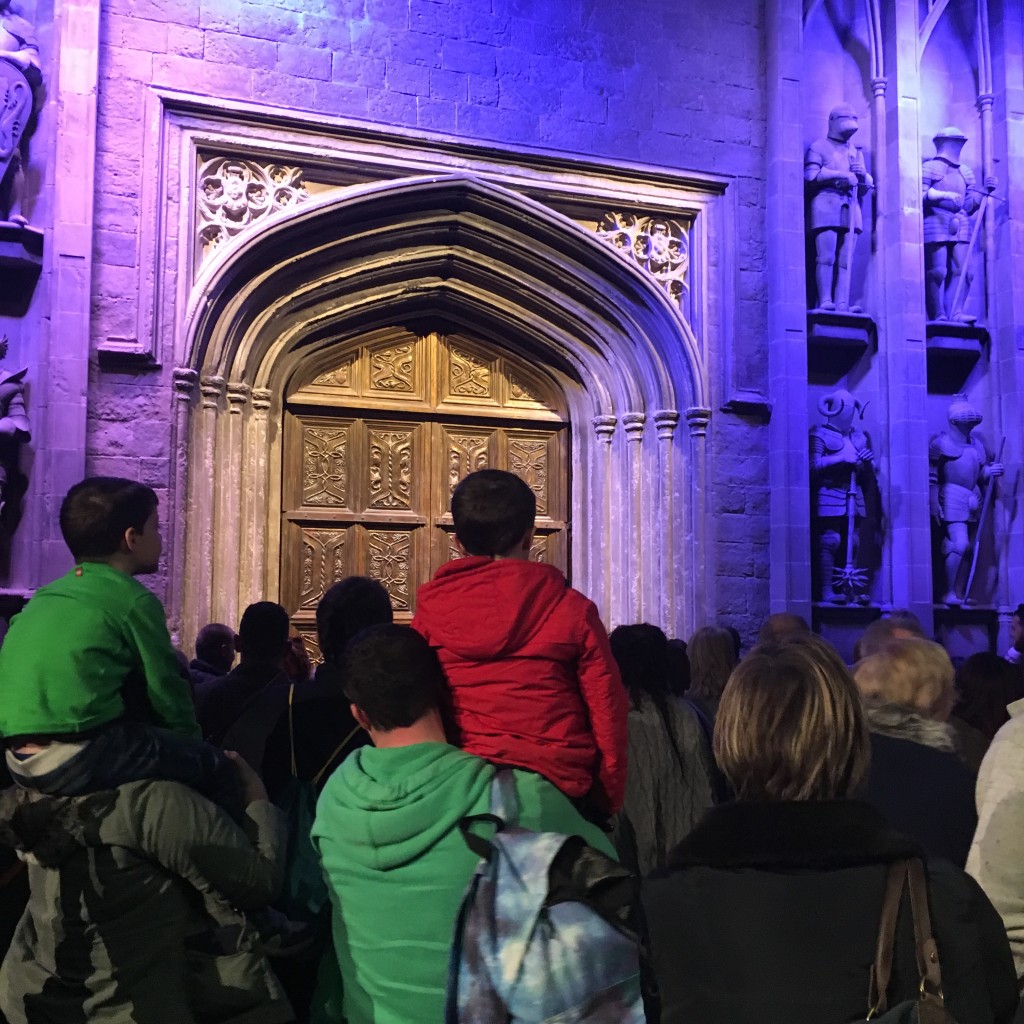 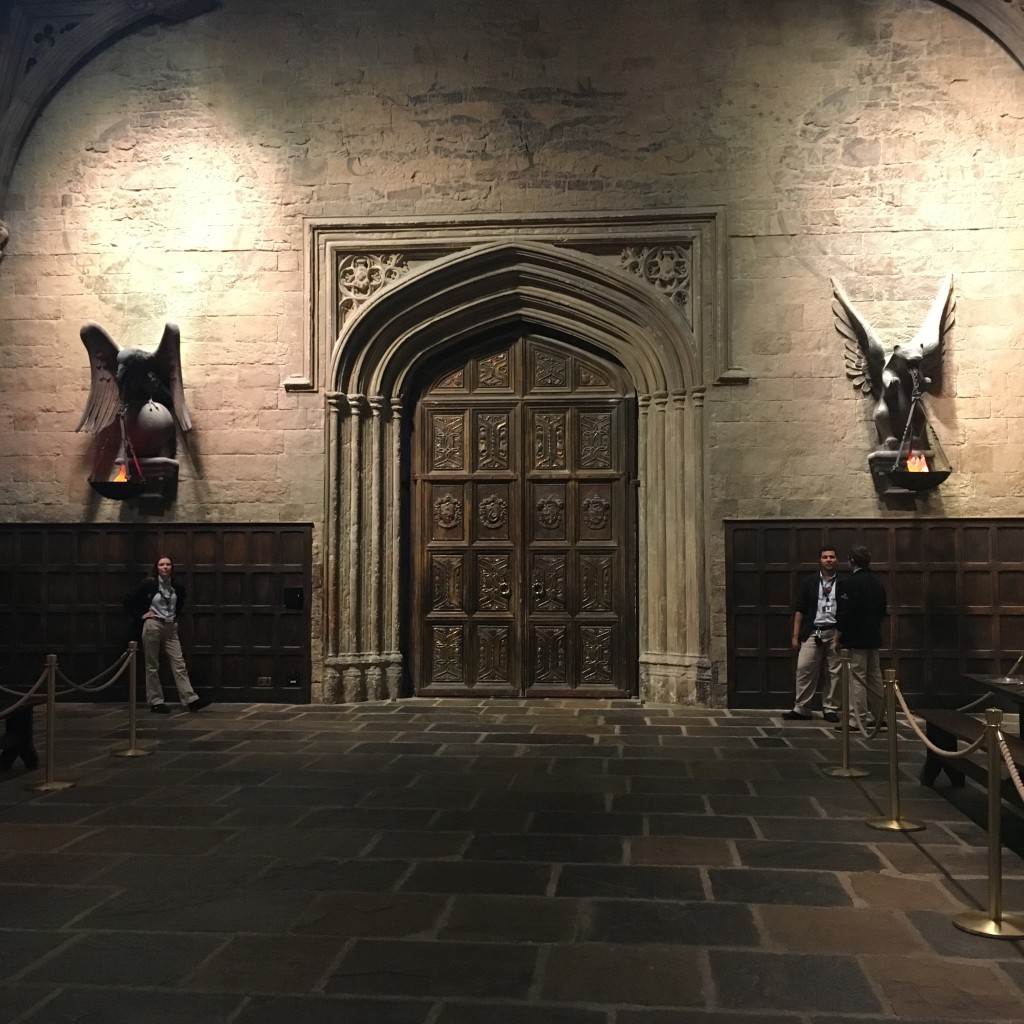 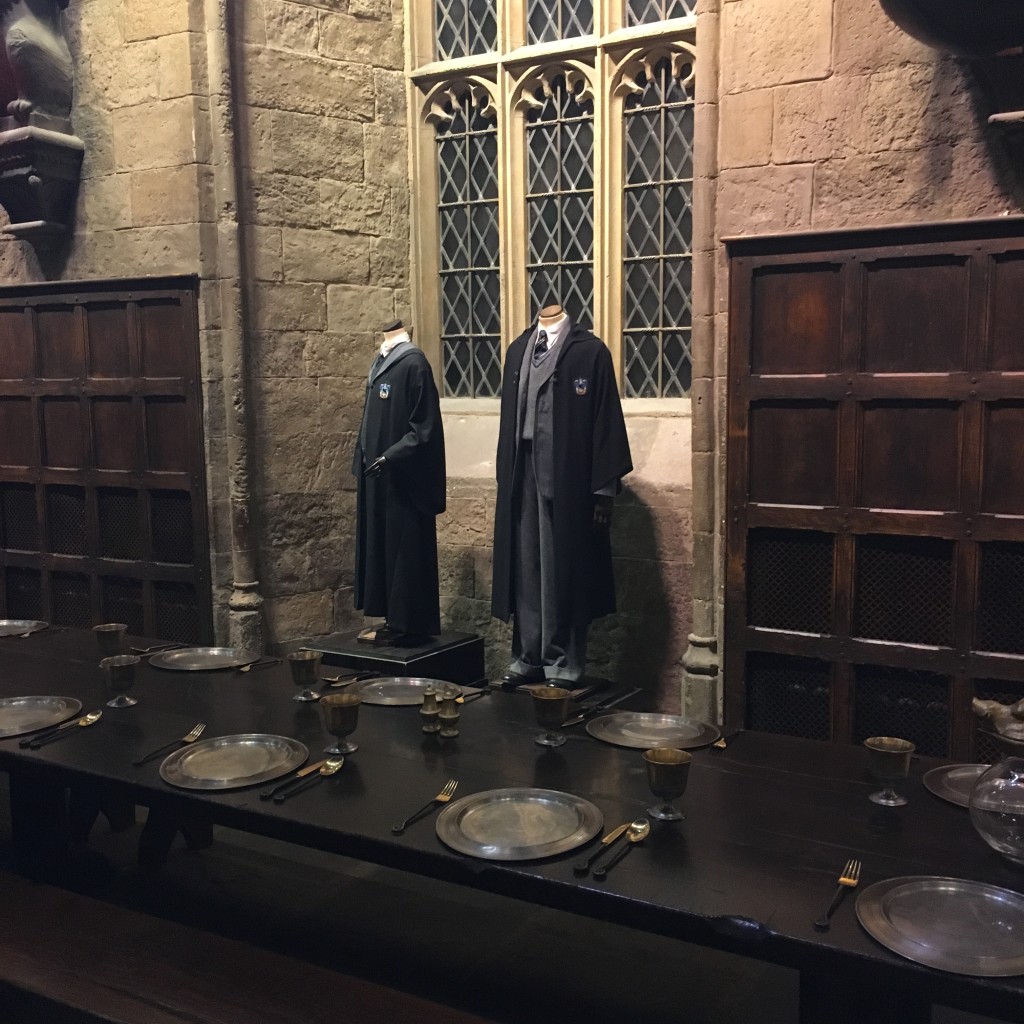 When the short film finished there was a big surprise and we were greeted with the doors to the grand hall. Another interactor got us to get up and gather around the doors before telling us more about the tour. The doors then open and you get to go through and explore the grand hall. The interactor continued to tell us lots of interesting information about the grand hall and all the different houses etc. 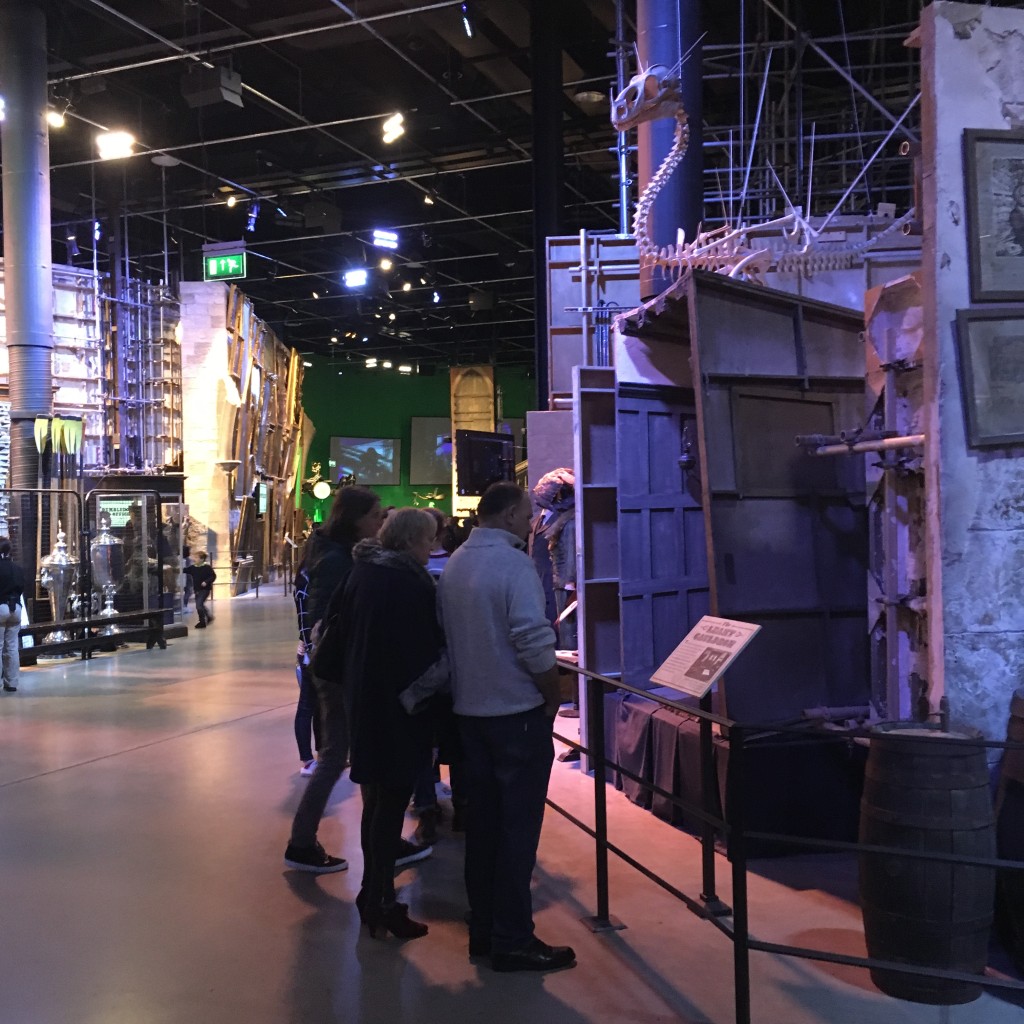 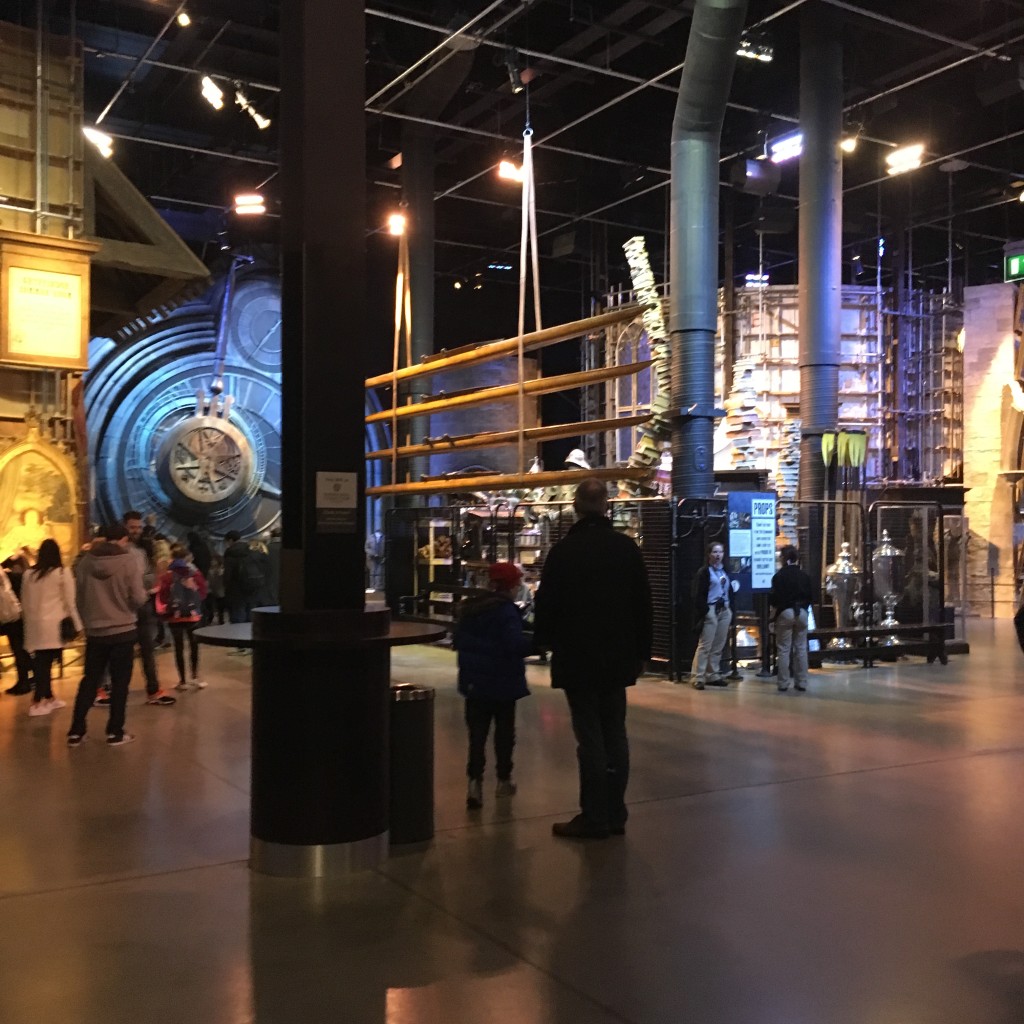 After this we were left to our own devices. Lots of people had the digital guides but being there with a toddler was never going to allow for that, so we just winged our way around the place. It was so much bigger than I expected! In the first studio there was: 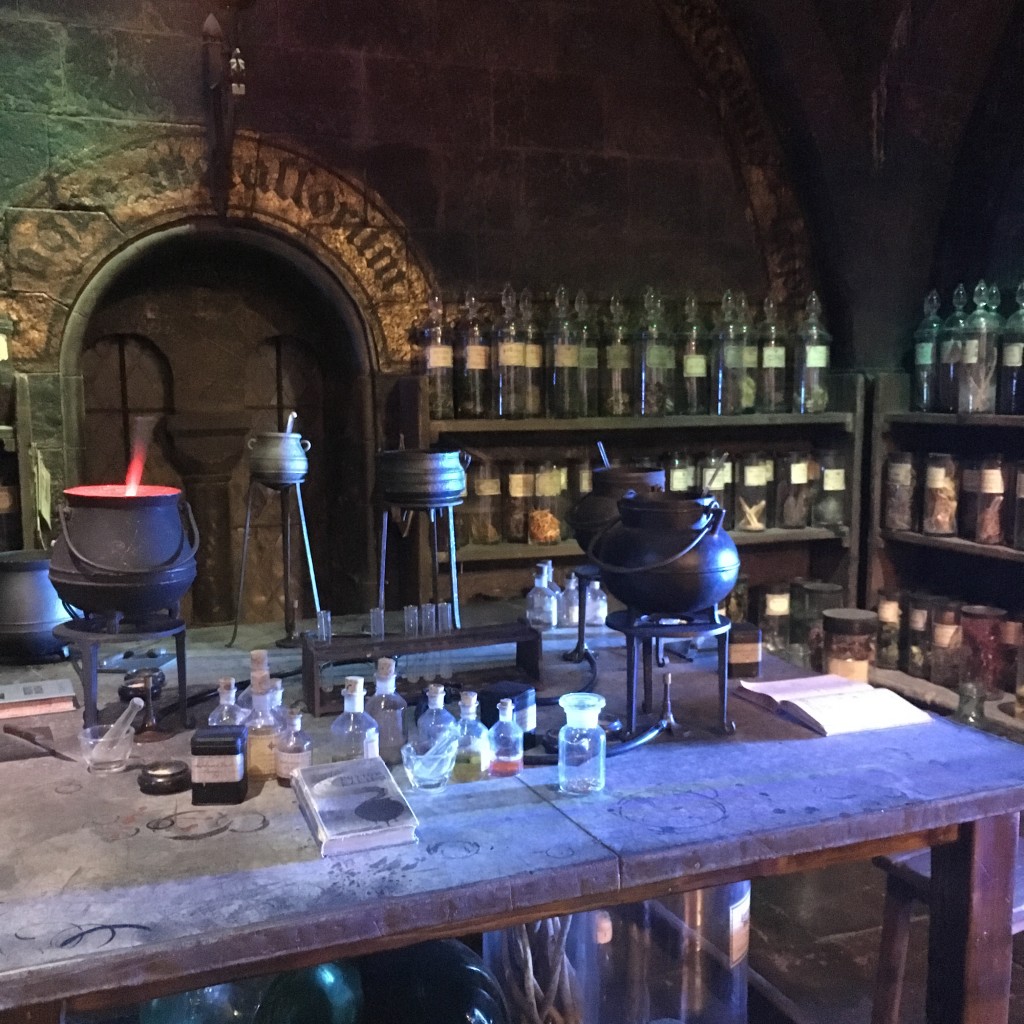 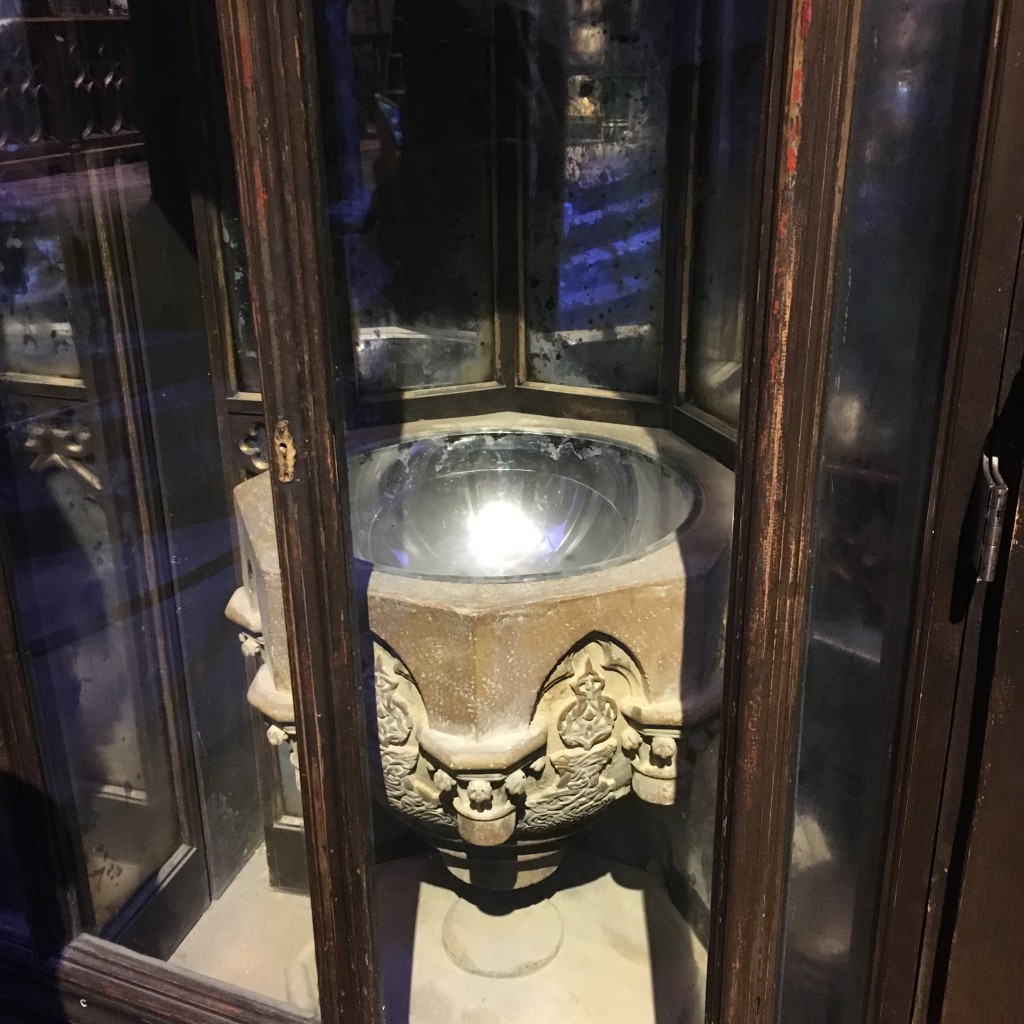 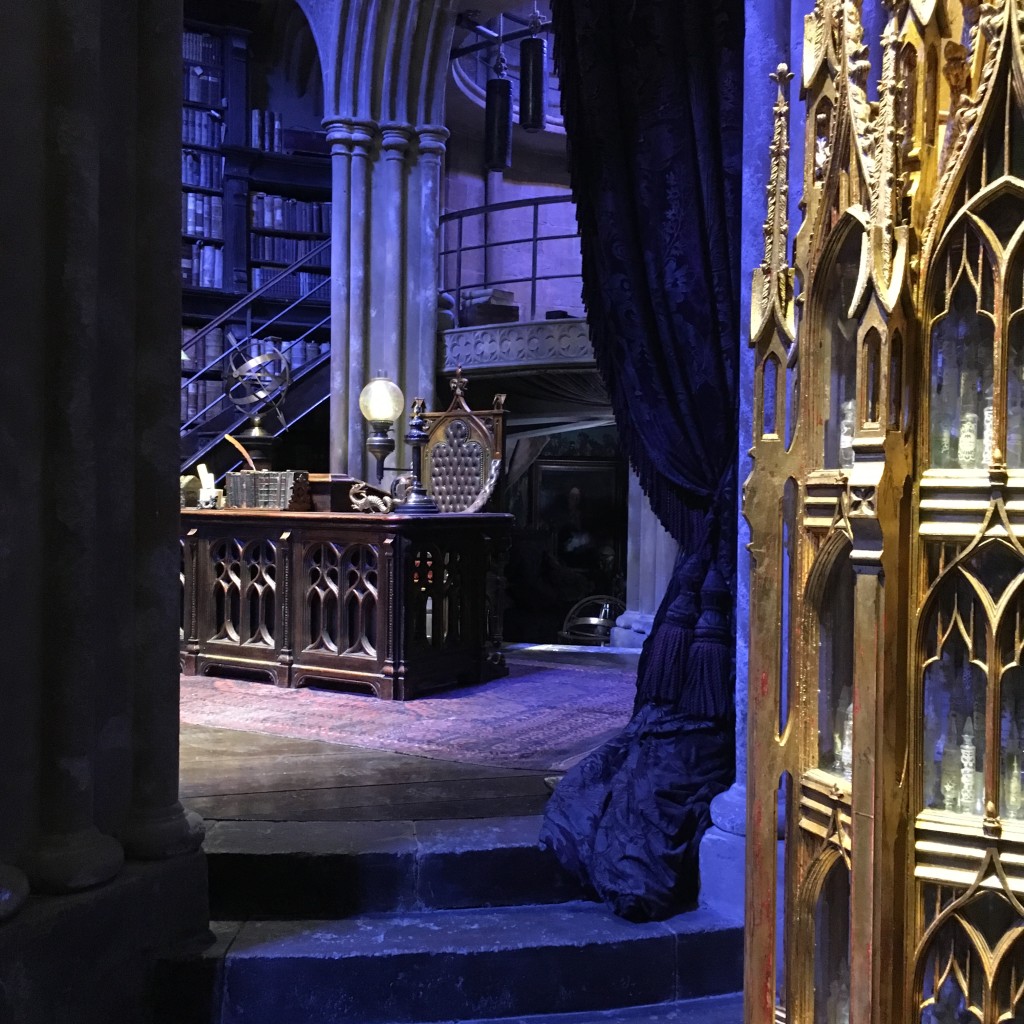 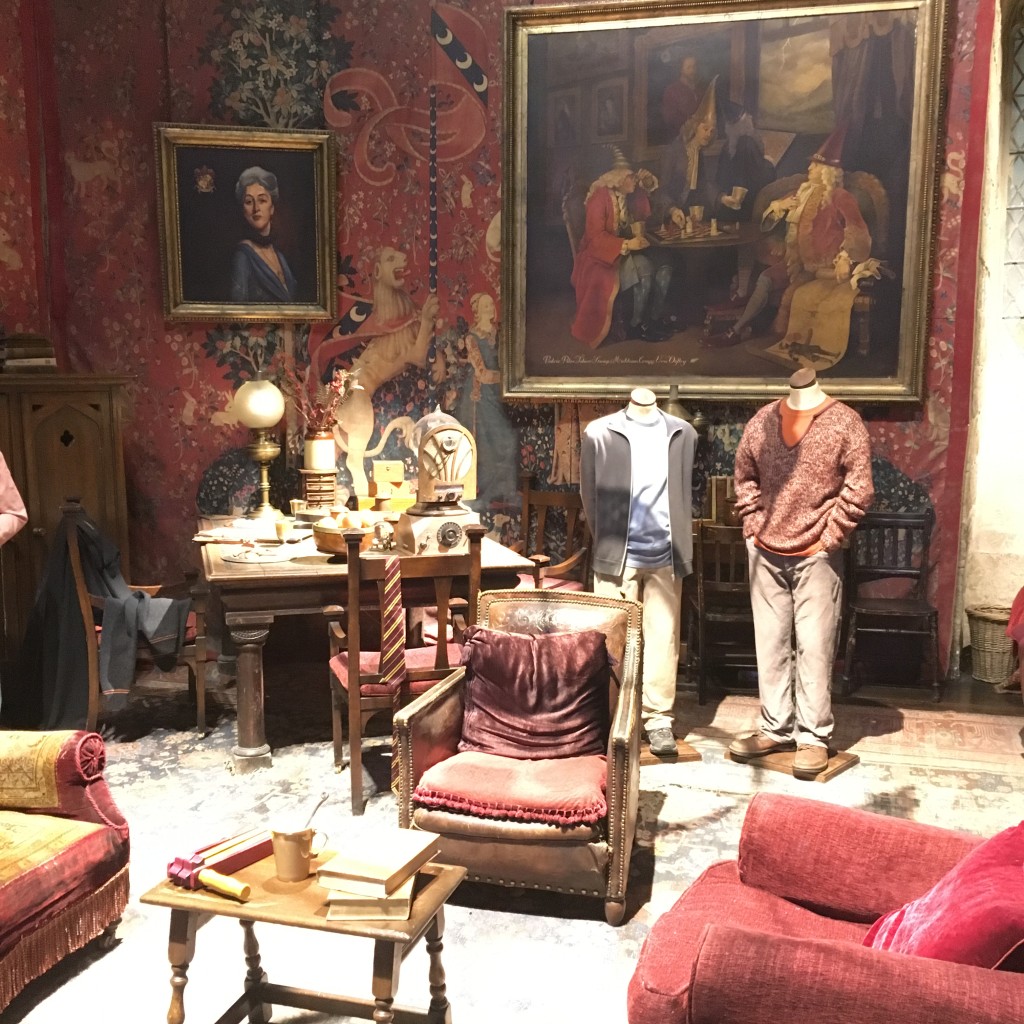 What fascinated the husband and I the most was all the cgi and visual section. They explain how so many of the iconic Harry Potter scenes are filmed and it was mind blowing to hear what work goes in to creating all the special effects around certain scenes. So many secrets were revealed! 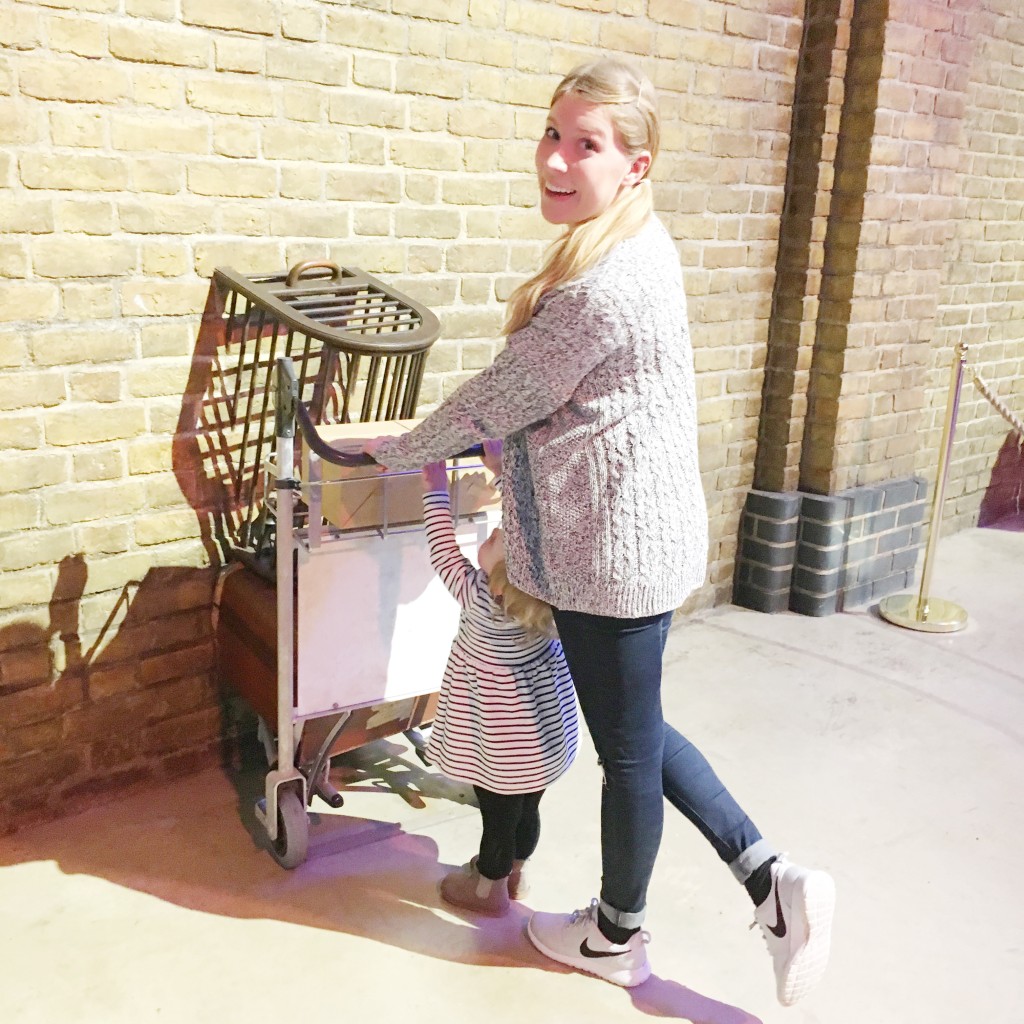 We then went through to Platform 9 ¾. Little I was absolutely thrilled by the Hogwarts Express. She kept pointing and shouting ‘CHOO CHOO’ and then laughed her little head off every time steam came off it. Unfortunately, she wasn’t so keen on getting her photo taken in the carriage set up though. We got moved on pretty quickly by the staff and it was a shame as we find it hard to get photos of the three of us out and about. Never mind, we did get a good photo of Little I and I going through the wall to Platform 9 ¾ though. 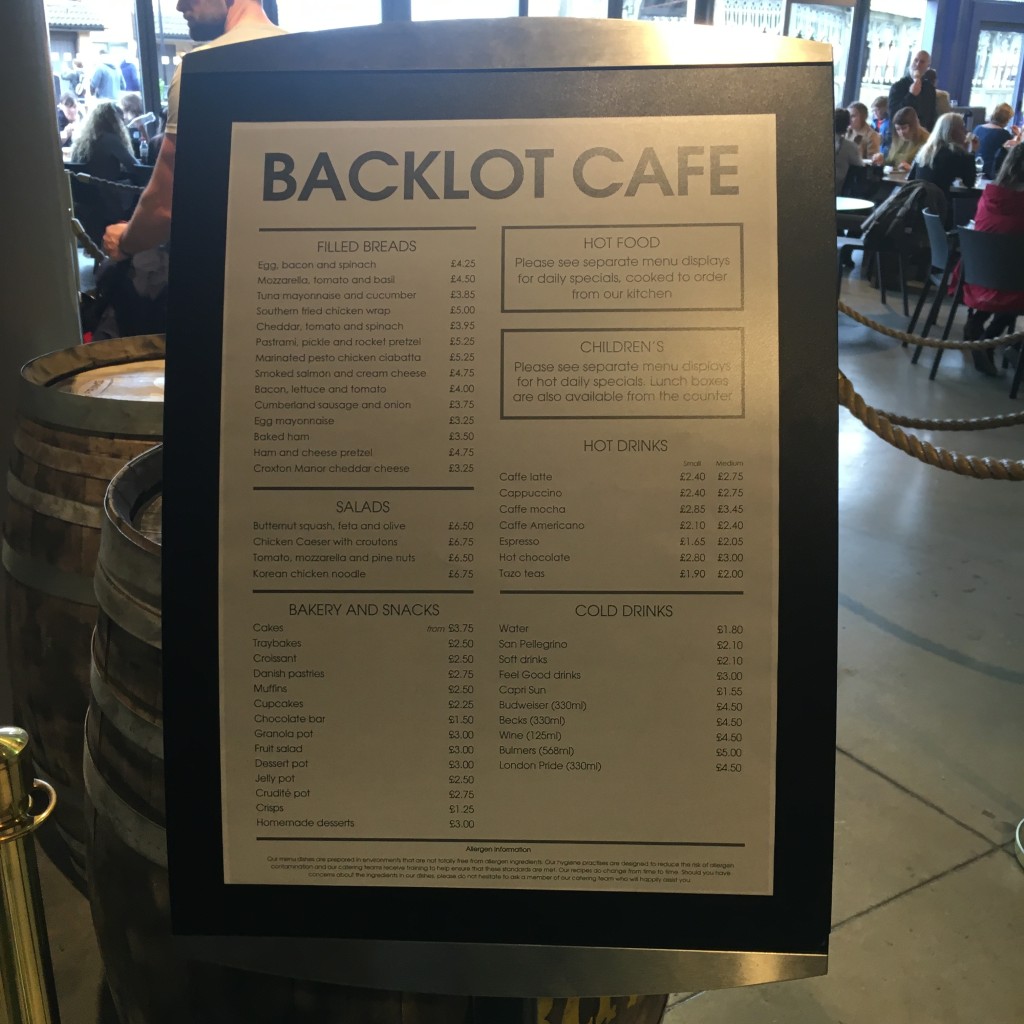 The Backlot Café is situated between the two studios and provides the perfect opportunity to have a pitstop. We had a ham and cheese pretzel, a hot dog and a kids mac and cheese to share. The queues weren’t too long and the staff were pretty friendly. I can’t believe we forgot to try the Butterbeer. Little I was having a rather bad tantrum on the way out so we forgot to go back and get some on our way out. 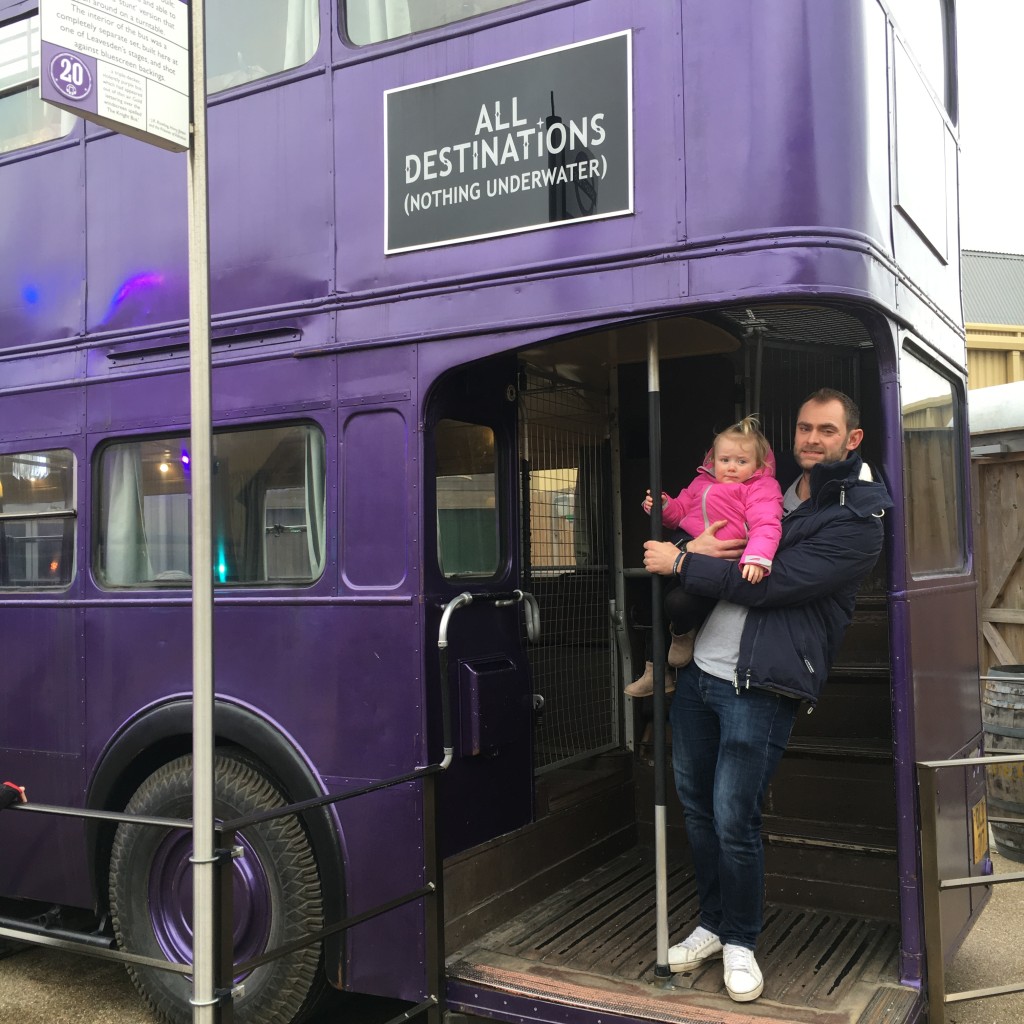 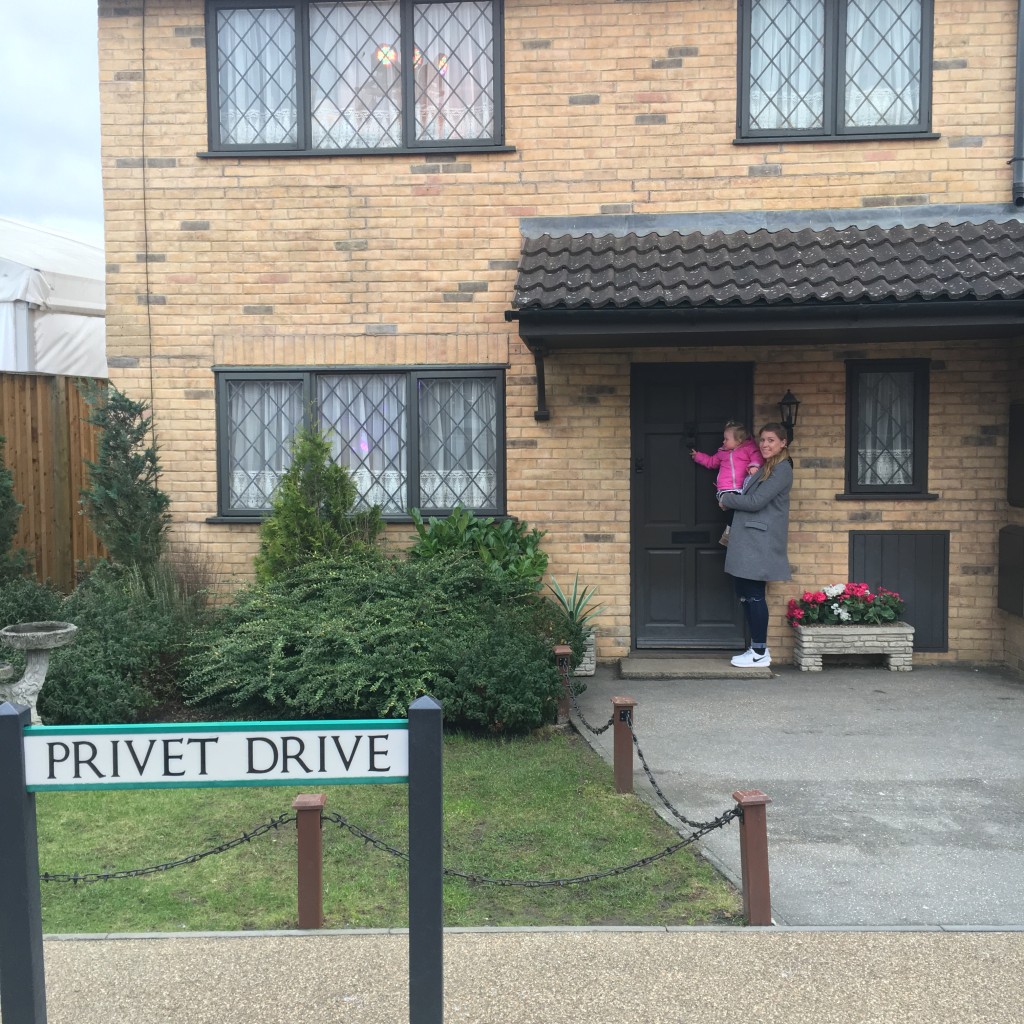 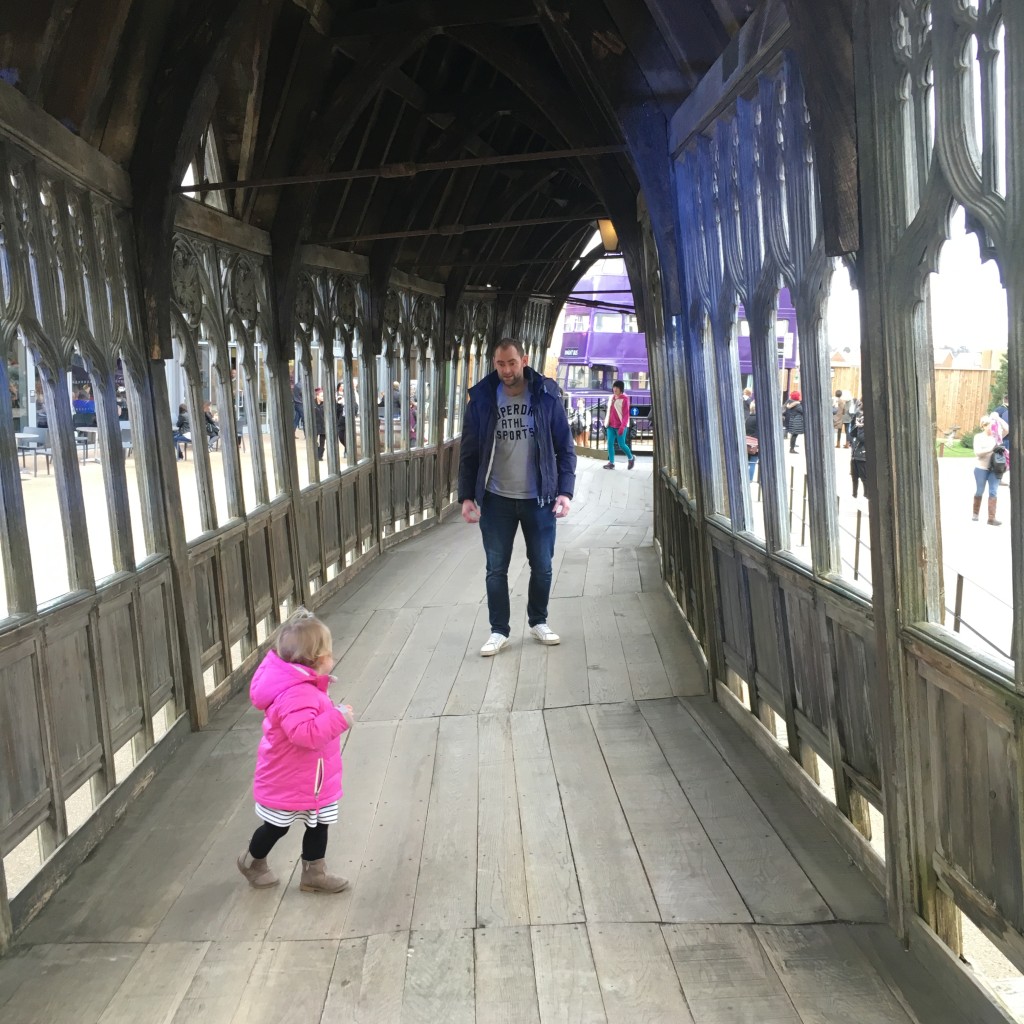 In between the two studios, there is an outside area, called the Backlot, with plenty of photo opportunities. There’s the Knight Bus, Privett Drive, the Hogwarts Bridge, cottage and the Weasley’s car. We took advantage of all of them except the car. The queue was too long and Little I had had enough. 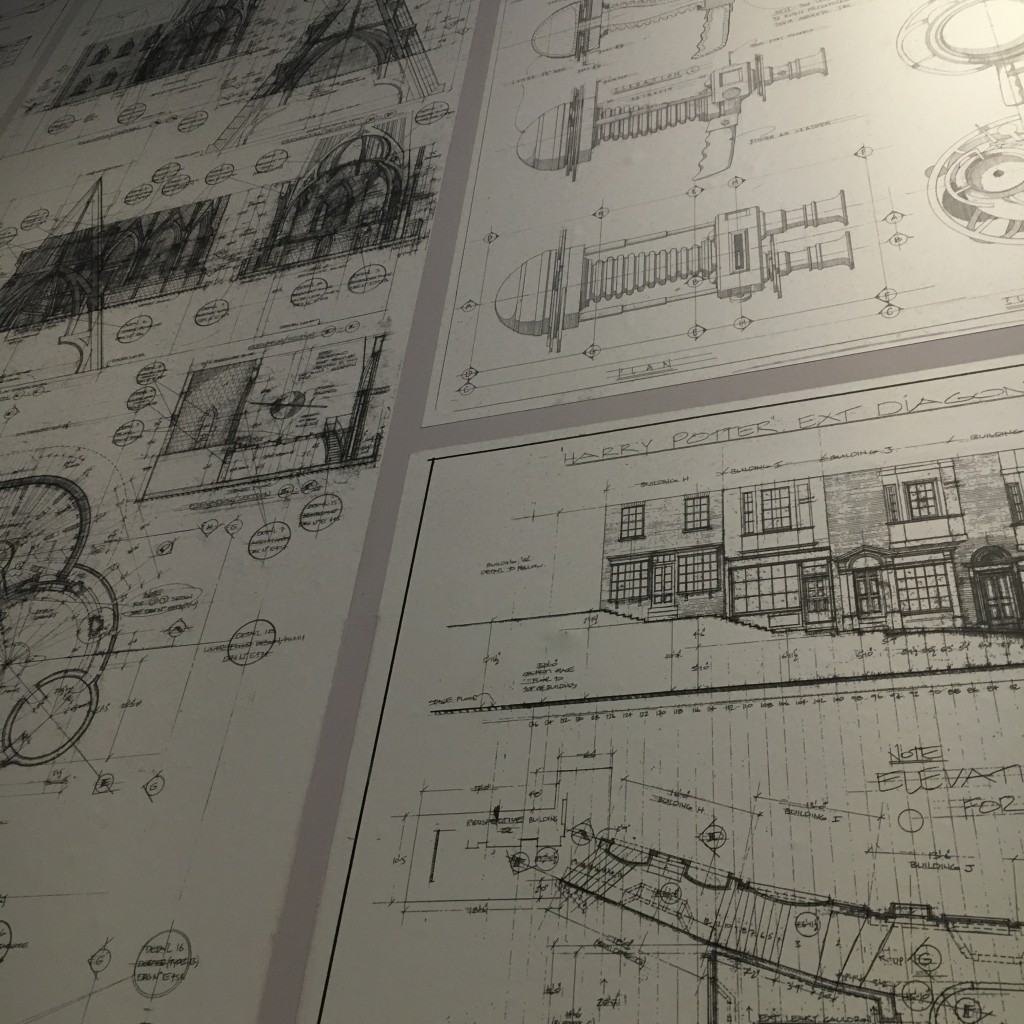 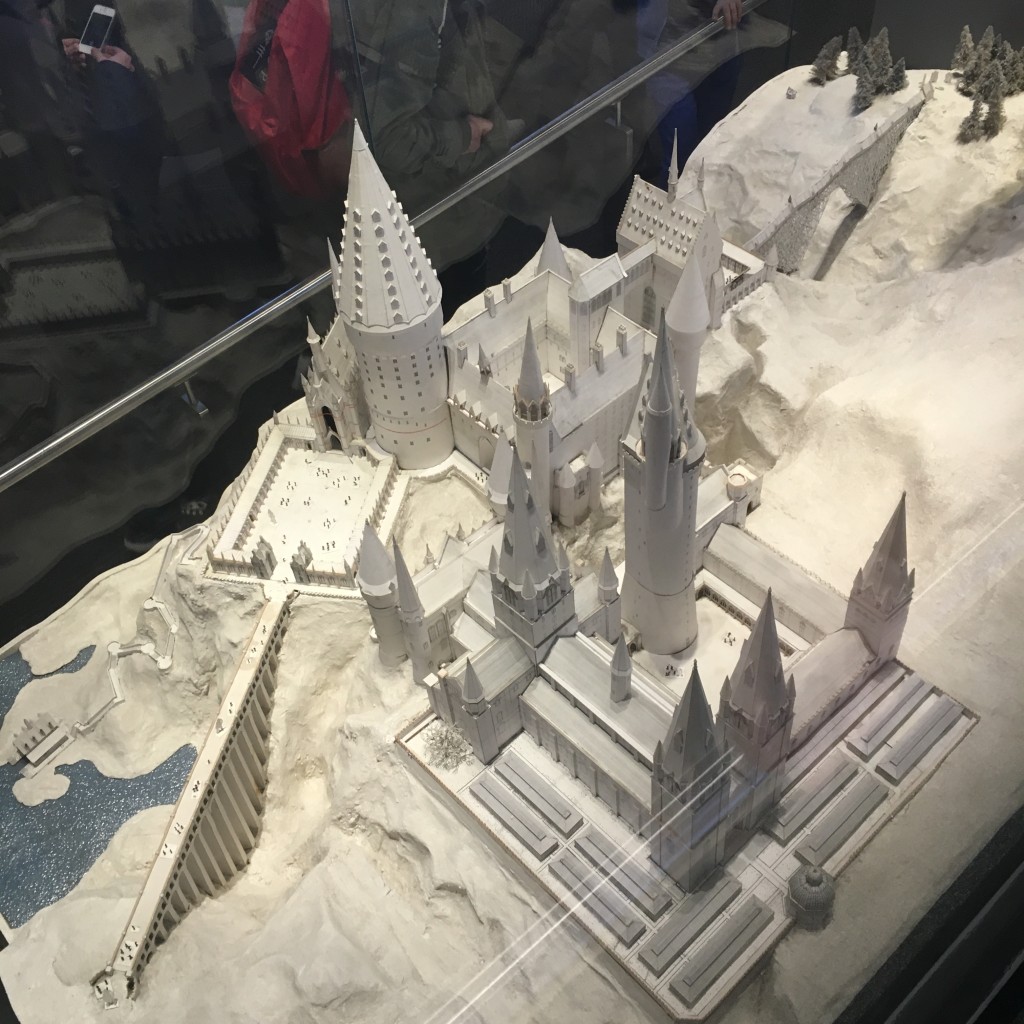 We then walked through to K studio where we saw: 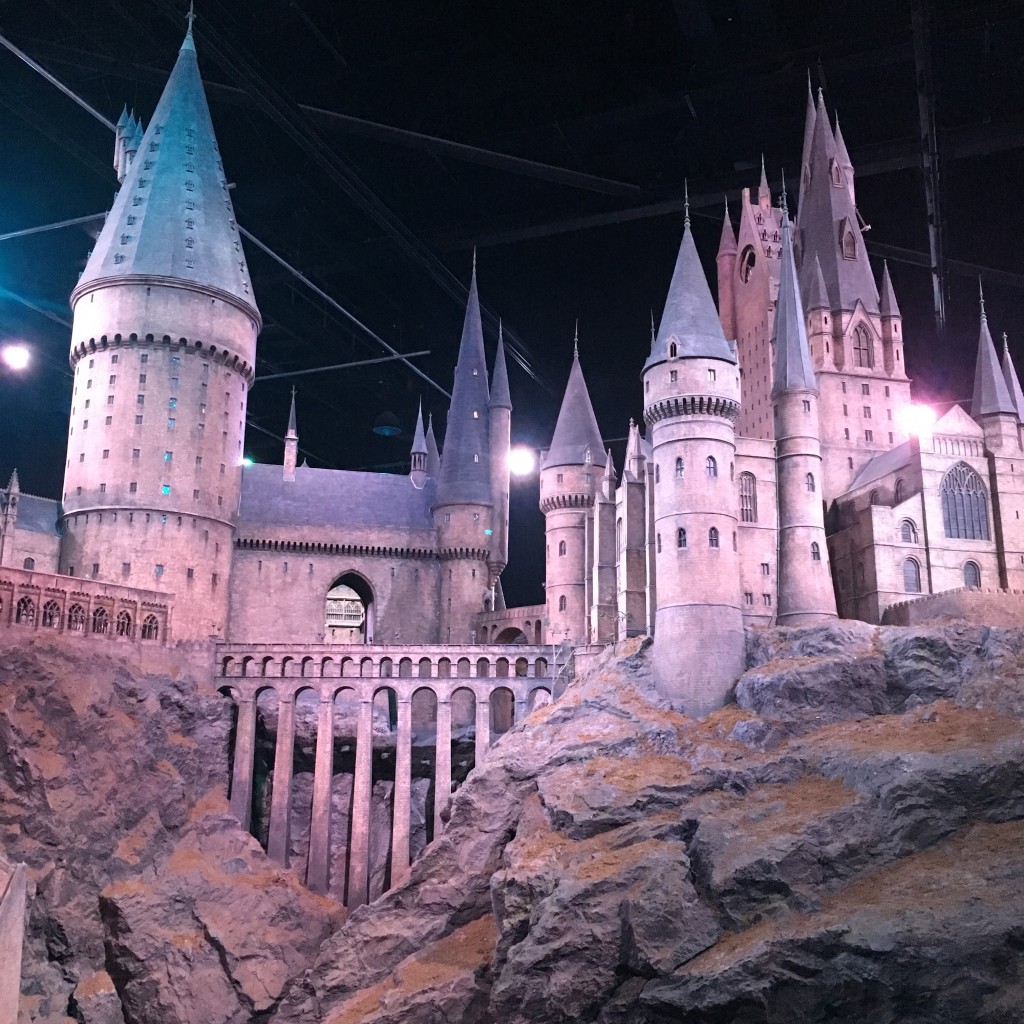 The enormous scale model of Hogawarts school was breathtaking. The detail was unbelievable and you had the chance to see it from every angle because you walk in from the top and walk down and round it. A wow moment indeed. 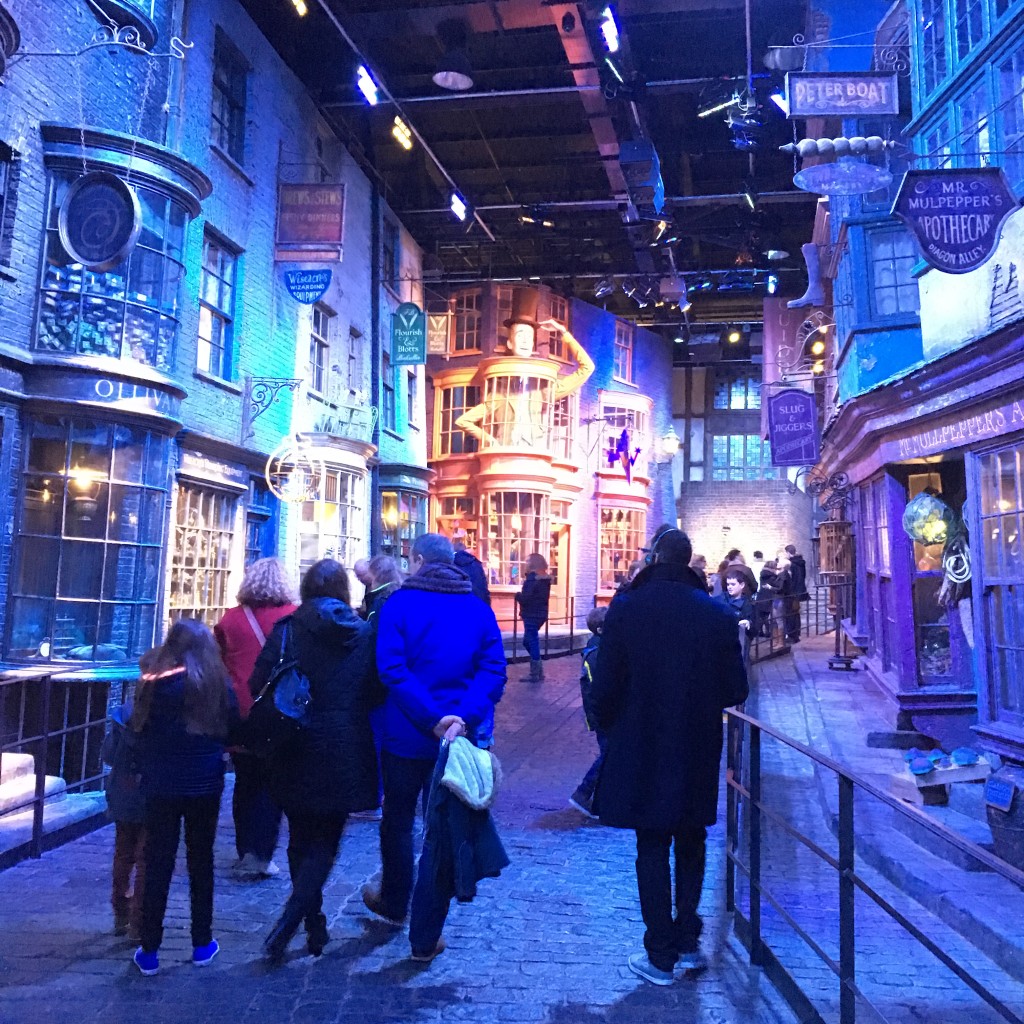 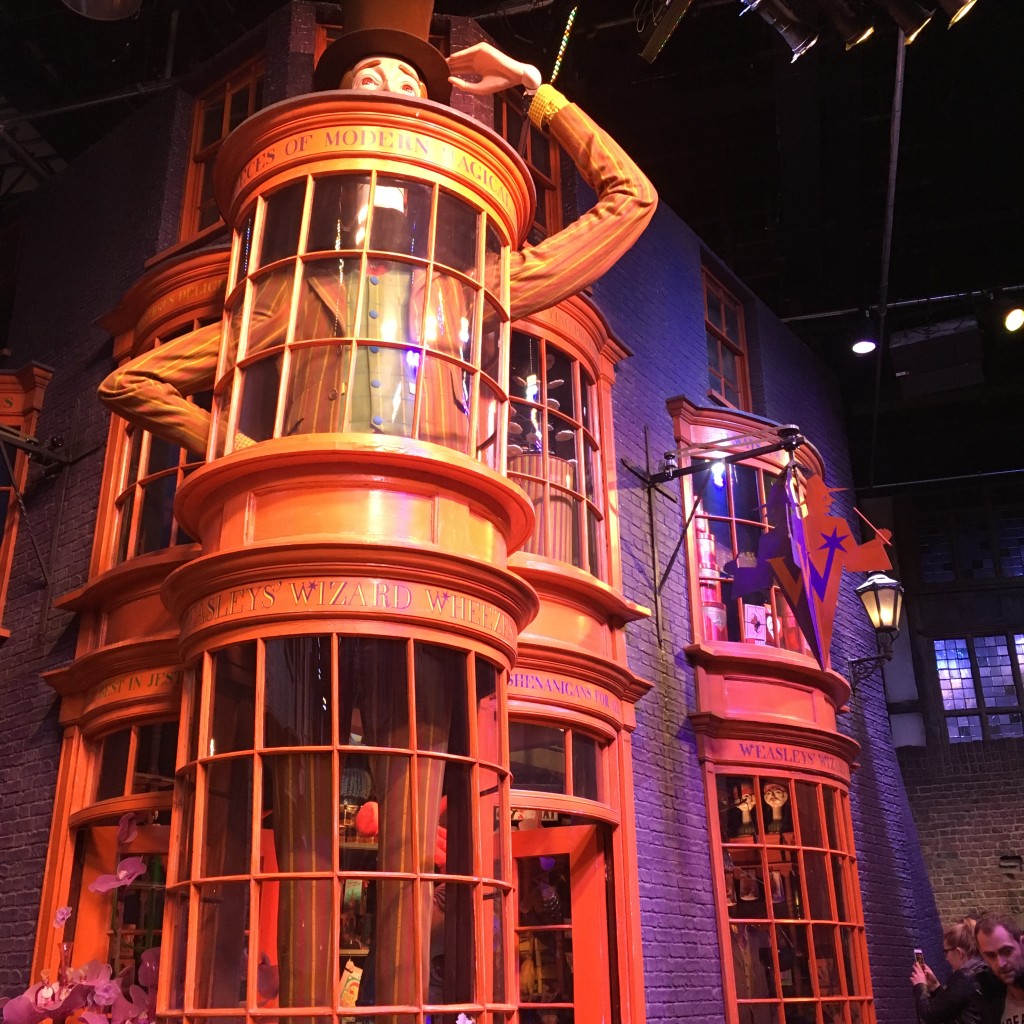 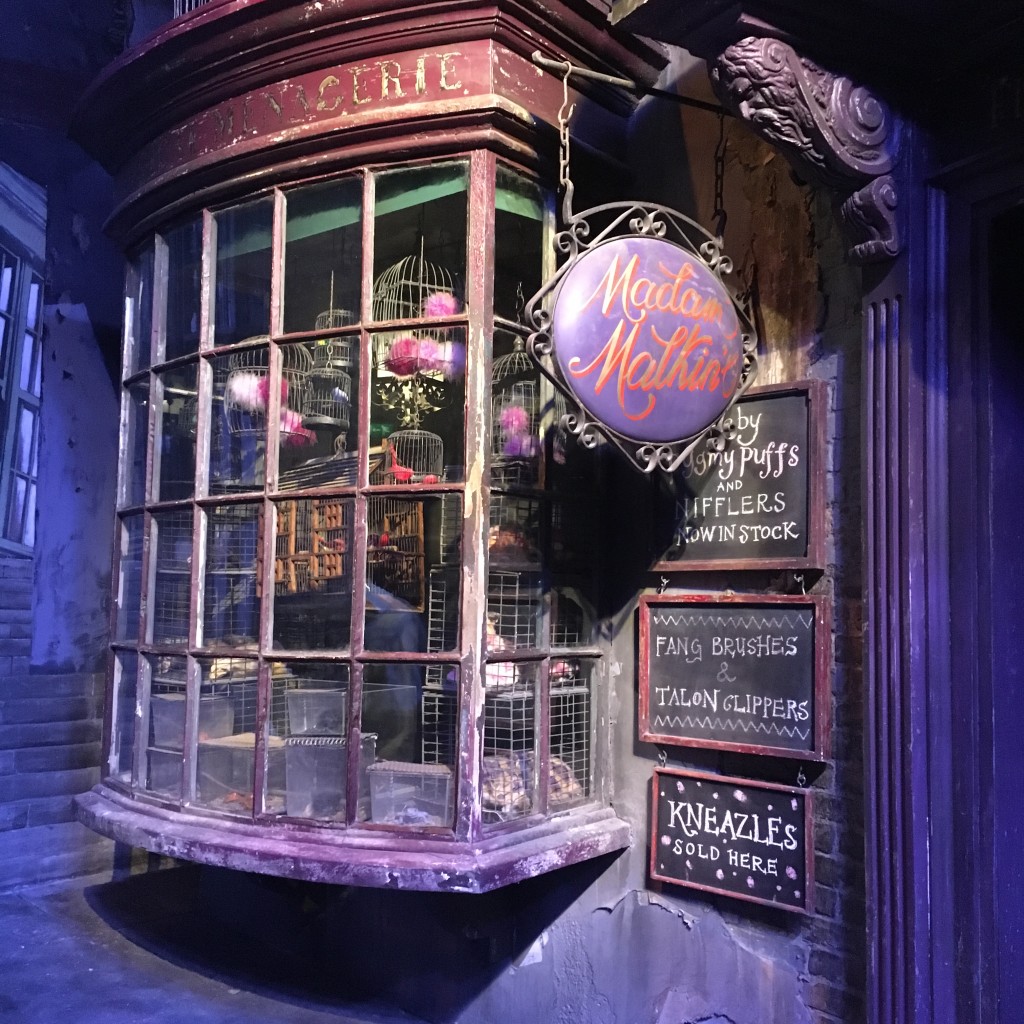 It was so much fun to walk down Diagon Alley and look through all the shop windows. It felt really magical. The only problem was it was really busy so the photo opps were slightly ruined by all those lovely people trying to do the same thing we were! There was one man whose selfie stick almost hit me in the face twice. The husband thought it was hilarious. 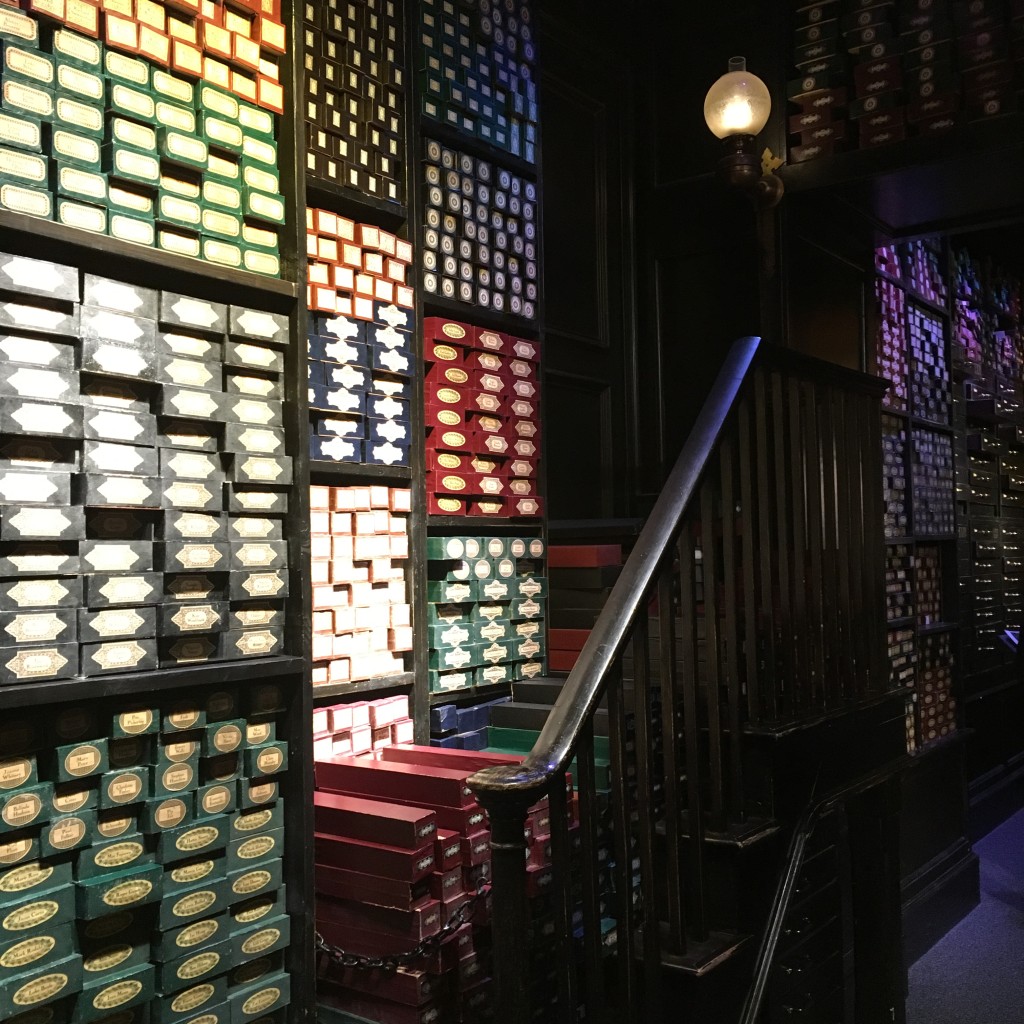 You know how gift shops are usually…well…a bit tacky and full of things you really don’t want to buy but end up buying anyway? This isn’t the case with the Harry Potter gift shop. I genuinely wanted to buy half of what was in there (especially a wand and cape) and it all looked like it was good quality stuff. Sure it’s a bit pricey, but that’s what you get for buying on site. We got Little I an owl puppet that turns it’s head and makes noises. She loves it! 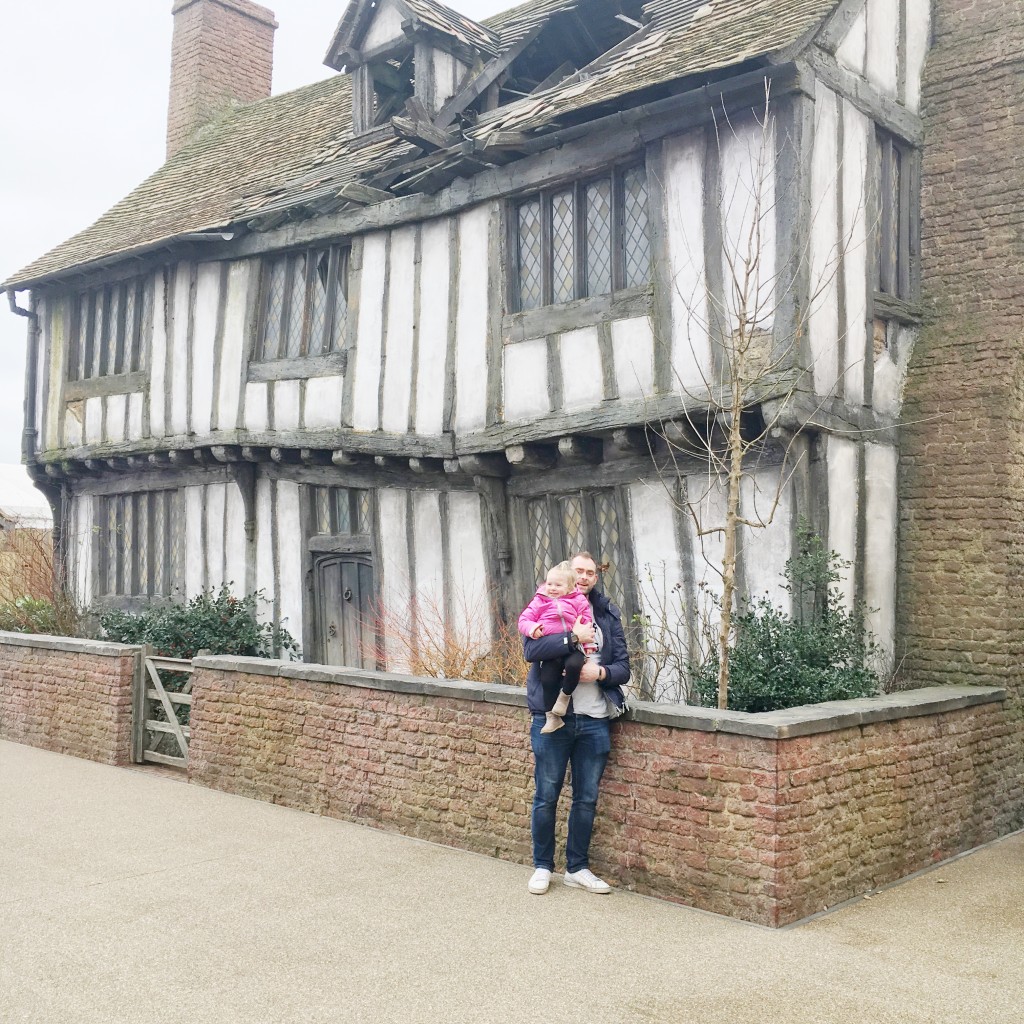 All in all, we had such a good day and have already recommended the experience to friends and family. I feel like I learnt a lot more than I was expecting to, and I was truly blown away by how much work goes into films like these. It’s really fascinating how it all comes together, from concept to big screen. There was so much to do and see and the whole experience is definitely worth the adult ticket price of £35. You can check out more information here and the full range of ticket prices here.

I honestly don’t think you even need to be an avid Harry Potter fan to enjoy the tour. You will learn so much about film making and the behind the scenes action, which is an incredible experience in itself.

Don’t forget to check out the vlog as well:

Thank you very much for having us Warner Brothers. Now if you’ll excuse me, I’m off to watch all eight films back to back!

Our Tots Break At Haven Littlesea